What's that on your head?

.
Tonight the vigil of Pentecost begins.
The happy festival has to be one of the strangest on the Christian calendar.
Or so it appears to this Jew (and probably to quite a few Christians too).
Let's admit it--the mystery and the drama of the Church is fascinating.
. 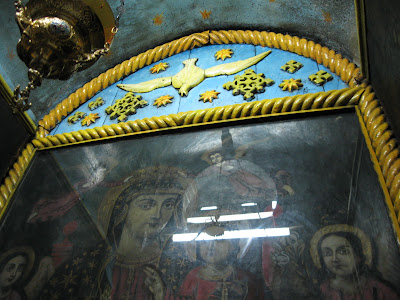 As we said in yesterday's post, Pentecost is all about the Holy Spirit.
The symbol of the Holy Spirit is the dove, especially the dove descending.
This dove above a picture of Mary is in the stairway to the Ethiopian chapel in the Church of the Holy Sepulchre.
And if you can get past the reflection, you can see two angels adjusting Mary's crown. (One of her names is Queen of Heaven.)
. 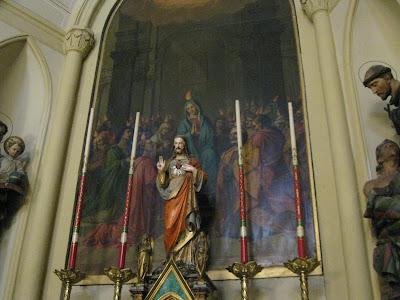 Now we get to the best part!
The Book of Acts says

And suddenly from heaven there came a sound like the rush of a violent wind, and it filled the entire house where they were sitting. 3Divided tongues, as of fire, appeared among them, and a tongue rested on each of them.

This tall painting in the Latin Patriarchate church actually shows these tongues of fire!
. 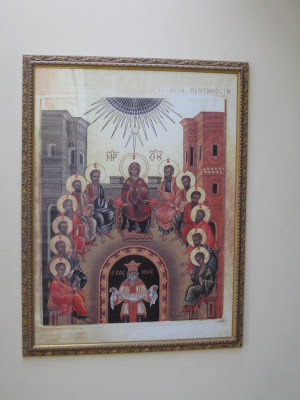 And here, in Notre Dame de Jerusalem, is a picture of the famous icon of the Feast.
It is known as "The Descent of the Holy Spirit."
Again the tongues of fire, and even their source!

But who is that king below the Apostles and Mary?
The website of the Greek Orthodox Archdiocese of America offers the interpretation of the icon and a good explanation of Pentecost (recommended!):

Below the Apostles, a royal figure is seen against a dark background. This is a symbolic figure, Cosmos, representing the people of the world living in darkness and sin, and involved in pagan worship. However, the figure carries in his hands a cloth containing scrolls which represent the teaching of the Apostles. The tradition of the Church holds that the Apostles carried the message of the Gospel to all parts of the world.

If you are one of the millions who celebrate this day, Happy Pentecost!
Thanks to the readers who responded to yesterday's photo with such very touching comments.
.
Posted by Dina at 9:16 PM