Revitalization of a drained swamp--the Hula

.
On a cold and rainy day last week our tour guide took us to the Agamon Hula Ornithology (Bird Watching) and Nature Park.
It lies in the Great Rift Valley and is north of the Sea of Galilee. 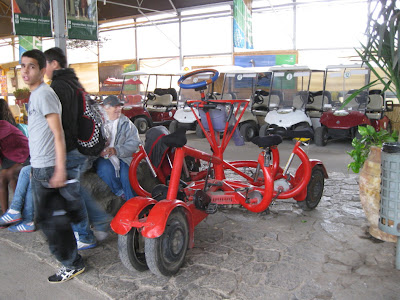 At the big Visitor Center were some of the quiet modes of transportation permitted in this special nature reserve, like this family bicycle complete with a baby seat in the middle. 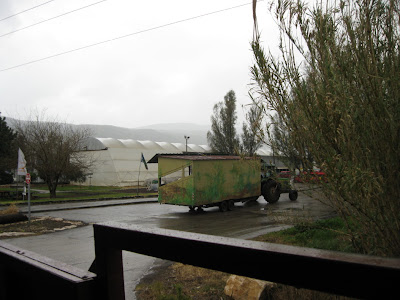 Our group of 37 would go in a safari wagon, seen here from the back. 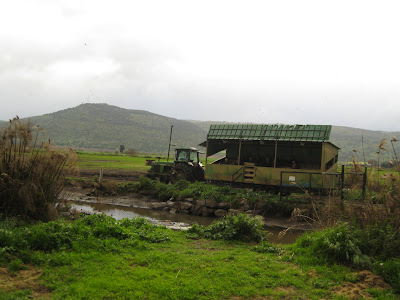 The man on the tractor doubles as driver and guide.
At sensitive places he whispers into the microphone. 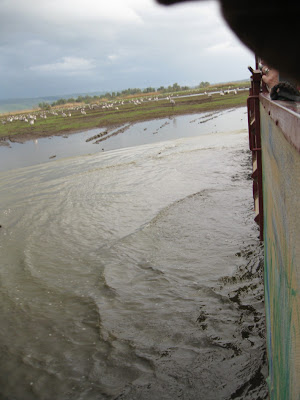 It had been raining a lot and we had to ford this flooded spot on the track. 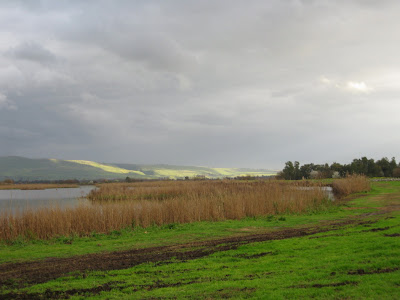 A few rays of sunlight broke through and painted the distant hills of Naftali a bright green. 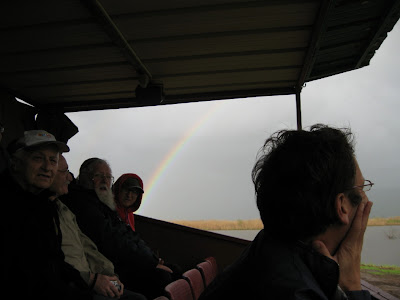 And created a rainbow too! 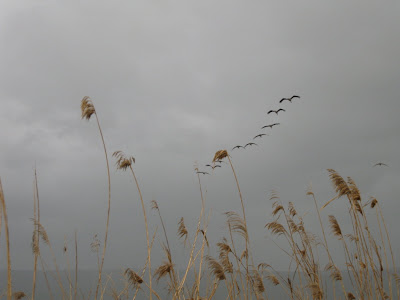 We sighted our first birds up over the papyrus. 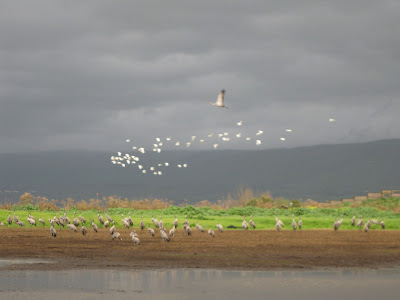 A flock of small birds looked so pretty against the dark background of clouds and mountains. 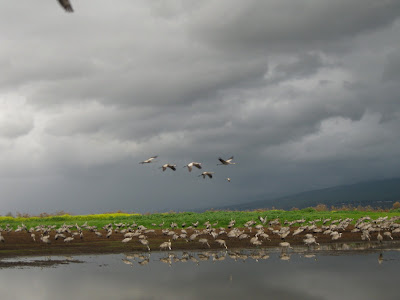 Finally we came to the Crane Observatory where the standing cranes made a nice reflection for Weekend Reflections and Camera-Critters.
Go ahead, enlarge the photo, enjoy! 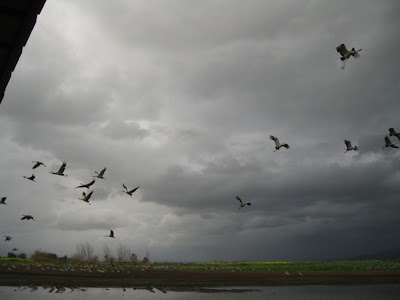 Our safari wagon sat quietly for a while, but when we inched forward, the cranes knew their limit and took off.
It was exhilarating to see and hear these big birds fly right past us!
.
Twice a year 500 million (!) waterfowl, birds of prey, and song birds from 400 species fly over this area on their great migration between Europe and Africa.
As the brochures says, "The crane is the king of the Hula. In the autumn more than 100,000 cranes fly over the Hula Valley and a quarter of them winter here and fill it with their cheerful uproar."
.
In the pre-State years many pioneers in this region got malaria from what was seen as "the malaria-ridden swamps of the Hula" and in the 1950 the Jewish National Fund/Keren Kayemet drained the lake.
Back then, projects like this were seen as part of the great Zionist endeavor of "redeeming the land." (See a good explanation here.)
.
However, the mistake of tampering with nature in the Hula Valley soon became apparent as newly dried underground peat deposits ignited into smoldering fires that defied all extinguishers' efforts and rendered much of the area unsuitable for cultivation.
And phosphates and nitrates in the earth were washed into the Sea of Galilee, polluting its water.
So the JNF/KKL went back and reflooded part of the valley in 1995 and annexed it to an existing nature reserve.

This is what some Israelis sarcastically call "redeeming the land from the redeemers."
.
For more details see Wikipedia and/or the Hula Reserve page.
The park that you see in my photos even has a Facebook page called Agamon Hula.
.
More about my 4-day guided tour in the North in the coming days.
Shalom!
.
Posted by Dina at 7:45 PM