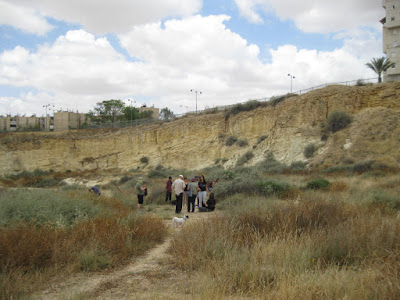 A nice, comfortably small group turned out for one of the Jane's Walks on Friday morning.
Shir was our good guide, extolling the value of slow meandering, taking us through fun exercises in positive psychology, and opening our eyes to better engage with nature. 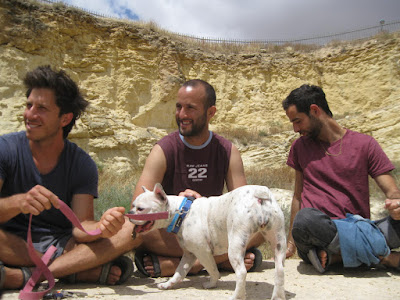 Nice boys, eh?  I think they are students at Ben Gurion University of the Negev.
One studying geology said that we were sitting in part of a canyon formed millions of years ago, the Afiq (Gaza-Beersheba) canyon. 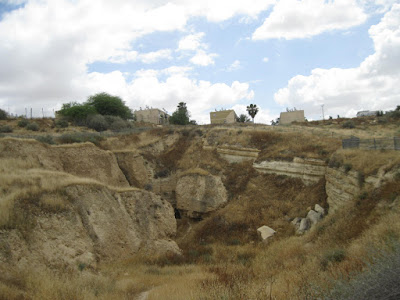 Today the quarry is in between Beer Sheva's residential blocks.
Its area is about 8 acres and it is very deep.  And very exciting!
(With a click or two you can enlarge the photos.)

The Ottomans (who controlled our area for 400 years) quarried stone here from 1900 to 1917  to build  their city of Beer Sheva (the area now known as the Old City). 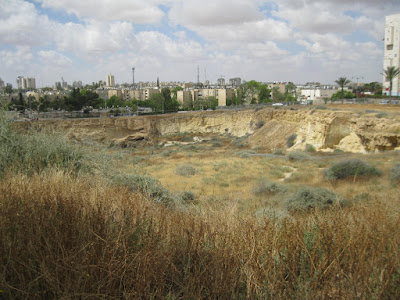 Let us pray the quarry never becomes a construction site!
I hope it stays wild, but the next-best thing is an envisioned Geo-botanical Park and Center for Environmental Education in conjunction with the Nature Protection Society.

One of the more underrated projects in the 2020 brochure is “The Quarry,” which lacks, at this point, a targeted completion date. To Beersheba activist Ethelea Katzanell, that’s unfortunate. “The quarry – a hole in the heart of the city – is really an important ancient geological site located between the Bet and Daled neighborhoods,” she says. “Lots of people don’t even know it’s there – it’s fenced off, so you’d have to make a special effort to see it. “I’m surprised this project isn’t being pushed forward – it has a big potential for quick implementation, and doesn’t involve a tremendous amount of money.”The influential Katzanell serves on a host of city advisory boards. “I’m on the Environmental Committee, the Historical Site Committee and both the Tourist and Beautification Committees,” Katzanell laughs, as she ticks the assignments off. “Anything having to do with what the city offers people, both residents and tourists alike. To me, the Quarry is such an important asset to Beersheba, and one so close to completion, we should be moving ahead on this now. “The history is fascinating. It started back in the 1980s. when the BGU Geology Department studied the area and proposed turning the quarry into a geological site – you can see the strata going back millions of years. They presented the idea to the city as an educational and tourist site very much like other geological sites all over the world. Nothing happened. They couldn’t find a sponsor.“In 1994, the project was resurrected. An English version of the proposal was written up and presented again. All the city offices signed off on it, permits were approved, everything was ready – even a sponsor had been found, a French donor. “Just as it was ready to go, the sponsor, for whatever reason, withdrew. And the project dropped out of sight, again.“In 2007, I heard a rumor that the project was going to be killed – that a tower was going to be built on the Quarry site,” Katzanell continued. “I was horrified. I rewrote the project for a third time, included everything that had been proposed before, and turned it over to “Earth’s Promise,” a local environmental organization. Together with their experts, geologists and environmentalists, they proposed the creation of a Geo-botanical Park and Center for Environmental Education, in conjunction with the Nature Protection Society. The Park would include all the geographical distinctions, the strata marks, plus all the unique local vegetation for teaching and study.

“I’m surprised another sponsor hasn’t been found. This is a relatively modest project in terms of cost, and the city has already signed off on it. The Quarry Project could be completed pretty easily. I’m hoping that now, in 2010, we can finally move ahead with this.”

(Linking to ABC Wednesday and Camera Critters.)
.
Posted by Dina at 6:32 PM