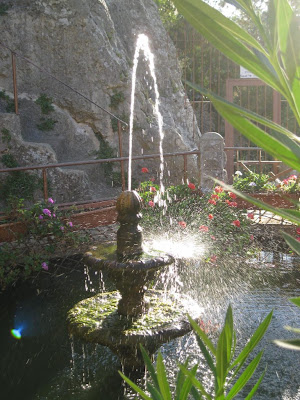 On  Rosh Hashana afternoon it is customary to do the Tashlich ceremony.
.
In the biblical book of Micah (7:18-19) it says:
"Who is a God like you, pardoning iniquity and passing over transgression for the remnant of his inheritance? . . . You will cast all our sins into the depths of the sea."

"You will cast" in Hebrew is the verb tashlich.

The Jerusalem region has no sea or lake or river.
I am lucky to live  a short walk  from a spring-fed fish pond. 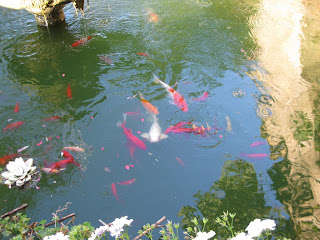 The fish had a feeding frenzy!

Part of the symbolism is that a fish has no eyelids and cannot close its eyes, and so  too  may God always keep his eyes open watching over us.

You can see the nice Tashlich prayer here.

Shava tova -- let the new year be a good one.
.
UPDATE: The newspapers now have photos of where Israelis like to go for Tashlich .
.
Posted by Dina at 10:39 PM