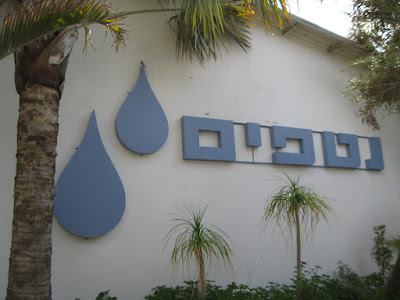 Kibbutz Hatzerim is a big and successful and still fully-communal kibbutz in the Negev desert.
We had lectures, a film, and a group tour there a week ago, as I started to show you in this first post. 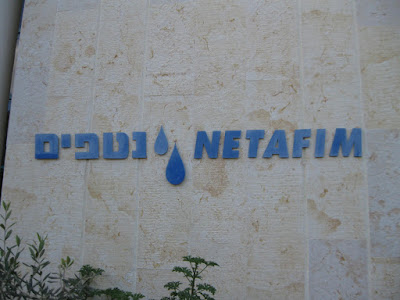 As you can tell from the writing on the wall, their main factory is called Netafim and it is the world's pioneer in drip irrigation. 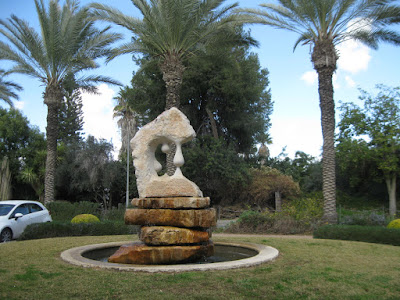 To my dismay photography was not allowed inside the huge and fascinating factory.
I was amazed to walk among so many rapidly- and constantly-clicking machines that work round the clock, day and night.
Everything is automated; you see many robots but very few humans in the plant.
Germany produces many of the machines specifically for Netafim and each one can cost a million dollars.
Out in the yard tall silos hold little pellets that feed the extruders; at any given time the silos hold a million dollars worth of all kinds of poly-this and poly-that, the raw materials for plastic production. 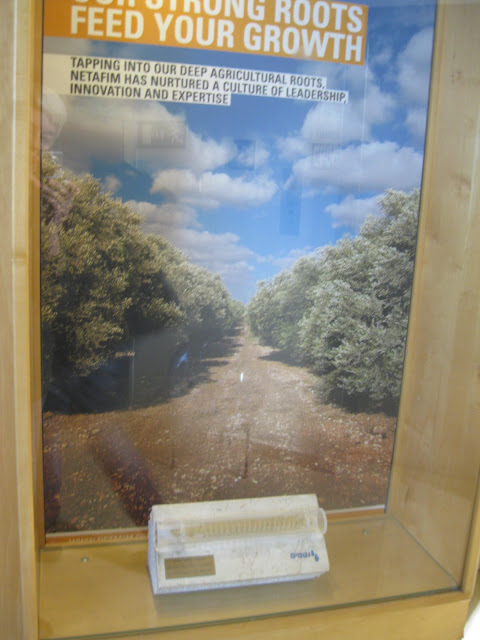 This was the 1965 prototype, the first idea for a dripper.
The poster tells a deep truth.

As this interesting article (about how Netafim is helping Italy) explains,

Founded in 1965, Netafim pioneered the drip irrigation revolution but has since widely expanded its offerings to include sprinklers, pipes, irrigation equipment, agricultural machinery, and more, many of them equipped with sensors that can read temperature, humidity, nutrient levels in the soil, whether a plant needs water, and other important data. The systems are controlled by software run from a server communicating with sensors in the field wirelessly, with the software providing instructions to each part of the system as to how much and when water should be dispensed. 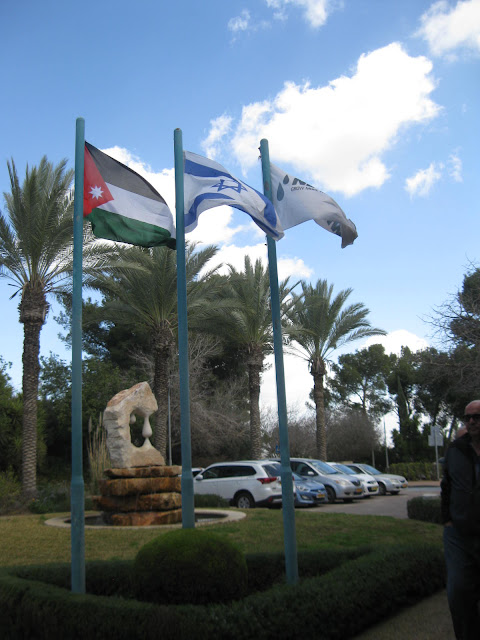 The kibbutz engineers and agriculture experts started teaching drip irrigation in Israel, in the developing world, and in the developed world and within seven years the demand for the equipment from Hatzerim was too great.
So Netafim opened new factories in Kibbutz Magal and Kibbutz Yiftach.
Today it is a huge multi-national success story. 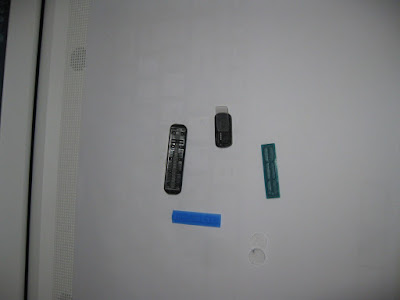 I put my little souvenirs on my laptop to show you how tiny each dripper part is, less than an inch.
The black ones have an ingenious system of  "mazes" and flexible membranes that, when inserted at regular intervals in a hose, regulate the flow and pressure of incoming water and also deal with any grains of dirt that get in.
BTW, fertilizer can be added to the water in perfectly measured doses.

You will enjoy sampling some of the many videos at Netafim's YouTube channel.

This one kibbutz that started from a barren hill in the desert in 1946, with land too salty to grow anything for the first years, is today helping farmers grow more food with less water and less work--all over the world.
Makes me proud.
.
UPDATE August 2017:  Wow!


Mexichem has signed a deal to buy 80% of Netafim in a deal that values the drip irrigation pioneer at $1.895 billion

http://www.timesofisrael.com/mexican-firm-to-buy-israel-drip-irrigation-jewel-netafim-report/
.
Posted by Dina at 10:45 PM