Kvittel into (and out of) the Kotel

.
A nun friend and I visited the Kotel this afternoon.
In Hebrew, Kotel refers to the Western Wall (formerly called the Wailing Wall). 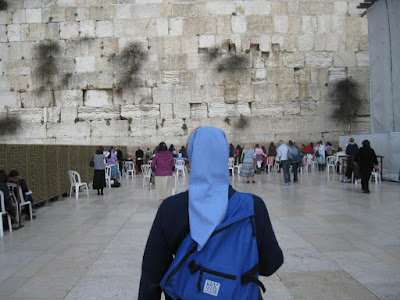 Following Jewish tradition we each wrote a kvittel (the Yiddish word for a little note) to God, 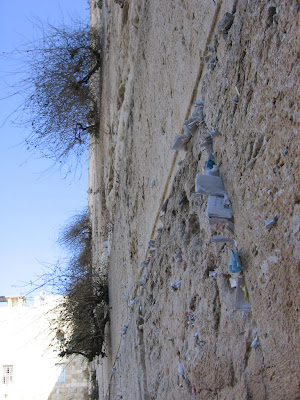 folded them up, and pushed them into spaces between the ancient stones. 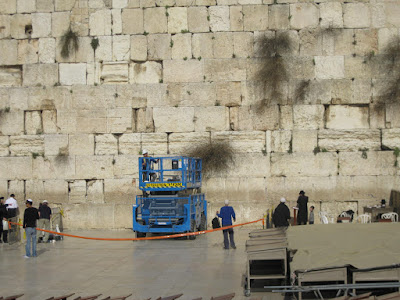 But I heard some strange sounds from over in the men's section.
Peeking through the divider, I saw men scooping out the thousands of prayer notes with wooden sticks, under the supervision of the Western Wall Rabbi.
Just before Passover and before Rosh Hashana, God's Kotel "mailbox" is emptied.
The notes are buried, unread by human eyes, in the nearby ancient Mount of Olives cemetery, with much respect.
But what I did not know is that twice a year the huge stones are tested to make sure the Wall is not leaning.
Rabbi Ravinovitch today told an interviewer from Ladaat.net, “You can see the crane here now, engaged in those very tests, to make sure that no one will be endangered, Heaven forbid."
I did indeed see the crane and we were not in any danger, thank Heaven!
.
(ABC Wednesday today features, as you may have guessed, the letter K.)
.
Posted by Dina at 9:56 PM