March 18 is always a beloved day for me. On that date in 1968 I first reached the shores of Israel, making aliyah. (More about why in my 40th aliyah day post from a year ago.)

Just out of college, I had almost no money and found the cheapest route: a standby flight from Chicago to New York, Icelandic Airlines via Reykjavik to Luxembourg, buses and a train down to Genoa, and a ship to Haifa. Phew!

Imagine my surprise when the ship left Genoa and headed west instead of south! We were going first for a stop at Marseille, it turned out. And then back to another Italian port. Then through the tight Straits of Corinth, docking in Piraeus (with several hours ashore to see Athens), over to Limassol in Cyprus. Finally, as the sun rose over Haifa, I reached the promised land! 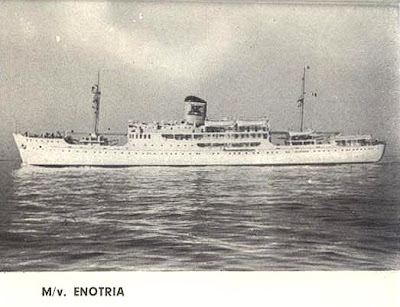 Photo from Maritime Timetable Images, from the collection of Björn Larsson, with thanks.
This was my home on the Mediterranean Sea for seven days--the good ship Enotria!
A tiny cabin with bunkbeds in the nethermost part of the ship, with a porthole just above sea level. I remember one stormy night the three girls in the cabin were seasick. I stayed on deck, hanging on for dear life, letting the salty spray refresh me, loving every minute of the rocking and rolling.

Today I did some research, out of nostalgia and love.
The Enotria and the Messapia of the Adriatic Line were built in the early 1950s. This pair of small ships sailed around the Mediterranean out of Italy. In 1975 both ships were sold out of the fleet as Muslim pilgrim ships. The Enotria was lost in 1980 when she was driven against the Piraeus breakwater. Her sister followed her later to the wreckers.
Poor Enotria. God rest her soul. She brought me home.
.
Posted by Dina at 7:03 PM