.
Hebrew hapax legomena -- that is our topic in honor of H day at ABC Wednesday. 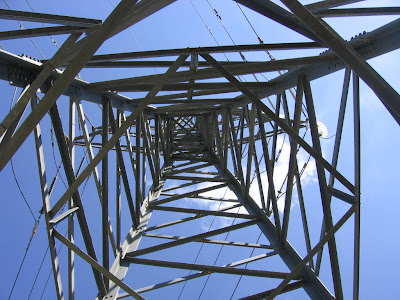 Hapax legomenon is Greek for "once said." It is a word that occurs only once in the written record of a language, in the works of an author, or in a single text.
It is a scholarly term much loved, used, and needed by Bible scholars. 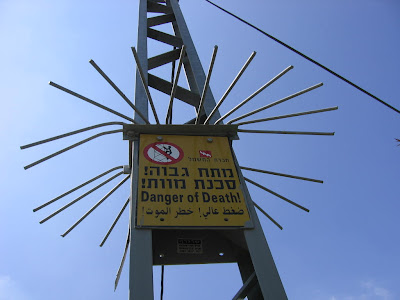 In Hebrew literature a hapax is called either a milla bodedah, i.e. an "isolated word," or ʾen lo ah, ʾen lo ḥaver, ʾen lo reʿa ba-Miqraʾ, i.e. it has nothing alike, no brother, no fellow, no comrade in the Bible.
Depending on how broad your definition is, the Hebrew Bible has between 289 to 1,300 hapaxes. 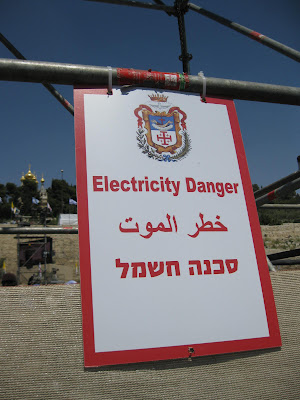 Since no one knew what chashmal meant, the translations are very varied.
The RSV says "As I looked, behold, a stormy wind came out of the north, and a great cloud, with brightness round about it, and fire flashing forth continually, and in the midst of the fire, as it were gleaming bronze."
NIV: "like glowing metal"
21st Century King James Version: "as the color of amber"
More versions here.
.
As you have guessed by now from the photos, modern Hebrew, when it needed to find a word for electricity, adopted Ezekiel's word chashmal!
.
And my favorite sign (well, except for this one) is ELECTRICITY DANGER, a translation by the Franciscans of sakana chashmal, posted at the scene of Pope Benedict's Mass in Jerusalem.
.
Posted by Dina at 7:34 PM