The keys to the city--take them already!

.
December 9 is the anniversary of a major event in Jerusalem's modern history, but I doubt if anyone will think of it. The only reason I know is because of my explorations this week.
I found a tall office building and from a top (10th) floor window was lucky to get this view to the west. The huge building with the long blue windows is the new Central Bus Station.
But what was that little circular park in back of it?? 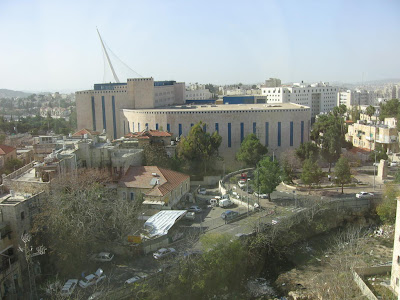 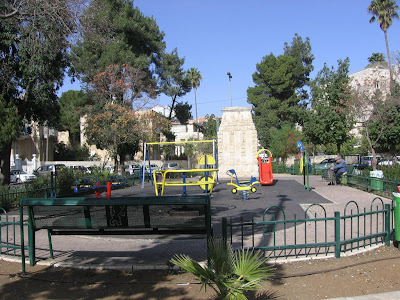 I went down and discovered this little playground, but no name.
But across the street was a tiny sign on an old wall that said Kikar Allenby, meaning Allenby Square. Aha! 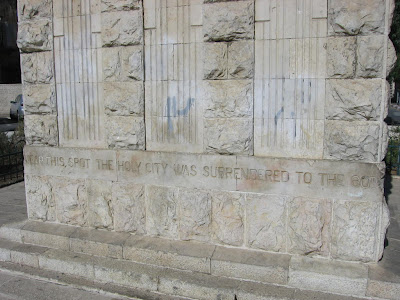 And an old monument! Its inscription reads:
"NEAR THIS SPOT THE HOLY CITY WAS SURRENDERED TO THE 60th LONDON DIVISION 9th DECEMBER 1917.   ERECTED BY THEIR COMRADES TO THOSE OFFICERS, N.C.O.'s AND MEN WHO FELL IN FIGHTING FOR JERUSALEM." 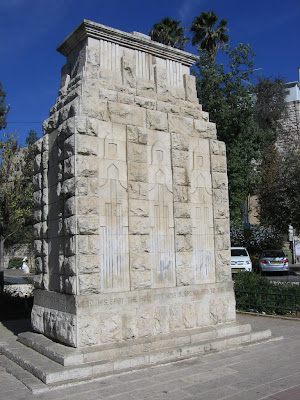 If you click to enlarge this photo and contemplate the figures etched in stone, you may see hooded Crusader knights with shield and sword!! Like these British soldiers they, too, conquered Jerusalem (in 1099).
But wait . . . I always heard that General Allenby accepted the Turks' surrender at the Citadel, just inside the Jaffa Gate, in the Old City. So, back home, I asked the Google god to help in my quest for answers.
Here, written by Aviva Bar-Am in her Jerusalem Post article "Authentic Romema," is (one version of) the amazing story:
.
"In the wee hours of December 9, 1917, two British army cooks from the 60th London Division left their Jerusalem base in search of fresh eggs and vegetables for their commander. Less than six weeks had passed since Commonwealth troops had breached the Turkish lines in Israel for the first time and conquered Beersheba; earlier that very morning the British had captured Jerusalem from the Turks, as well.
As the cooks walked through a deserted field on an exposed hill, they were accosted by a number of residents anxious to surrender the city. Among them were four policemen, several youths, the Jerusalem mayor Hussein Selim el-Husseini and a photographer from the American Colony.
Upon sighting British soldiers, the Jerusalemites lifted their arms. They held a white sheet that had been hastily torn off one of the beds at the American Colony’s hospital. Attached to a broom handle, the sheet was the Jerusalemites’ makeshift flag of truce. The mayor then handed the cook and his aide a tender of capitulation, explaining that the Turks had fled the city.
.
When the soldiers returned to base, they told their commander what had happened. He was so upset that the ’ceremony’ had taken place without him, that he ordered the mayor to return to the hill, and conducted a second surrender. However, that officer’s commander was furious that he hadn’t been present at either surrender, so he held a third ceremony on the same spot.
.
But General Sir Edmund Allenby, commander in chief of the British-Anzac Egyptian Expeditionary Force, was unimpressed by the three surrenders. On December 11, 1917, he entered the Old City of Jerusalem and conducted yet another capitulation ceremony. Unfortunately, the mayor was unable to attend — he is said to have contracted pneumonia after standing on the exposed hill for the three previous ceremonies and to have died soon afterward.
.
Ignoring the location and circumstances of the fourth and final surrender, soldiers of the 60th London Division decided to erect a three-meter-high monument near the original site in 1920."
.
For more photos and stories from around the world visit the friendly blogger-tour guides at our new That's My World Tuesday. Free tours! No tipping, except maybe to leave a comment. :)
.
UPDATE Sept. 2014:  A photograph of the surrender to the two British soldiers is now here!
UPDATE July 2019: More about the famous surrender photo --see here.
.
Posted by Dina at 8:26 PM