The First Station (of the train, not of the Cross)

.
While over at Hels' excellent "Art and Architecture, mainly" blog,  I learned a lot from her post "Saving an Ottoman-era railway station in Jerusalem."

It made me realize that I still need to show you my last photos of the work in progress, back in April.
Later in the spring the First Station was opened to the public as an entertainment and cultural venue, so now my pictures are history. 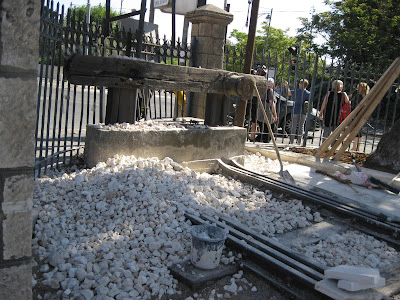 The end of the line!
Built in the 19th century, the rail line from Jaffa on the coast ended here in Jerusalem's German Colony. 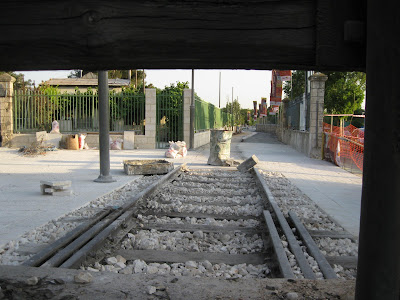 Looking in the other direction, you see the actual rails don't extend very far anymore.
The were covered over in nice wood and bricks and made into a  bike + walkers' path extending for miles. 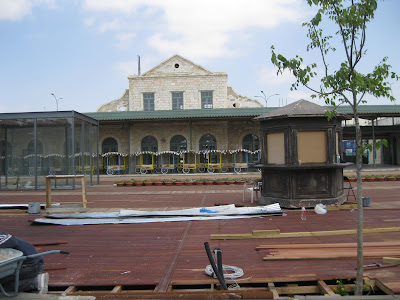 The venerable old train station was saved from the decay that had begun when this rail line to Jerusalem was closed in 1998.
(Today the Israel Rail again reaches Jerusalem, but ends at a new modern and ugly station.)

The day I passed by, the workers were building a big wooden deck for the expected visitors to the new venue.
Enlarge the photo to see the cute "luggage wagons" soon to be kiosks. 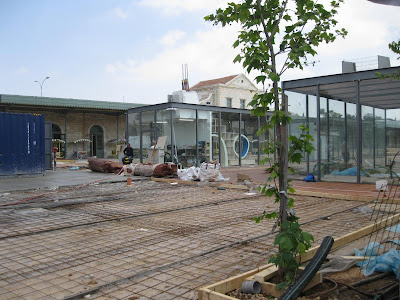 Rebar was laid before concrete was pored. 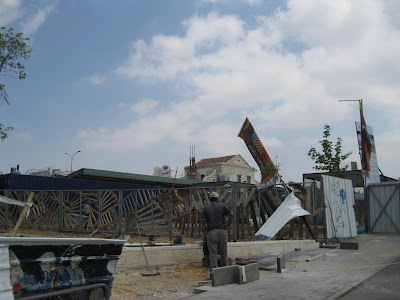 A fancy fence, a sign of things to come.
.
For background of the station and the railroad you can see my 2011 post "Shadows and decaying elegance."
And for a laugh, see the misspelled traffic sign that briefly hung at the end of the tracks until it was discovered by bloggers and newspapermen and became a laughing stock.