.
The walled Old City is to the east of the new city.
The Christian Quarter (about 4,000 people) in the upper left, Armenian Quarter (2,000) in lower left, Jewish Quarter (3,000) bottom center.
The Muslim Quarter (26,000) is all the rest, including the large rectangle of the Temple Mount. 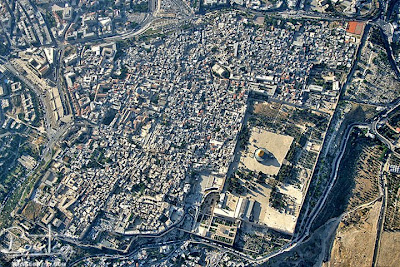 Aerial photo borrowed from the Internet. 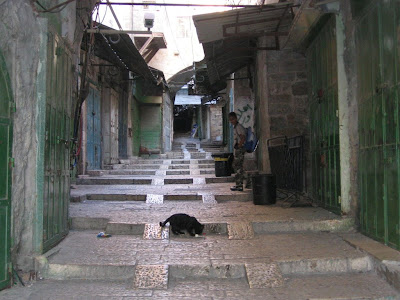 The bustling bazaar streets that we saw in yesterday's post are still asleep at 6:00 a.m.
I used to walk this street every morning to my dig at the Western Wall Plaza.
More cats than people just before sunrise.
The steps and the narrowness of the major shuk/market streets make them impassable for cars. 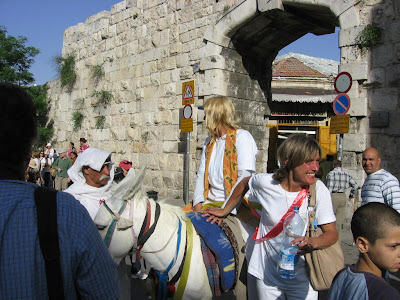 When I moved to Israel in 1968 donkeys still transported goods and sometimes people inside the Old City.
Now only this tourist donkey is left, and he works just outside the Old City.
Here he is seen at the New Gate. 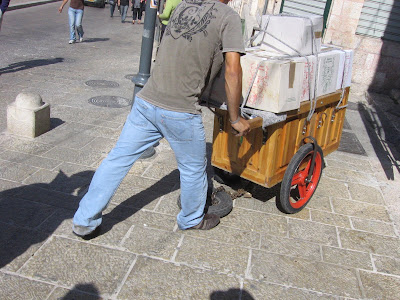 These carts are the "modern" way to go.
The only brakes are the tire chained to the cart. Just step on it to slow down.
The stone steps and ramps you saw in photo #2 are slippery when wet.
Whenever I hear a young driver coming down the crowded lane fast behind me, I stand aside, out of both respect and caution. 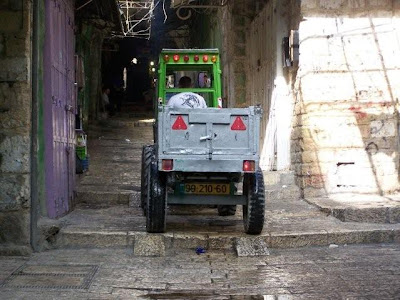 Garbage collection is done with little tractors and wagons.
.
Posted by Dina at 2:50 PM