.
Yet another batch of soofganiot frying in hot oil!
What would Chanuka be without them?
Today I caught sight of these jelly-donuts-in-progress as I walked down Jaffa Road, near the shuk/souk/market.
The smell of calories attracted my attention. 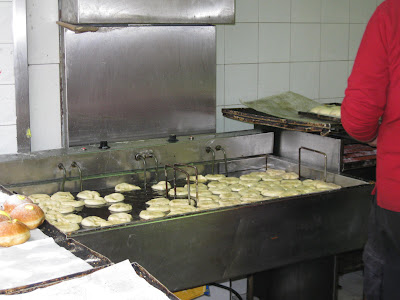 (Enlarge the photo to see the finished product on the left.)

Soofgania comes from the Hebrew word that means sponge, sfog, which comes from a similar Ancient Greek word.
And indeed this dough absorbs hot oil like a sponge, as do latkes (grated potato pancakes), that other traditional Chanuka treat.

.
The holiday was instituted not to celebrate the 165 BCE military victory of the Jews over the Seleucid Greeks (who defiled the Temple with pagan worship), but rather to celebrate the miracle of the olive OIL.
.
When the victorious Jews came to rededicate the Temple, they found only one small vial of still-pure oil (i.e. with the seal of the high priest intact). They needed to rekindle the menorah and keep it burning throughout the night every night; but to press, prepare, and consecrate a fresh supply of oil would have taken eight days.
.
The Talmud (in tractate Shabbat) says:
"What is Hanukah? The rabbis taught: . . . The vial contained sufficient oil for one day only, but a miracle occurred, and it fed the holy lamp eight days in succession. These eight days were the following year established as days of good cheer, on which psalms of praise and acknowledgment (of God's wonders) were to be recited."
.
So that's why our "days of good cheer" are now filled with oily tasty soofganiot.
.
Posted by Dina at 7:06 PM