Santa Claus at the Jaffa Gate!

.
Early this morning I went to the Old City on a blogging mission: to cover the annual Christmas tree distribution to the Christian residents of Jerusalem.
And boy, did I luck out!! 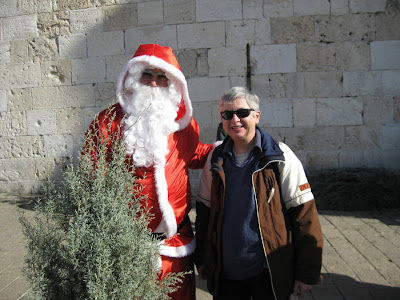 Santa Claus himself was at the Jaffa Gate, ho-ho-hoing! 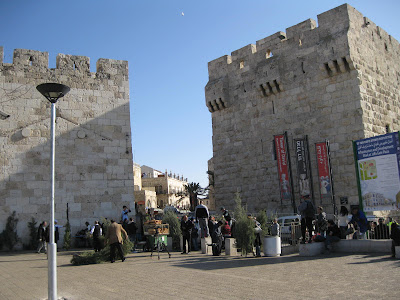 You remember from last Sunday's post. Jaffa Gate, built in 1538 by Sultan Suleiman the Magnificent. It is the main entrance through the Old City wall.

But to see the plaza outside the gate full of Christmas trees was a first for me!
Look, even a white dove of peace flying above! 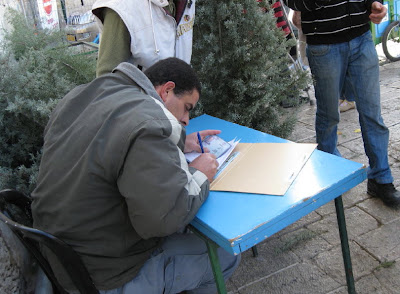 Apparently the Christians residing in Jerusalem (e.g. U.N. personnel, diplomatic corps, clergy, foreign correspondents, etc.) were supposed to show their ID card or passport to get a free tree.
A few did. 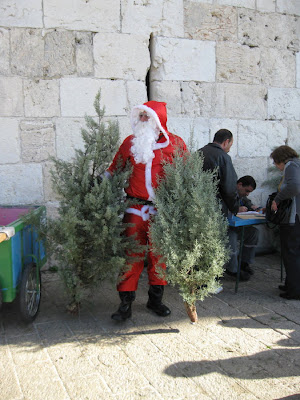 Santa passed out a few trees to those good folk. 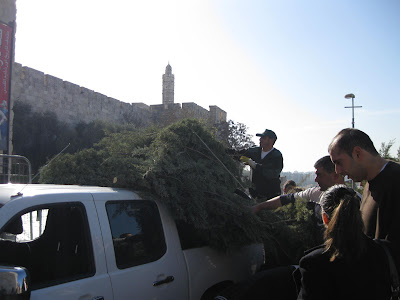 But mostly it looked like a free-for-all with people grabbing trees each time another pickup truck of the Jerusalem Municipality drove up.
One hundred trees were supposed to be distributed between 9:00 and noon, but by ten o'clock they ran out of trees.
City Hall footed the bill, paying 70 shekels per tree to the Keren Kayemet/Jewish National Fund, which provided the trees. 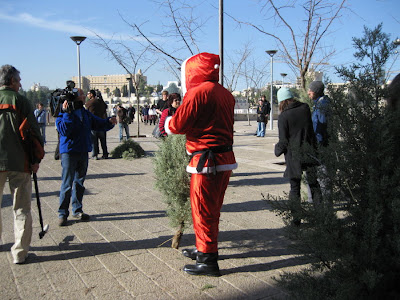 Santa did a lot of posing with trees and with people as the cameras rolled and clicked.
He spread Christmas cheer and wishes for peace in flawless English. 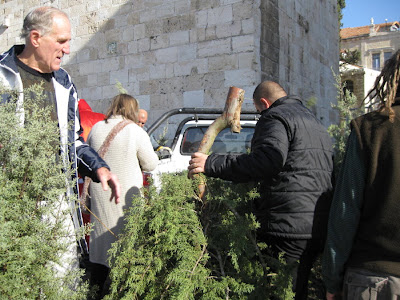 See the strange "trunk"?
That is because these are actually crowns from trees that needed thinning out at their top.
I read that some were Atlantic cypress, some pines.
More info at the KKL JNF website.
They all smelled so good. 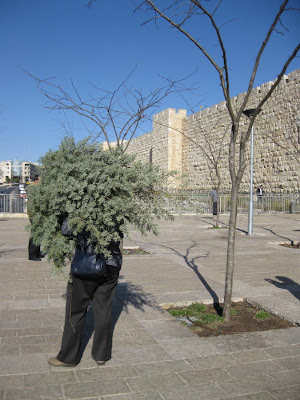 People took their trees home however they could.
This woman just shouldered her tree and started walking. 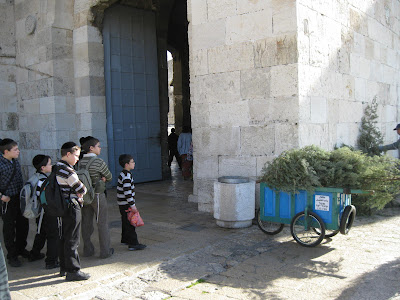 Some piled them on the 3-wheeled pushcarts that porters use to transport goods along the narrow lanes of the Old City.
.
For these very religious Jewish boys, this was the closest they ever were to anything related to goyishe Christmas. They seemed in shock that this was happening.
.
I think in response to ultra-Orthodox grumbling, the Jerusalem Municipality told the Jerusalem Post:
"Just like the municipality pays for hundreds of menoras to go up all over the city during Hanukka, and just like we assist with preparations for Ramadan, we also distribute Christmas trees. There are people of faith from the world's three major religions living in the city, and we respect them all and want them to enjoy their respective holidays." 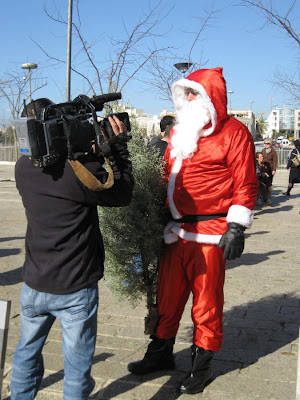 In the interviews Santa seemed exceptionally articulate and diplomatic.
I heard him speaking Arabic when he was not on camera.

He was a jolly good fellow.
Oh, and his name, Issa Anis Kassissieh.   Issa, is Arabic for Jesus.
.
Posted by Dina at 6:45 PM