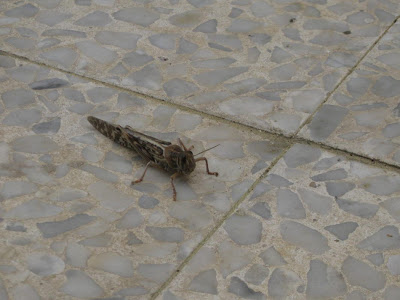 Oh no, a locust!
It landed on my patio today.
Must have been almost 2 inches long.
I sure hope it is not a harbinger of an approaching swarm.


Last month Egypt had a plague of millions of locusts, which made Israelis think of the ten plagues that the Bible says were needed to convince Pharaoh to let our people go.
But then the Egyptians of 2013 burned tires and the black smoke and the favorable winds drove some of the locusts across the border into Israel a few weeks ago.

Our Agriculture Ministry put the country on locust alert.
When swarms (some were 6 kilometers long!)  landed on field of crops in the south, they were sprayed by crop duster planes and trucks.

How strange to have locusts right before the Passover holiday.

Now we hear that some Jews, especially those from Yemen, like to bake this type of grasshopper until it becomes a crunchy delicacy.
There is some debate, but many rabbis rule that this locust is kosher, the only kosher insect.
If you have the stomach for it you can read "The locusts are coming! Yum!"