A tree to remember

.
Mystery from last Sunday's post is solved. A previously unknown to me reader kindly sent the answer in her comment.
So, why is this tree on the Mount Scopus campus of the Hebrew University tilted? 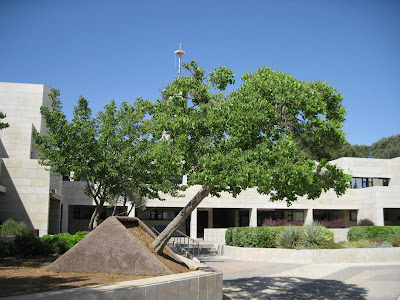 Because on July 31, 2002, a bomb inside the nearby student cafeteria killed nine (including five Americans) and injured more than 80.
It was at the height of the Second Intifada against Israel, which was especially severe in Jerusalem.
.
The terrorist act also injured the Rothberg International School program for a while. Enrollment plunged from 600 undergraduate overseas students each year to less than 100. Many schools in North America banned their students from coming to this "dangerous" place.

To quote the JewishJournal.com link which the reader sent,

"In front of the cafeteria grows an unusual-looking tree: its leaves are hearty and vibrant but its trunk is tilted and its roots jet out of the ground at various angles.
'We have planted a living tree [as a memorial for the bombing victims] which is symbolic,' Hebrew University President Menachem Magidor said. 'Our roots were shaken but, just like the tree, we keep growing and going forward.'

. . . Magidor admitted that the desire to maintain an open and pluralistic feeling on campus, for students of all races and religions, may have blinded administrators to the security risks.
'The first reaction was shock,' he admitted. 'We knew we were not immune, but maybe we thought naively that the campus should be immune.' "
.
Well, now it is 2009. When I came to the Mt. Scopus campus last week, it was a quick X-ray of my bag, and then I entered a beautiful and relaxed world of students--many Anglos speaking English or accented Hebrew, many Arab students, and even Jewish Israelis. All seemed happy to be students, happy to be alive and free.
.
Posted by Dina at 7:02 PM