This busy intersection is on King George Street in central Jerusalem.
But when Talitha Kumi was built in 1867 it was in the middle of nowhere.
It was one of the first buildings to be built outside the Old City's protective wall. 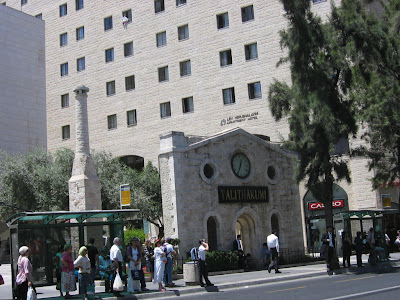 It was founded as a home for orphaned Arab girls, later developing into a girls’ boarding school. 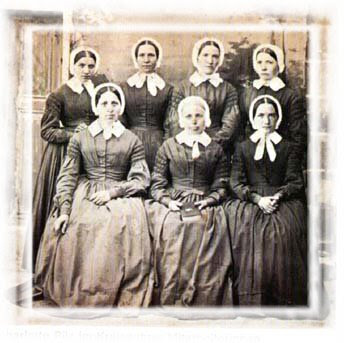 These are some of the Deaconess Sisters who cared for and taught the girls.


The photo is from the website of the modern, and now co-ed, Talitha Kumi School run by the Evangelical Lutherans.
In 1961 the School moved to Beit Jala, a Christian village outside Bethlehem, in the West Bank. 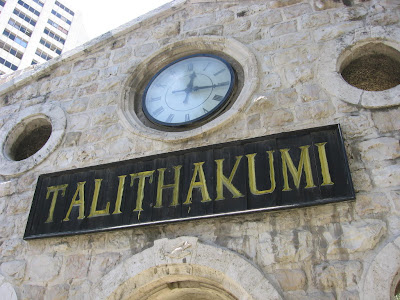 Enlarge this photo above to see the peace dove with olive branch, the symbol of the Deaconesses. 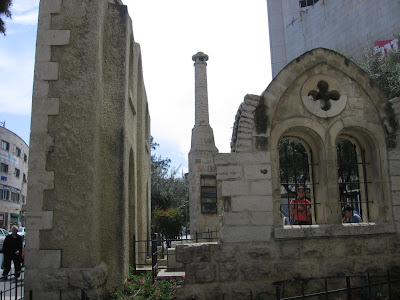 These windows, the chimney, and part of the facade were saved when Old Talitha Kumi was demolished in 1980.
The three elements were erected here, 50 meters from the original site.
That we may remember. 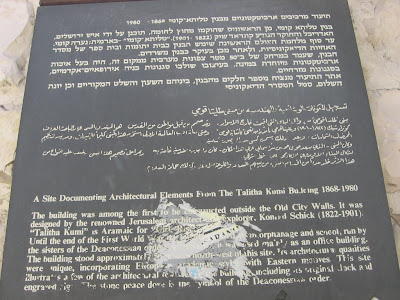 The plaque explains that German architect (and explorer) Conrad Schick (who designed so much of 19th century Jerusalem) incorporated European academic style with Eastern motifs for this unique building. 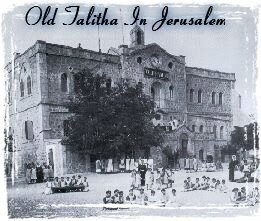 I was surprised to learn from this vintage photograph that the arch with the clock was actually on the upper level.
.
If you open your New Testament to Mark 5:41, no matter what language your Bible is in, you will probably see the Aramaic words talitha, kumi.
It means "Little girl, arise."
.
Dr. Georg Dürr, principal of the school, writes this in his welcome to the nice website:

The name of the institution has been linked with the story of the resurrection of that little girl from the dead, the Evangelist Mark writes: "And Jesus took the damsel by the hand and said to her "Talitha Kumi" which means "Little Girl I say unto thee arise."
The name itself has turned into a commitment for us. It's a word that calls for life. A word that fills someone's heart with courage and make him look at the future with hope and optimism. We prepare our students to face life with courage and self-confidence. . . .