.
Y is our current letter on ABC Wednesday.
Jerusalem has a Y name that works both in English and in Hebrew.
Our grand old YMCA is affectionately known in Hebrew as Yimca. 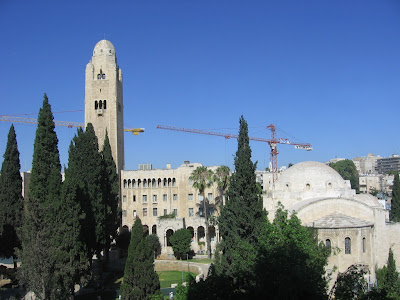 The building was dedicated in 1933.
Its three wings allude to the Young Men's Christian Association's credo of the unity of body, mind, and spirit.
.

The central part (with the tower) contains the administrative offices, a library, the Three Arches Hotel, kindergartens, and rooms for social and cultural activities. 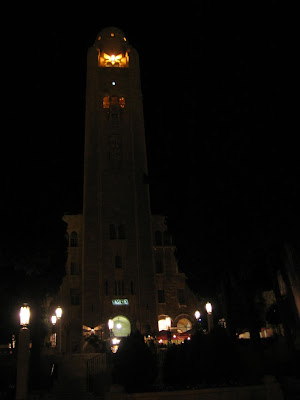 
"JIY’s unique programs . . . foster harmony and the building of spirit, mind and body.
With its elegant arches, domes and 152-foot observation tower overlooking Jerusalem’s Old City, JIY [Jerusalem International YMCA] is a designated city landmark.
JIY is acknowledged as a center of cultural, athletic, social and intellectual life in Jerusalem and is visited by more than 500,000 people annually.
In addition to offering amenities such as fitness, dining and hotel facilities, JIY’s auditorium often hosts the most socially and culturally significant events in the region. JIY’s presence serves as a foundation of optimism and offers a message of hope and reconciliation for all in the Holy Land." 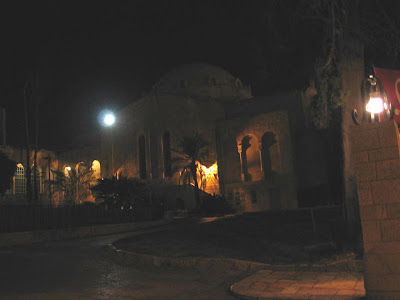 The north wing has the hall for concerts and public gatherings. 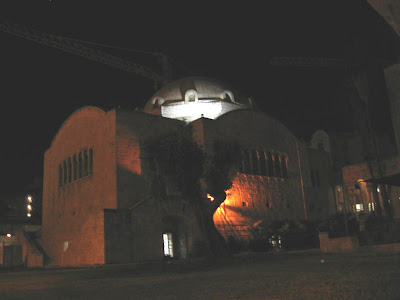 The southern wing is dedicated to physical development, with a pool, gym, squash courts, and outdoor playing fields.
.
A page about the building's fascinating history is here.
About the architecture and its symbolism, here.
.
Read about the integrated preschool where over 130 little Jewish, Christian, and Muslim kids learn and play together, in both Hebrew and Arabic.

"Maximizing dialogue among adherents of the three monotheistic religions is a goal of the local YMCA; the concept of a trinity of spirit, mind and body is the international organization’s motto.

This trinity is repeated in three rooms in the tower – an underground oratory, a second-floor Upper Room depicting the Last Supper and a space under the tower’s dome devoted to silent worship. These chambers represent three stages in man’s quest for God."
(from the website)
.
Someday I will just have to climb that tower.
Hope you enjoyed Jerusalem's own special Y.
.
Posted by Dina at 8:44 PM