Italy at the Jaffa Gate 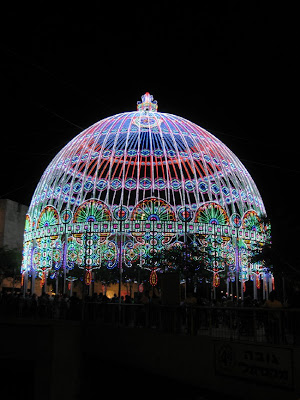 An estimated quarter of a million Israelis, Jerusalemites, Old City residents, and tourists flocked to the week-long Festival of Light, and this cupola just outside Jaffa Gate greeted them and elicited many oohs and ahhs!

Against the black night sky (for SkyWatch Friday) and next to the illuminated city wall, the dome truly was spectacular.

Enlarge the photos to see the hundreds of tiny lights. 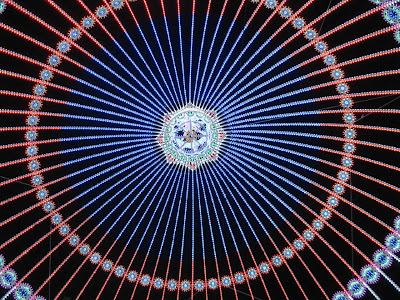 Especially when you looked upward from the inside.

At the Jaffa gate, a dome will rise which resembles a building from the Italian Renaissance, because of its size and shape.

Reaching 25 meters high and spreading over 20 meters wide, the dome in Jerusalem is a true spectacle and an impressive entrance for visitors to the city.

Luminarie De Cagna is an Italian family concern that was founded in 1930. Back then the firm illuminated buildings and squares on festive occasions with oil and carbide lamps. Soon they switched to electric lights and since 2006 they have been using LEDs only for new projects. The LEDs are chained into great curtains of light or mounted on a wooden structure. In this way, whole streets and even squares are fully lit. 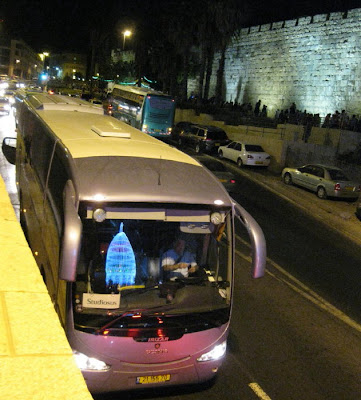 Even something for Weekend Reflections!
The tourist bus caught a reflection of the cupola just before it drove under the bridge on which the dome stood.
.
There is more about the Light Festival in my previous post and more will be coming.
.
Posted by Dina at 7:11 PM