Putting a face on death 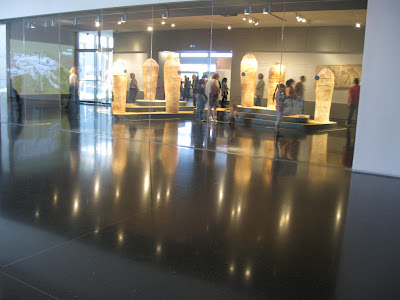 Welcome to the archaeology wing of the newly re-done Israel Museum.
Behind the glass wall and reflected in the floor are six anthropoid clay coffins standing at the entrance to greet you.
(Enjoy the big version by clicking on the photo and then once again on the photo that opens. )

South of Gaza city, at Deir el-Balah, some fifty pottery sarcophagi were unearthed from a large, ancient cemetery.
Located near the sea, the site had been protected from plunder by massive sand dunes.
The sarcophagi were fashioned by hand, using the coil technique, the method employed for creating large vessels.
They were then fired with their lids in an open fire.
The lids were later refired in kilns located nearby, which accounts for their darker color.
Similar cemeteries have been discovered near the Nile Delta.

Several features of the Gaza sarcophagi shows clear signs of Egyptian influence.
At times the lids bear depictions of mummy-like figures, indicating the face, wig, arms, and hands of the deceased.
Many of the faces have small beards, perhaps symbolizing the beard of Osiris, the Egyptian god of death, into whose realm the deceased was about to enter.
The bodies of the dead, usually more than one, were laid unembalmed in the coffin, along with funerary gifts such as pottery food bowls.
If the deceased was wealthy, elaborate jewelry and vessels made of stone and bronze were also added.

You can see some of the jewelry masterpieces here.

Be sure to check this link to see the amazing faces of the sarcophagi.

The partial excavation at Deir el-Balah in the Gaza Strip was done in 1972 by Trude Dotan.
This review of her recent book, Deir el-Balah: Uncovering an Egyptian Outpost in Canaan from the Time of the Exodus, has some interesting gossip about the dig.

To discover Hershel Shanks' idea about Joseph being buried in such a coffin, see this blog.
.

(A post for Taphophile Tragics and Weekend Reflections.)
.
Posted by Dina at 12:01 AM