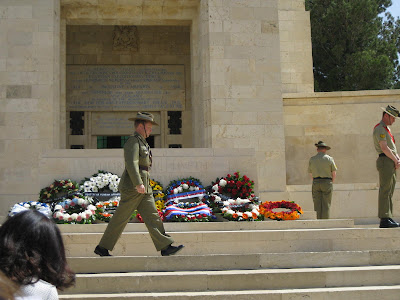 An Aussie or a Kiwi soldier stood with head bowed at each of the four corners of the catafalque.
.
This morning ANZAC Day was commemorated for the 96th time.
A time to honor the Australian and New Zealand Army Corps.
Here are some pictures from the Jerusalem War Cemetery on Mt. Scopus.
. 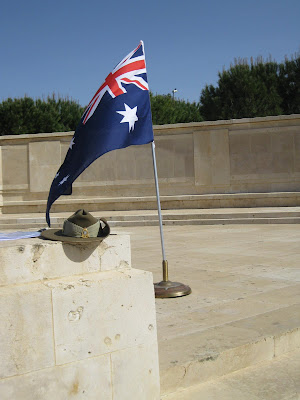 The Australian flag with its stars of the Southern Cross constellation.
. The cemetery, begun in 1917 by the Imperial [now Commonwealth] War Graves Commission, overlooks a Jerusalem much larger than it was during World War I.
. 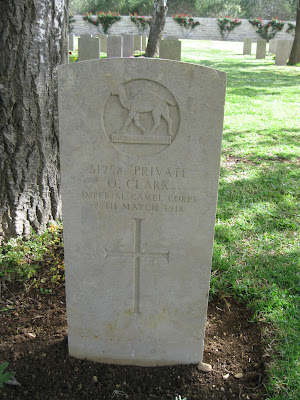 With today's modern technology for making war, it is hard to imagine these men going to battle as "light horse brigades" and, like on this tombstone, even the Imperial Camel Corps.
. 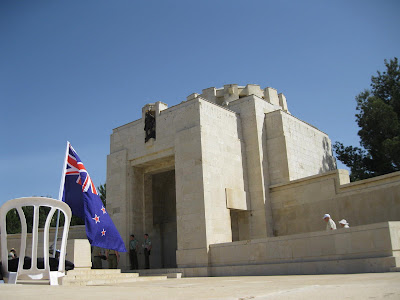 The flag of New Zealand in front of the memorial chapel.
. 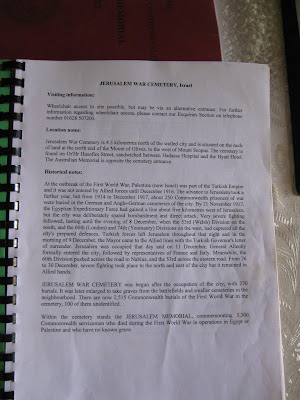 A book with information was in the chapel.
You can read this page and/or learn more at my previous posts about this beautiful cemetery.
. 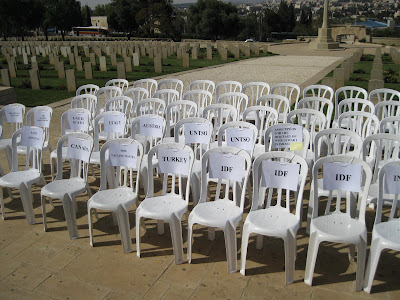 Some of today's invited guests.
I like the Embassy of Turkey next to the Israel Defense Force representatives.
. 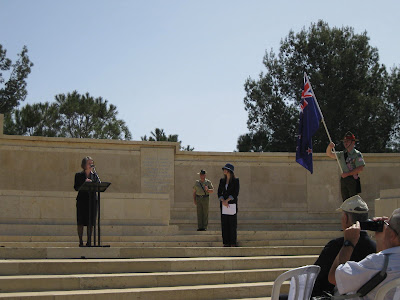 Following the prayer of remembrance by Pastor Evan Thomas and Psalm 23 recited by Rabbi Dr. Raymond Apple, the ANZAC Day Address was given by Ms. Andrea Faulkner, Ambassador of Australia.
.
Everything said was short and to the point, moving but not overly sentimental.
.
The poem "We shall keep the faith (1918)," by Moina Michael, "the poppy lady," was read, followed by the laying of wreaths.
. 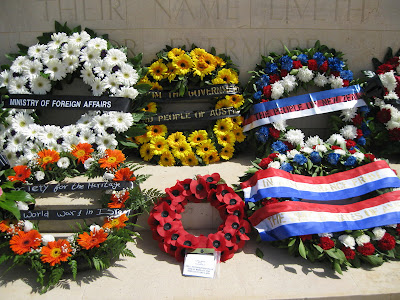 The United Kingdom of Great Britain and Northern Ireland brought the small wreath looking like poppies.
. 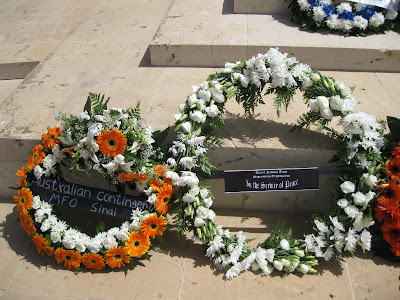 It is nice that UNTSO, the United Nations Truce Supervision Organisation, adds "In the service of Peace."
.
The always tear-producing "Ode to the Fallen" was read. All repeat: We will remember them.
.
A soldier from Fiji (more about him tomorrow) played The Last Post.
After we stood for one minute of silence, he played The Rouse.
And all said "Lest we forget."
.
The national anthems of Australia and New Zealand.
Benediction Prayer.
Catafalque Party dismounts.
. 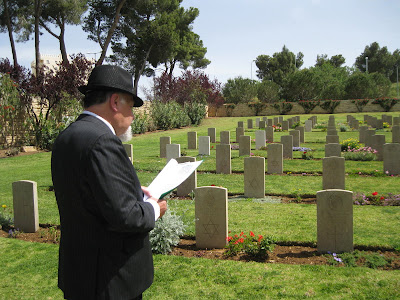 After the official ceremony, those who wished followed Rabbi Apple (Rabbi emeritus of Sydney's Great Synagogue) to the graves of 24 Commonwealth Jewish soldiers.
He read a Psalm and El Maleh Rachamim and we all said Kaddish.
. 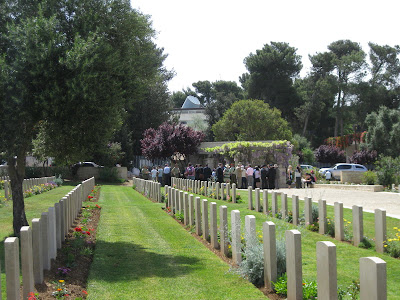 Everyone gathered for refreshments and conversation.
. In the Jerusalem War Cemetery are 2,515 Commonwealth burials of the First World War, 100 of them unidentified.
.
On the wall on the sides of the chapel are engraved the names of 3,366 Commonwealth servicemen who fought and died in Egypt and Palestine during the Great War and who have no known grave.
.
Who can comprehend such great numbers!
We remember them.
And those who continue to serve in the ANZAC spirit, in our region and around the world, we thank them too.
.
Posted by Dina at 4:09 PM