The wedding and a legend about Jerusalem

Shalom visitors from inSPIREd Sunday.  This is a vintage post for you in honor of yesterday's April 23rd  St. George's Day.  For more about St. George's Cathedral in Jerusalem see more posts.

Mazal tov to the newlyweds Prince William and Kate!
Yes, I watched the ceremony and loved it.
Nothing like a church wedding, especially if it is in Westminster Cathedral!
. 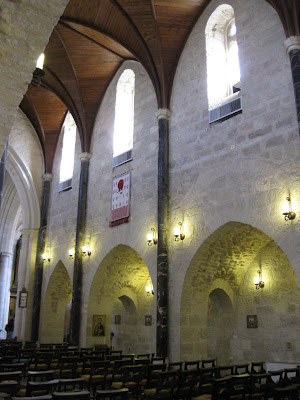 St. George's (Anglican) Cathedral may be the closest thing we have to an old English church in Jerusalem.
. 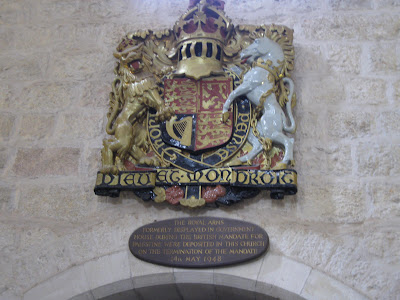 Enlarge the photo above to read how this British coat of arms ended up on the church wall. 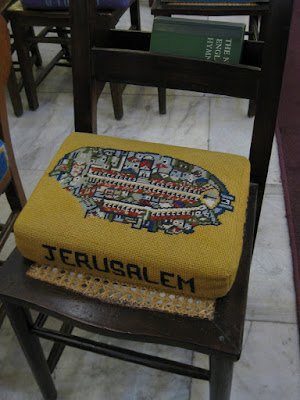 The ancient Madaba map of Jerusalem on a kneeling cushion. 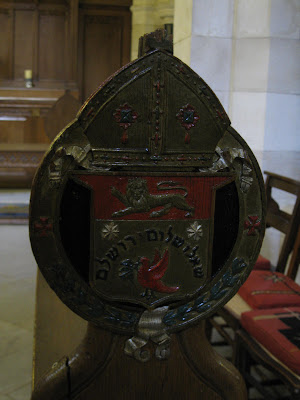 Under the lion at the end of a pew,  the Hebrew says "Pray for the peace of Jerusalem."
.
Today I saw the almost 2,000 guests in Westminster Cathedral really getting into the singing of "Jerusalem" with words by William Blake. Apparently it is the "unofficial anthem" of England.
.
Hear it played and see the words on YouTube.
.
I learned this from Wikipedia:

"The poem ['And did those feet in ancient time'] was inspired by the apocryphal story that a young Jesus, accompanied by his uncle Joseph of Arimathea, travelled to the area that is now England and visited Glastonbury.
The legend is linked to an idea in the Book of Revelation (3:12 and 21:2) describing a Second Coming, wherein Jesus establishes a new Jerusalem.
The Christian church in general, and the English Church in particular, used Jerusalem as a metaphor for Heaven, a place of universal love and peace.
.
In the most common interpretation of the poem, Blake implies that a visit of Jesus would briefly create heaven in England, in contrast to the 'dark Satanic Mills' of the Industrial Revolution. Analysts note that Blake asks four questions rather than stating a visit to be true.
According to this view, the poem says that there may, or may not, have been a divine visit, when there was briefly heaven in England.
But that was then; now, we are faced with the challenge of creating such a country once again."
. . .