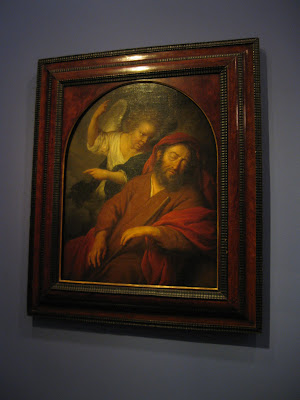 December 27-28-29 are the days on which the various Western and Eastern churches mark the Feast of the Holy Innocents.

Wikipedia explains the Flight into Egypt:

When the Magi came in search of Jesus, they go to Herod the Great in Jerusalem and ask where to find the newborn "King of the Jews". Herod becomes paranoid that the child will threaten his throne, and seeks to kill him. Herod initiates the Massacre of the Innocents in hopes of killing the child.

But an angel appears to Joseph and warns Joseph to take Jesus and his mother into Egypt.
Egypt was a logical place to find refuge, as it was outside the dominions of King Herod, but both Egypt and Palestine were part of the Roman Empire, making travel between them easy and relatively safe.

The passage from Matthew 2:

When [the Magi] had gone, an angel of the Lord appeared to Joseph in a dream. Get up, he said, take the child and his mother and escape to Egypt. Stay there until I tell you, for Herod is going to search for the child to kill him.
So he got up, took the child and his mother during the night and left for Egypt, where he stayed until the death of Herod.
And so was fulfilled what the Lord had said through the prophet: "Out of Egypt I called my son."

When Herod realised that he had been outwitted by the Magi, he was furious, and he gave orders to kill all the boys in Bethlehem and its vicinity who were two years old and under, in accordance with the time he had learned from the Magi.

Historically, this massacre may or may not have happened.
But we know that Herod never hesitated to kill,  even his own family.

Israel Museum is currently creating an outstanding exhibition called  Herod the Great: The King's Final Journey, due to open February 12.
See the short video about its construction.
.
Posted by Dina at 11:42 PM