Egg toss at Bibi and Shelly

.
A crowd was forming as I came out of  Shuk Mahane Yehuda market this afternoon. 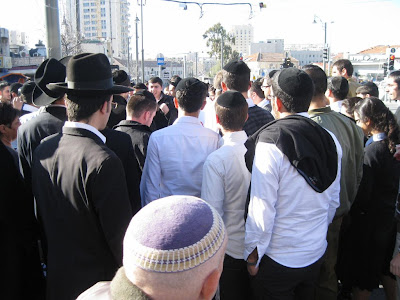 Most of the onlookers were religious yeshiva boys. 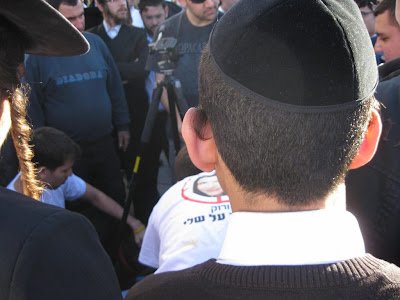 Some had long twirled side-curls and some had short tucked-behind-the-ear peot.
Nevertheless, I worked my way closer to the center to see what was going on. 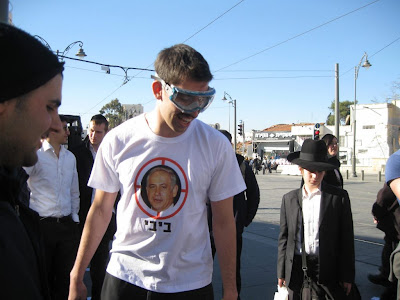 Two young seculars were wearing goggles and T shirts bearing pictures of two of the major candidates in tomorrow's national elections; the one above had Bibi (Netanyahu) in the crosshairs. 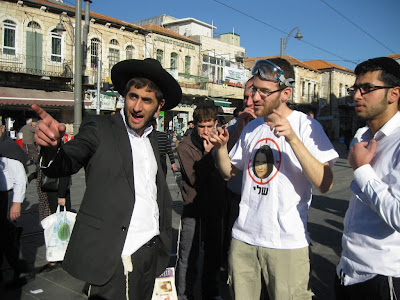 This one, wearing Shelly (Yacimovich, Labor), was trying hard to explain that the people were invited to throw an egg at the candidate they disliked the most.
They had trays with 60 eggs ready on the pavement. 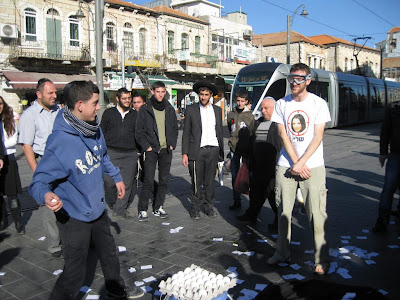 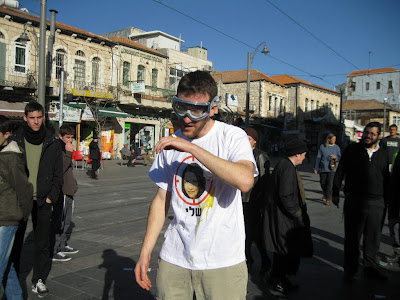 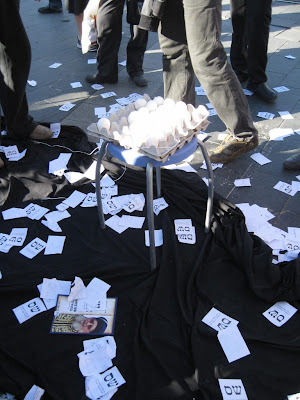 Strewn on a black cloth under the eggs were voting slips (yes, we still vote with a paper petek placed inside a paper envelope), and they were all of the Shas party (religious Sephardic Jews).
There was even a glossy picture of their head rabbi on the ground. Oi.

Then the Israeli crowd dynamic came into play.
A woman walking by yelled "Why do you make our sidewalk filthy with all those Shas papers?!  Disgusting!!"
Some young men in black shouted back "So you will have another reason to hate us."

Then an older man saw the egg-throwing in the crowded place (already spilling over onto the tram tracks) and said he was calling the police (as he took pictures with his cell phone).
Then the mood changed.
The previously-amused religious young men started chanting "Smolanim hachutsa, smolanim hachutsa" --meaning "Out with the left-wingers!"

The two in white packed up their eggs and got out of there.
.
There has been plenty of mud-slinging in this election campaign, but I have never heard of egg-slinging, till today.
.
For a nice piece about how the candidates always visit "Jerusalem's iconic fruit market" and how the sellers see them, read in The Times of Israel.
.
(Post links to Our World Tuesday.)
Posted by Dina at 10:58 PM