.
IMPORTANT UPDATE:  Read here  how botanist Dr Elaine Solowey is currently nurturing a fragile frankincense tree sapling in Kibbutz Ketura, after the plant has been absent from Israel for 1,500 years! 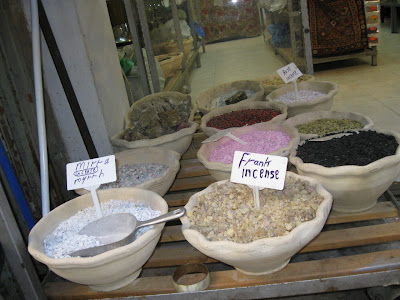 ". . . And there it was—the star they had seen in the east! It led them until it came and stopped above the place where the child was.
10 When they saw the star, they were overjoyed beyond measure.
11 Entering the house, they saw the child with Mary His mother, and falling to their knees, they worshiped Him.
Then they opened their treasures and presented Him with gifts: gold, frankincense, and myrrh."

These days frankincense and myrrh are readily available in spice shops in Jerusalem's Old City.
.
You're welcome to see my older posts:
T.S. Eliot's "Journey of the Magi"
and
Epiphany at Abu Ghosh monastery
.
UPDATE: I realized I didn't know how they were made.  Here is the answer from How Stuff Works:

"Derived from tree sap, or gum resin, both frankincense and myrrh are prized for their alluring fragrance.
Frankincense is a milky white resin extracted from species of the genus Boswellia, which thrive in arid, cool areas of the Arabian Peninsula, East Africa and India.
The finest and most aromatic of this species is Boswellia sacra, a small tree that grows in Somalia, Oman and Yemen. . . .
Myrrh is a reddish resin that comes from species of the genus Commiphora, which are native to northeast Africa and the adjacent areas of the Arabian Peninsula. Commiphora myrrha, a tree commonly used in the production of myrrh, can be found in the shallow, rocky soils of Ethiopia, Kenya, Oman, Saudi Arabia and Somalia. . . .

The processes for extracting the sap of Boswellia (for frankincense) and Commiphora (for myrrh) are essentially identical.
Harvesters make a longitudinal cut in the tree's trunk, which pierces gum resin reservoirs located within the bark.
The sap slowly oozes from the cut and drips down the tree, forming tear-shaped droplets that are left to harden on the side of the tree.
These beads are collected after two weeks."
.
The fascinating article continues here with more about the historical AND modern uses of frankincense and myrrh!
.
.
Posted by Dina at 10:55 PM