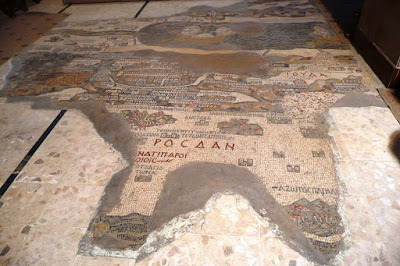 Craftsmen made it from more than two million colored tesserae sometime between the years 542 and 570.
.
The photo above shows the surviving parts of the mosaic, in situ in the church in the Arab village of Medeba in Jordan, where it was rediscovered in 1892.
Kay, my friend in Hawaii, author of the fine blog Musings, was actually there and sent me this picture!
. 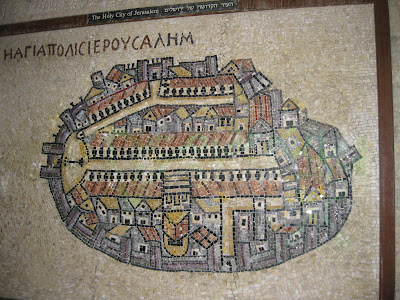 This photo shows our reproduction of the Jerusalem section of the map. It hangs near the Cardo in the Old City.

Yes, the same central Cardo that Israeli archaeologists in 1967 searched for and found (and later restored), based on this map! (It's the colonnaded road going across the map, starting at Damascus Gate on the left.)
.
This year archaeologists dug near the Jaffa Gate (at the bottom of the map) and were thrilled but not surprised to find the Decumanus (the Roman road which led up to the Cardo), shown with a sharp right angle here above.
.
And in 2006 my trowel was one of the lucky ones to first scrape through to the big beautiful paving stones of the Secondary Cardo (visible at the top of the map, its row of columns showing).
.

The Madaba mosaic is also a devotional map, so the most important church, the Holy Sepulchre, and also the Nea Church are distorted out of proportion to the rest of the city in order to show their conceptual importance for the Christians.

And naturally, the Byzantine Jerusalem depicted has the East on top. 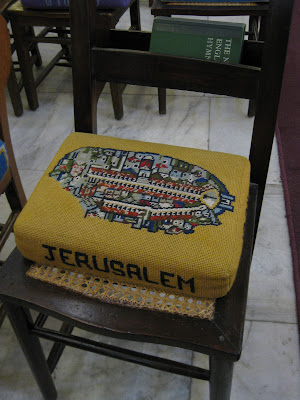 Being the oldest surviving original cartographic depiction of the Holy Land, the Madaba map is famous and beloved in our country and you find it on postcards, ceramics, and all kinds of souvenirs.

But a few days ago I had to laugh to find it on a kneeling cushion in St. George's Anglican Cathedral in east Jerusalem!
.
I could go on and on about the fascinating history and value of this map.

But I recommend you play around with your mouse on this great 3D map with overlays.
.
And you can see the Greek Orthodox church in Jordan where the mosaic resides at BiblePlaces.com.
The Franciscans have a virtual tour of the Madaba map, based on the book by Piccirillo.
.