New Abbot at the Dormition Abbey

.
It's not every day you get to see a Rite of Abbatial Blessing.
Yesterday the Dormition Abbey was packed with monastics, high-ranking clergy, ambassadors, and many guests for this very special Mass.

We were asked to "resist the temptation" of taking photos during the prayer.
The spoken and sung word was in Latin, German, and English. 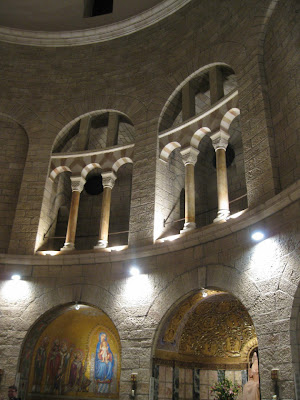 The Benedictine monks of the Dormition elected Father Gregory Collins OSB, a monk of Glenstal Abbey (in Ireland), to be their sixth Abbot.

The Glenstal website says
"While Benedictine monasteries nearly always elect one of their own monks as superior, the monks of Dormition have a tradition of calling monks from other abbeys to serve as their Abbot. Abbot Gregory is the first native speaker of English to be chosen.
He has been elected for a term of eight years." 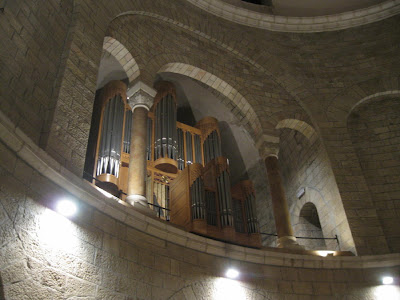 The service began in 3 pm sunlight and ended in evening semi-darkness.
As the organ played and the recession began . . . 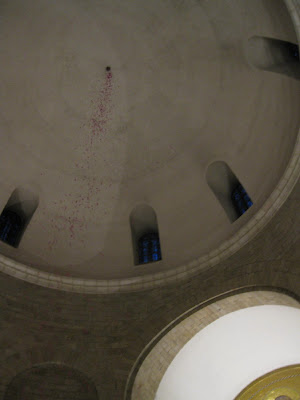 . . . suddenly a flower rain began from the center of the high dome!
Heavenly! 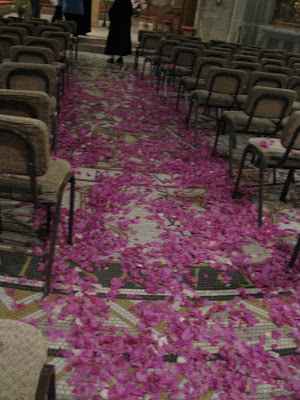 But it also reminded me of the saying "I never promised you a rose garden."
This new Irish abbot will have the special and heavy added responsibility of trying to keep and even add to the fragile peace of Jerusalem.

Indeed, the little icon picture souvenir of the occasion and the booklet for the Mass both had in a large font:

"pray for the peace of Jerusalem". 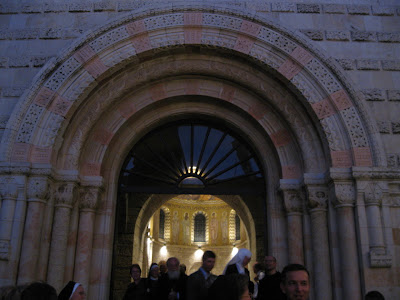 What a gorgeous doorway for Monday Doorways. 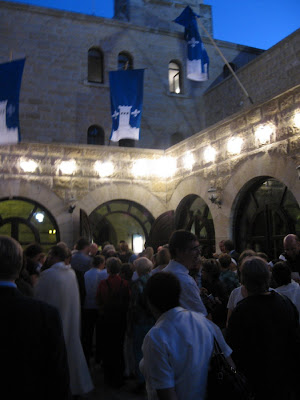 Everyone exchanged happy greetings in the courtyard and then headed for the generous buffet tables and bar inside the hall. 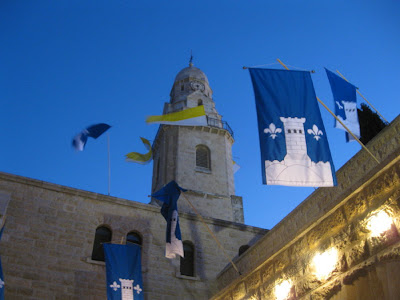 Special banners were twirling around in the evening breeze.

For more about the bell tower, monastery, and church (also known as Hagia Maria Sion) please see my earlier posts.
.
The Order of St. Benedict has existed 1500 years.
This part of yesterday's Abtsbenediktion was very moving:


Presentation of the Rule
Bishop Shomali [of the Latin Patriarchate]:

Take this Rule
which contains the tradition of holiness
received from our spiritual fathers.
As God gives you strength
and human frailty allows,
use it to guide and sustain your brothers
whom God has placed in your care.

Take this ring,
the sign of faith and commitment
so that sustained by firm courage,
you many keep this monastic family
in the bond of brotherly love.

Take this shepherd's staff
and show loving care for the brothers
whom the Lord has entrusted to you;
for he will demand an account
of your stewardship.