.
You know this old Jewish joke?

"How do we know Jesus was Jewish?
1. He lived at home until he was 30
2. He went into his father's business
3. His mother thought he was God."

Every Jewish Mother thinks her son is like unto God, but Mary took it seriously. 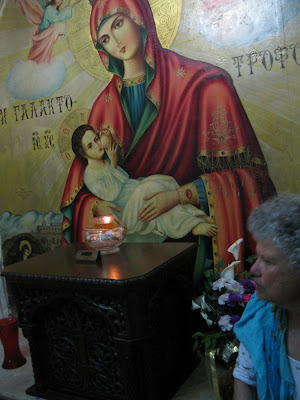 I was so surprised to go down to the old crypt of St. Gerasimus Monastery a few days ago and to see this image on the wall!

Since then I have learned that the Milk-giver icon first appeared in the 6th century and the Greek Orthodox call it Mlekopitatelnitsa, the Milk-giving Virgin Mary.
Although rare, it also entered Western religious art, but maybe 800 years later, where it is known as Maria Lactans. 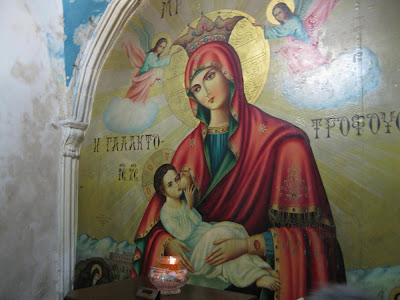 Mary wears the crown of the Queen of Heaven.

Although this monastery near Jericho is not on the route, a certain Christian tradition has it that Joseph, Mary, and Jesus overnighted here on their flight into Egypt and that in the crypt Jesus learned to take his first steps.
.
One of my favorite old paintings is this amazing scene by Caravaggio called "Rest on the Flight Into Egypt."
.
BTW, the carved wooden chest with the slot on top invites visitors to donate money or valuables to the monastery.
I am sure many of the Eastern Orthodox pilgrims are so moved that they contribute generously.
.
To those of you mothers in countries where today is Mother's Day (not in Israel), I wish you all the blessings of this Sunday.
.
Posted by Dina at 5:58 PM