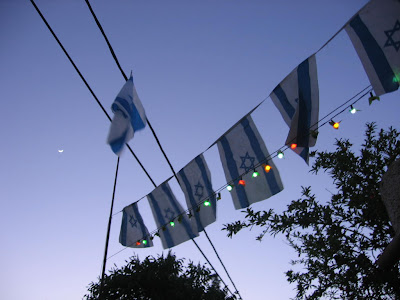 The abrupt transition from the somber Day of Remembrance to the joyous Independence Day  will happen very soon, at sundown.
The State of Israel's 65th birthday!
.
Join us for the festivities on Mount Herzl, broadcast live.
Our soldiers do fancy marching displays only once a year and this is your chance to hear the band and watch the young men and women.

The TV broadcast starts at 19.50 our time.
Israel is GMT +2 hours.   Time and Date can help you convert the time zones.
Go to http://iba.org.il/media/ and click on the flashing red words to open the TV coverage, and click for full screen.

First comes the ceremonial lighting of 12 torches, symbolizing the 12 tribes of Israel.
The theme this year is the national legacy and the preservation of national cultural assets for generations to come.

Quoting The Times of Israel,  the honorees will be


1) Colonel (Ret.) Dani Shapira, one of the first Israel Air Force pilots, who went on to spend 57 years flying planes as a service pilot and test pilot.
2) Historian and researcher Muki Tzur, for his work on investigating the settlement of Israel and the kibbutz movement.
3) David Blumberg, chairman of the board of the National Library.
4) Tamar Ross, researcher and presenter in the field of philosophy of Israel.
5)  Meir Buzaglo, mathematician and philosopher, who has worked to renew interest in Jewish poetry.
6) Rishon Lezion Mayor Dov Tzur, who will light a torch together with Iris Halperen, principal of the Haviv school, who has spent over 24 years in education.
7) Bilah Ben Eliyahu, presenter on contemporary Jewish literature.

8) Eliyan Elkrainu, the first Bedouin to preside over an academic institute, the Ahva Institute.
9)  Daphne Shimshon, the daughter of Indian immigrants. Her father was a community leader who was active in gaining full recognition of the community as being Jewish.
10) Rino Tzror, veteran journalist and radio host.
11) Ron Hedvati, a ranger for the Council for the Preservation for Heritage Sites and the founder of a museum in Kibbutz Ein Shemer.
12)  Agatha Farchick, a Ukrainian-born youth leader in the Hashomer Hatzair youth movement that this year marks its 100th anniversary, and Eliyana Elbaz, a youth leader in the Revisionist Youth movement that is marking its 90th year. A year and a half ago Elbaz’s father, who was active in the security forces and the police, was killed on his way to a mission. They will light a torch dedicated to the country’s youth.