Bringing heaven down to earth

.
On Monday the Israel Museum will open its doors (ALL the doors, not just a few like now) to the public after three years and one hundred million dollars worth of improvements to the 20-acre campus. 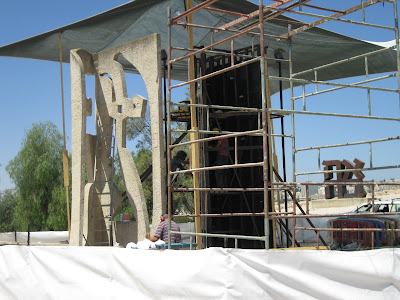 I was there just a few weeks ago and you still saw construction everywhere.
Hope they finish on time.
.
I don't know WHAT the workmen were doing to or adding to Picasso's "Profiles," which has been in the Billy Rose Art Garden since 1967.

Behind the Picasso you can see Robert Indiana's "Ahava," our Hebrew counterpart to his famous "LOVE." (More about it at my Valentine's Day post.) 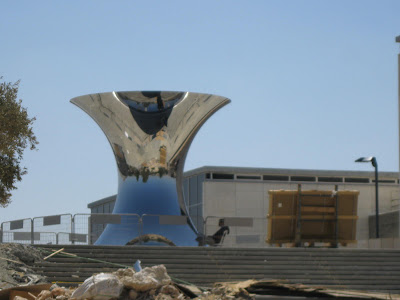 Look, something new!
The guard would not let me get any closer.
The sky--on the bottom!
Bringing heaven down to earth for SkyWatch Friday and Weekend Reflections!
.
And the guard leaning back on his chair, legs crossed, just sitting and . . . well . . . guarding.
.
The 5-meter-tall polished steel hourglass was commissioned from the London-based Indian sculptor Anish Kapoor (who as a teenager came to live in Israel a while and whose mother was Jewish, BTW).
He also made what Chicagoans like to call The Bean.
.
"Turning the World Upside Down, Jerusalem” reflects and inverts the Jerusalem sky and the Jerusalem landscape.
This is likely a play on the duality of the heavenly Jerusalem and the earthly Jerusalem.
In Hebrew we say Yerushalaim shel ma'alah, Yerushalaim shel matah, literally--Jerusalem of above and Jerusalem of below.
This new sculpture really turns our world on its head!
.
The New York Times explains how the Israel Museum is changing the way things will be shown to us. It is a whole new approach.
.
Posted by Dina at 6:16 PM