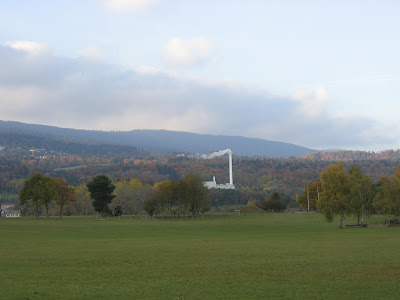 When I lived in Switzerland as a volunteer, this was the view from my window.
It is nothing more sinister than an incinerator that burns people's garbage in order to heat their water.
But there at the foot of the Jura Mountains, I discovered that my sense of the Jewish collective memory is strong and unavoidable.
I could never see the smoke and the chimney without being reminded of Nobel Prize winner Nelly Sach's poem "O the Chimneys."
Here are its opening lines:
.
O die Schornsteine
Auf den sinnreich erdachten Wohnungen des Todes,
Als Israels Leib zog aufgelöst in Rauch
Durch die Luft –
.Oh those smokestacks
Above the abodes of death, so ingeniously devised,
When Israel’s body, dissolved into smoke, was drifting
Through the air--

(translated by Reinhold Grimm)
.
The entire poem, in German and English, appears in the book German 20th Century Poetry.
.
Posted by Dina at 10:10 AM