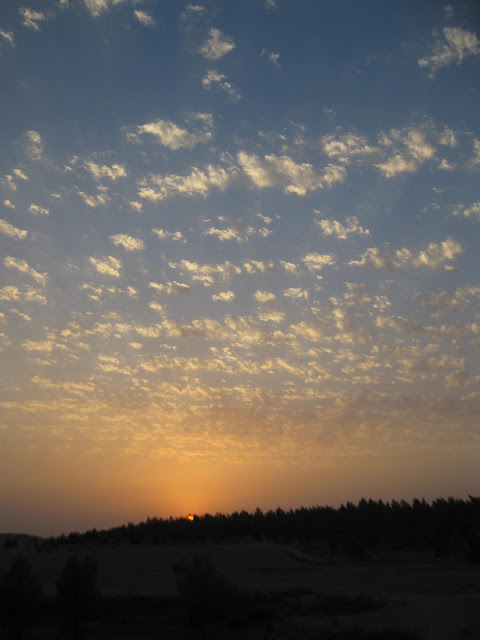 Not just here in the Negev desert, but all over Israel, July has been crazy hot.
One heat wave after another with no respite.
Temps in the high 30s (near 100 degrees F) in the shade (if you can find any shade).
Even our nights are too warm, which is not normal. 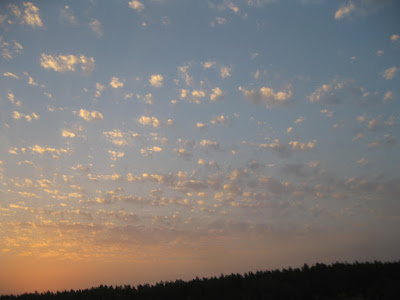 During my sunset walk I was treated to these strange clouds and, mercifully, the breeze began to blow.
Our summer skies do not often have any clouds.
And the long hot rainless summer can last for eight months.

When is a deck a boardwalk? 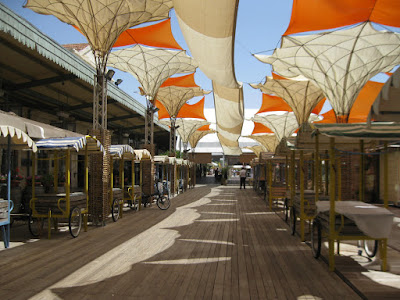 Can this long wooden walkway qualify as a "boardwalk"?
Hope so, because I need a B word for today's ABC Wednesday.
This was my first time to see Jerusalem's cultural and entertainment venue, the First Station.
I was last there in 2013 when the old heritage site train station was being re-done, so my construction photos are now history.
Just look at all those carts!
I walked through at 2:30, returning from the nearby International Book Fair, and nothing much was open yet, except the restaurants. 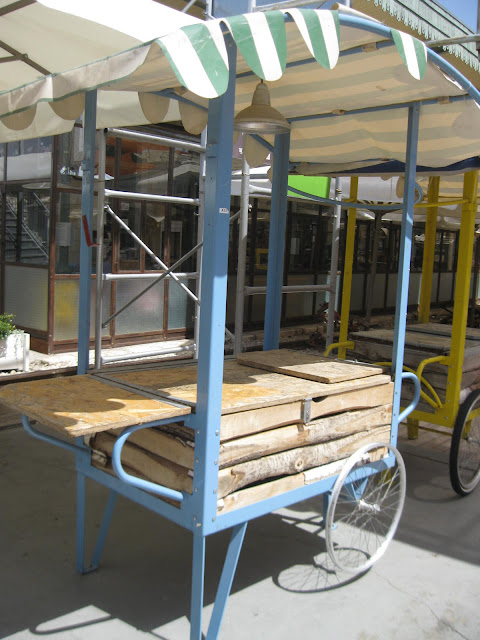 The rough-hewn wood of the selling carts is meant to evoke the memory of old-time luggage carts for the train passengers back in the 19th century.
The journey up to Jerusalem with the coal-burning locomotives is one I would love to have made back then, when this was still part of the Ottoman Empire.
.
Posted by Dina at 11:16 PM 12 comments: 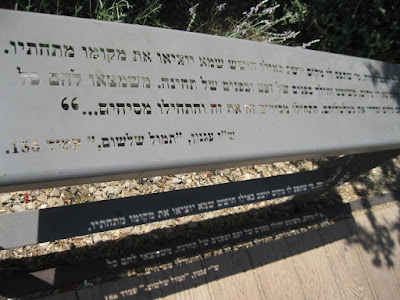 For the brand new version of the long-running meme ABC Wednesday that begins today, my A is for Agnon.
Shai Agnon, 1888-1970, was the only Israeli to win the Nobel Prize for Literature.

Alongside the walkway of the long Train Track Park in Jerusalem I was delighted to find this clever waist-high sign.
You can read (if you know Hebrew) either the cut out letters in the metal or the shadow of the words on the ground.
The quotation is from Agnon's famous masterpiece Tmol Shilshom, published in 1945.
Just a few years ago the book was translated into English as Only Yesterday.
You can sample some pages of the peculiar style here in Google Books.
.
UPDATE:  More about where this is located:
https://jerusalemhillsdailyphoto.blogspot.co.il/2012/12/park-hamesila-railway-park.html
and
http://worldlandscapearchitect.com/jerusalem-railway-park-tichnun-nof-landscape-architects/ 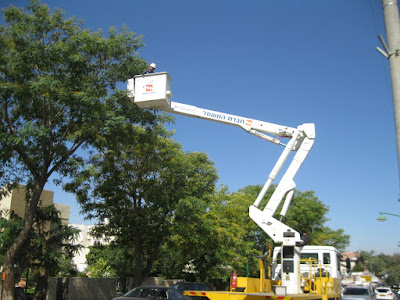 The Electric Corporation had to send us this special crane, and we waited several hours without electricity as it drove over from Ashdod, the port city of the Mediterranean coast. 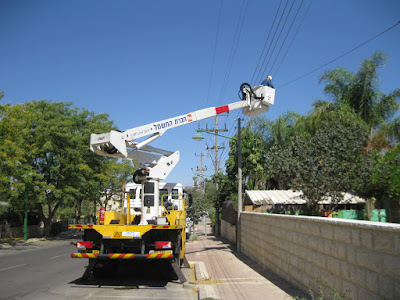 Then they had to adjust the feet of the truck, to make it level and solid. 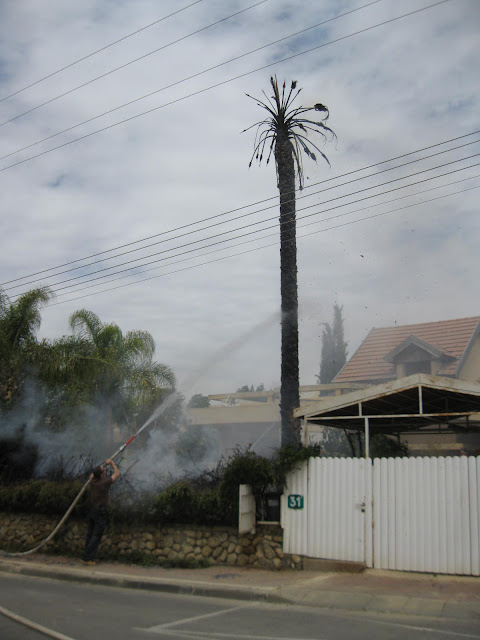 Remember this post about the burning palm tree from last March?
And this post on how the black dead tree was cut down?
So the fire was the culprit!  Three months later the apparently frayed cable tore and ended up on the sidewalk. 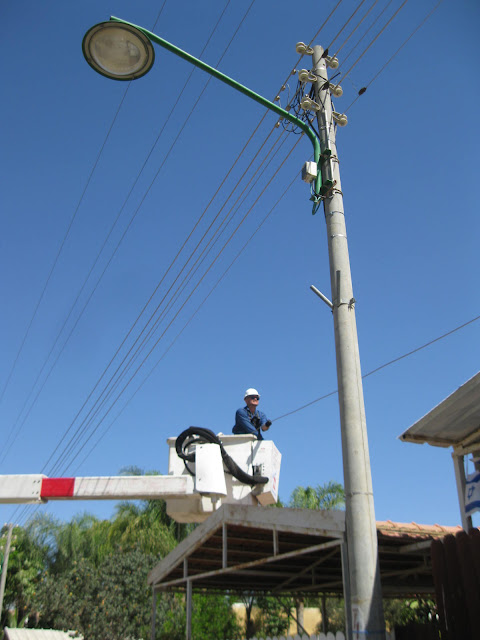 I know the technicians turn off the electric current for blocks around, but still, I always worry that the brave man on top might get zapped, God forbid! 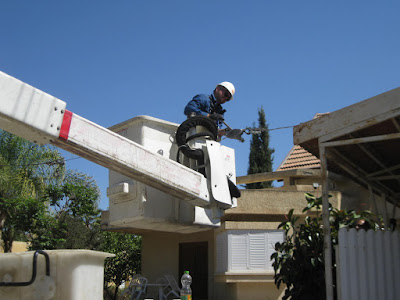 Here he tried to "splice" the two ends of the cable. 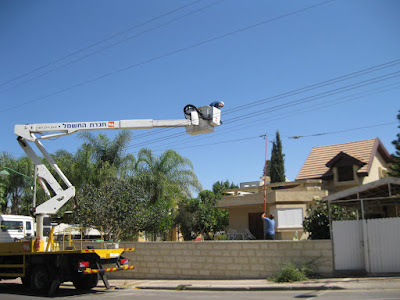 But his helper on the ground later had to lift the cable up to him on a stick. 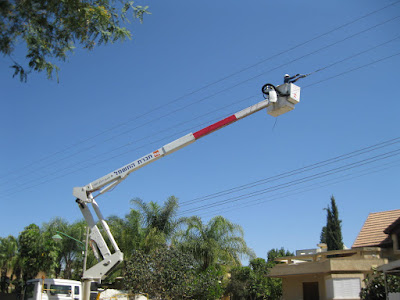 Oi, look how high he is, working hard to take up the slack and make it taut. 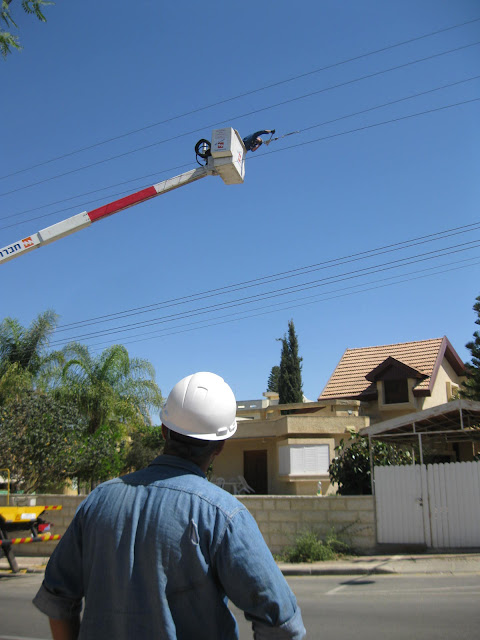 Leaning so far out of that cherry picker bucket.
We all watched in awe.

You can enlarge these pictures and see how the man is smiling through it all, as if to calm me, the Worrying Jewish Mother.
Thanks electric company. You guys are always here when we need you.
Stay safe and may you never ever get zapped.
.
(Linking to ABC Wednesday Z-day.)
.