Red roses in the green vineyards 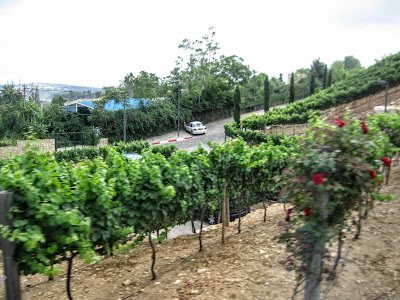 Roses planted in a vineyard??
If you are from rural Italy or France or California you probably know about this tradition.
But it was news to me when our tour guide pointed it out on June 12, just as the scene was quickly  disappearing from the bus window.
We were traveling through the Jerusalem Hills, west of Jerusalem.

He explained the roses as an early warning system.
Roses are more susceptible to the same type of fungal disease (e.g. powdery mildew and downy mildew) than the grapevine.
So if there are signs of trouble on the roses the farmer knows that action needs to be taken soon or the grapevines will be infected next.


Another reason I have heard is that in addition to being a ‘canary’ when the vines were worked with draft horses or oxen,  roses encouraged them to turn properly at the end of the rows because of their thorns, ensuring that the working animals weren’t tempted to cut a corner and damage the last vine.

Or this from Australia:

". . . many a vineyard manager would smile at this quaint romantic notion. Their job is more sophisticated than watching the roses bloom. In these days of modern technology roses are planted at the rows end for purely cosmetic reasons, but don't let that spoil another great story...
Some time ago in the Hunter Valley in New South Wales I quizzed one of the “old timers” in the area about the same issue. His response left me wondering whether or not he was “having a lend of me”.In the early days of grape growing, before any mechanisation, the vineyard work was completed using horses and horse pulled equipment. The best source of strong “draught horses” were the local coalmines where any pulling work involved horses.Sadly the distance underground was so far that the horses used were stabled in areas deep underground and, while they were very well cared for, their eyesight eventually became a casualty of the environment. The period horses were kept underground was mercifully short but permanent damage to their vision occurred. As the horses were “traded out” the local farmers and grape growers sought to utilise their great strength and stamina, particularly working with ploughs in vineyards where the rows were quite narrow.
Now the reason for the roses at the ends of the rows, as explained by this particular veteran, was to let the ‘blind’ horses know when they reached the end and it was time to turn. Roses in the Hunter Valley constantly bloom almost all year. I was never able to convince myself either way with his story; Australians can be very straight-faced when “spinning a yarn”. I will leave it up to you to decide."

UPDATE: See more in the Comments section  about the "pit ponies," the horses, mules, and ponies which worked in the dark coal mines of many countries for more than two centuries.
Posted by Dina at 6:35 PM 6 comments:

Down on the farm 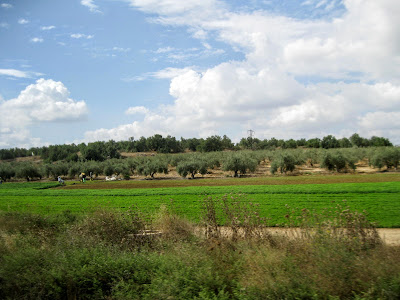 Last week's farm pictures from the middle of Israel.
They are snapped through the window of a bus, so it's better if you click a few times and open them to the large version.
You can see the sharp line dividing dark soil from green plants.
According to the hats, I reckon those are workers from Thailand harvesting whatever crop that is. 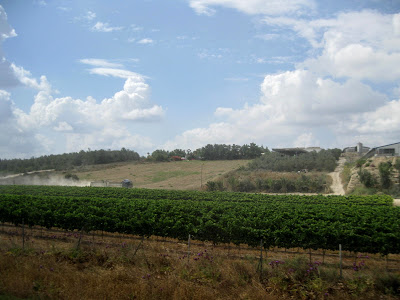 And here a truck with trailer goes along the farm road leaving a trail of dust.
Israel is in her fifth year of drought.
Most of our water now comes from desalination.
.
UPDATE: I just learned that today is World Day to Combat Desertification and Drought!
.
Posted by Dina at 11:00 PM 3 comments:

Iftar (my first!) at Wadi Attir in the wide desert 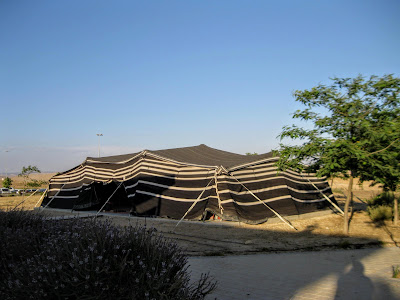 I got to participate in a lovely iftar this week, my first!
No, it wasn't in this big Bedouin hospitality tent, but it WAS in the courtyard of the new buildings next to it. 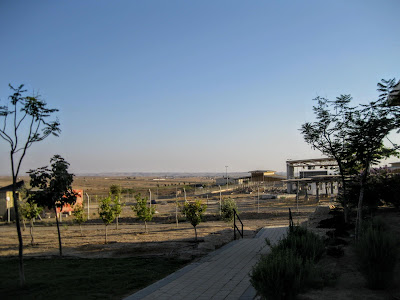 It was at Project Wadi Attir, a new and growing Bedouin + Jewish sustainability initiative in the Negev desert.
If you enlarge this photo all the way, you can see the modern and clean sheep and goat shed.
One of their ways to have income is to make and sell cheese.
Traditional Bedouin medicinal herbs and cosmetics are another. 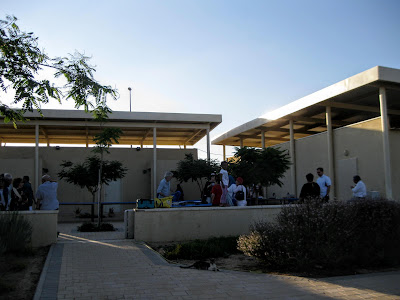 Here is the courtyard where we assembled and later, at sundown, ate. 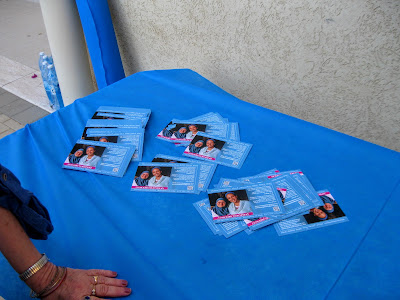 The iftar was in collaboration with Women Wage Peace, a multi-faith non-political movement formed by women in the aftermath of the big 2014 conflict with Gaza.
They arranged a panel discussion by a Muslim of Wadi Attir, a Polish Catholic priest from Beer Sheva, and a woman rabbi, who presented the different attitudes and approaches to religious fasting. 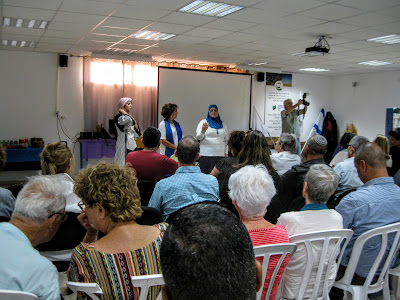 On the right: "Ghadir Hani, formerly our Executive Secretary, has begun working with Ali in the Field Crops department, managing outreach and sales, and helping with special programs. In addition to farmer's markets, Ghadir has also been introducing the products to new markets through word-of-mouth marketing events in people's homes in nearby neighborhoods like Omer, and has been a fixture at special local events..."  quoted from the April newsletter.

The  man wearing a kipa is my town Meitar's mayor; he also spoke, as did the mayor of our neighboring Bedouin town, Hura. 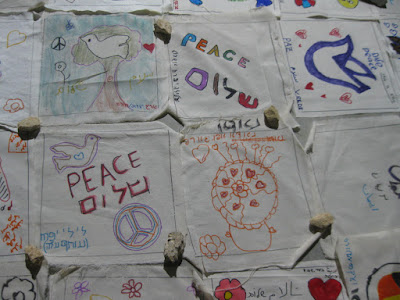 While the adults heard the talks, the Bedouin kids and their young Jewish guests made squares for a peace quilt out in the tent. 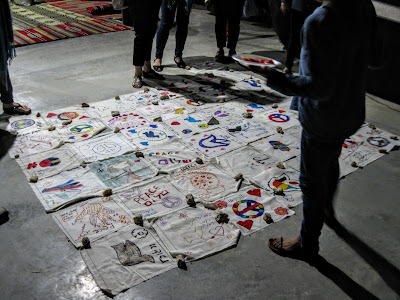 Unity Day at the Women Wage Peace Mothers’ Tent outside the Knesset
=================
On June 6th, Unity Day, we will spread out 150 quilts which were sewn from thousands of Pieces for Peace which we received from all over the world; we will then create a human chain of unity, and will express our common longing for peace; later Yael Decklebaum will join us at the tent and will sing her songs and talk about her journeys to peace; we will sing the Prayer of the Mothers with her.
1-4 PM Presentation of the Peace Quilts in the Rose Garden
4 PM A human chain along the street leading to the Knesset 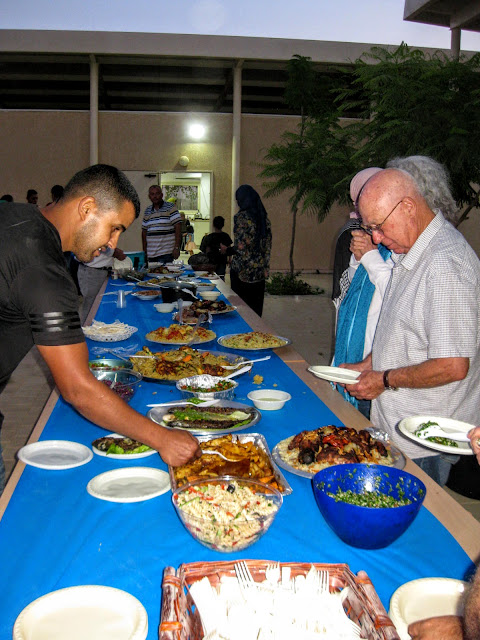 After all was said and done, the sun set and we hastened outside to the waiting tables full of good food (some prepared by the hosts and some brought by us guests).
The Muslims dug in without hesitation.
They had been fasting from food AND water from before 4:00 a.m. until 7:47 p.m.!
I can't imagine having that kind of self-discipline and devotion for the entire month of Ramadan, which often falls during our very hot summer.
.
Here is a nice explanation from "What You Should Know Before Attending Your First Iftar."


The fast itself is considered a purification of sins and a time to cleanse mind, body, and soul. Feeding a fasting person is believed to come with great reward from God and therefore many individuals, organizations, mosques, and community centers will offer an Iftar gathering in which the breaking of the fast is celebrated. It's usually not a ceremonial affair, although at many community gatherings this is often seen as an opportunity to educate and create an inter-faith gathering with delicious food, friends, and conversation.

Ramadan kareem!
(This blessing/greeting means "May you have a generous Ramadan," i.e. be generous in your giving to others.)
.
(Linking to inSPIRED Sunday.)
.
Posted by Dina at 4:07 PM 7 comments:

Back in Jerusalem for a day 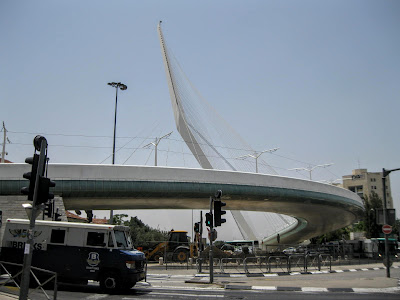 Yesterday I traveled northward an hour and a quarter by bus.
Getting off the bus, I stood on the corner for a few minutes marveling at how different Jerusalem is compared to the Negev.
There was Calatrava's graceful Bridge of  Strings which I watched being built since the mid-2000s.
Never mind that a Brink's armored truck photo-bombed the picture.  :) 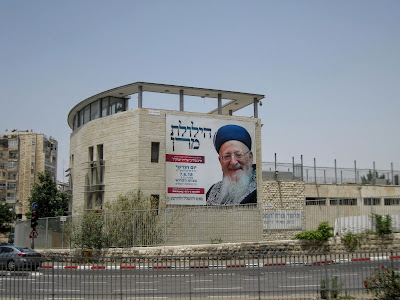 I turned to my right and this huge banner gave me a jolt; like, "Dina, we're not in Beer Sheva anymore!"
In not-very-religious Beer Sheva you see many different groupings (Ethiopian Jews, Russian immigrants, Bedouin, etc.), but ultra-orthodox Jews are few and far between.
In the photo is Rabbi Mordechai Eliyahu who was the Sephardic Chief Rabbi of Israel 1983-93 and died on June 7, 2010.
The banner calls people to attend a "hilulat Maran," a celebration of his life on the anniversary of his death at his tomb in Jerusalem.
To learn about the Aramaic honorific title "maran" for highly respected rabbis, see Wiki.