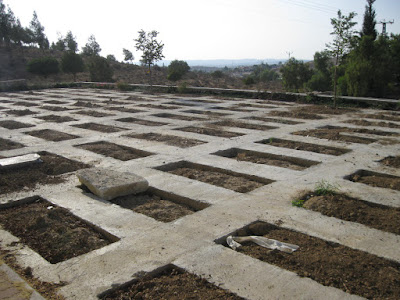 New plots are ready at my town's cemetery.
Which brings to mind the old Yiddish proverb,

As long as a man lives, the entire world is too small for him.  After death the grave is big enough. 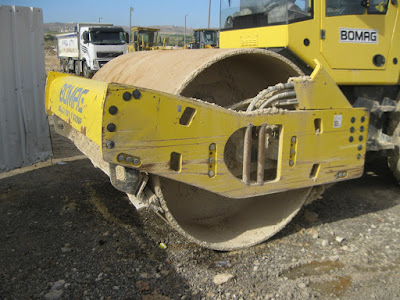 If I had to operate any of this heavy machinery in the hot dusty desert, by the end of the day I'd feel as if I had been under the steamroller. 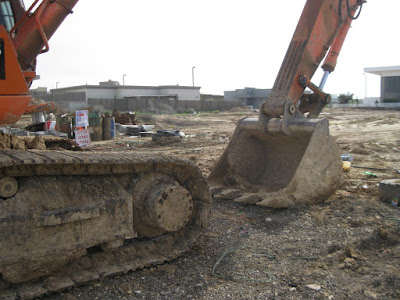 I don't know how the operators, who are usually Bedouin, work all day with no food or drink now during the month of Ramadan. 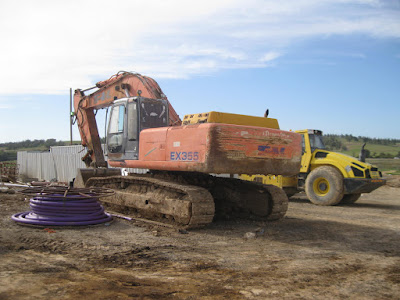 But the new neighborhood in our town has to get built. 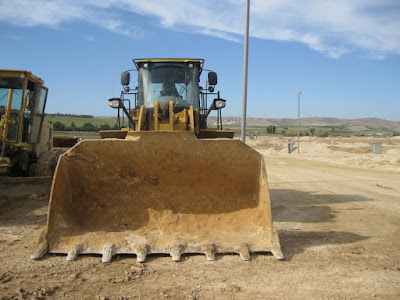 X-ing out your enemy 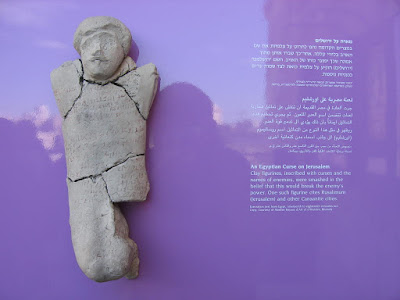 (Give the photo a click or two to read the text.)


My word of the week for ABC Wednesday is  XENOPHOBIA.
(zěn'ə-fō'bē-ə, zē'nə-) Fear and contempt of strangers or foreign peoples.
.
In ancient Egypt the custom was to inscribe on a figurine the name of your enemy and appropriate curses.
Then in an ancient ritual the figurine was smashed and the curses were activated, in the belief that this would break the enemy's power.
One such clay figurine bears on its chest the name Rusulimum (Jerusalem) and names of other enemy Canaanite cities.

I myself almost "fainted" when I first saw this display at Jerusalem's Tower of David Museum!
What an idea!
Talk about the power of words . . . Talk about hatred of foreign peoples . . . !
Can you imagine ever doing such a thing?
(BTW, "thing" and "word" are both expressed in Hebrew by the word davar. In the old days, a word was not just a sound you heard. No. A word was a thing in itself, having its own existence, carrying power. And if you know a person's name, you have power over him; you call out his name and he stops and turns around.)

The clay figurine is a copy of the original, courtesy of the Royal Museum of Art and History, Brussels.
The execration (!) text is from Egypt, 19th to 18th century BCE.
execration
1382, from Latin execrationem, noun of action from execrari "to hate, curse," from ex- "out" + sacrare "to devote to holiness or to destruction, consecrate," from sacer "sacred"

1. the act of execrating
2. a curse or imprecation: "The execrations of the prophet terrified the sinful multitude."
3. the object execrated; a thing held in abomination
.
See also "execration" in Jeremiah's strong words: Jer. 42:18:

18“For this is what the LORD of Hosts, the God of Israel, says: ‘Just as My anger and fury were poured out on Jerusalem’s residents,  so will My fury pour out on you if you go to Egypt. You will become an object of cursing, scorn,  execration, and disgrace, and you will never see this place again.’ 19The LORD has spoken concerning you, remnant of Judah: ‘Don’t go to Egypt.’ Know for certain that I have warned you today!

The giant silo--so near yet so far 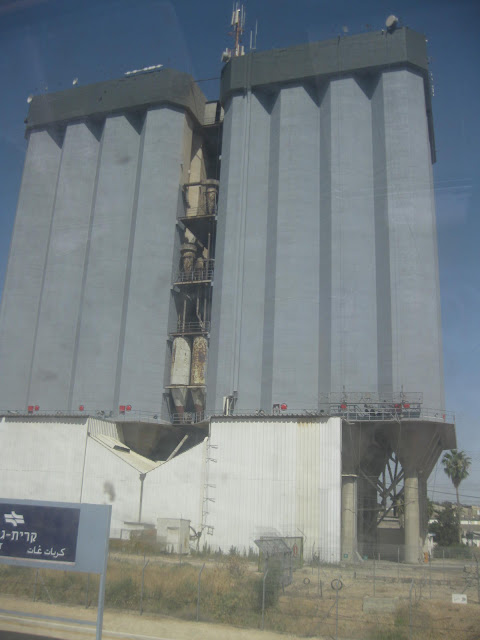 I always wanted to see the inner workings of a giant silo like this one in Kiryat Gat.
But it looks like my view from inside the train will be the closest I ever get.
At least I learned some interesting facts from the Shintraco Ltd. website:

"The Company carries a broad range of seed, animal feed and food products, such as wheat, wheat fodder, barley, corn for animal feed and others which are imported from Eastern Europe, Western Europe and South America; sugar imports primarily from Europe; millet imports (bird food) from China and Europe and smaller quantities from the US, as well as sesame seed imports; raw and peeled from the Far East India, China, as well as from many African countries (Ethiopia, Sudan, Nigeria, Kenya, and others)."

"Shintraco Ltd. was established in 1991 by Shalom Hatuka and Geneva's Proalim S.A.   Shalom Hatuka started his career as an agriculturist. The contacts he made over time (within the Arab sector) and his command of the Arabic language helped him in his activities as an importer.
The cancellation of Israeli government limitations on flourmills in Israel, which had restricted mill owners to purchase only US wheat, represented a breakthrough in wheat imports to Israel. Flourmills began to demand imported wheat from other countries in order to mix different types of flour together, which allowed for prices to decline. Because of its international connections, Shintraco has transformed quickly into a reputable importer of wheat."
.
Posted by Dina at 3:26 PM 5 comments: 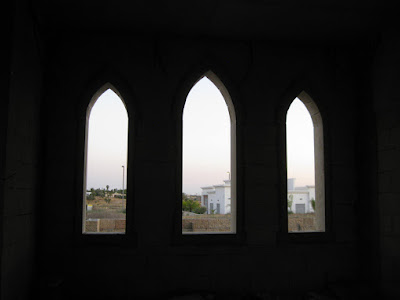 An evening view out the windows of a new building going up in Meitar. 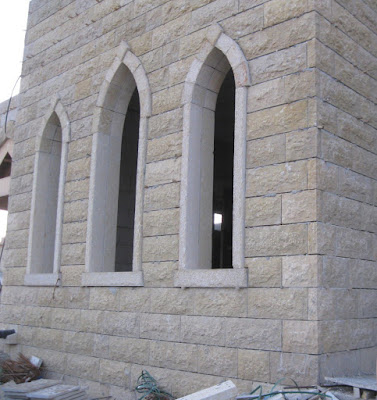 Meitar was founded in 1984 here in the northern Negev as a yeshuv kehilati, what I like to translate as a planned community.
Over the years,  five neighborhoods have been built, one after another.
Now Number six is in progress.
See this aerial orthophoto from 2014 to grasp the layout. 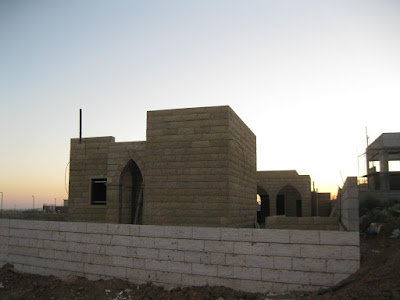 I'm so curious what this will be.
A public building, I'm assuming.
The architecture looks almost like a mosque, but we have only a small percentage of Bedouin families living in Meitar, probably not enough to warrant a mosque. 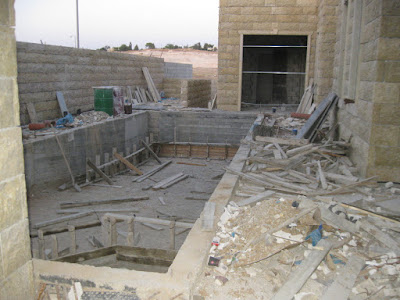 Maybe this sloping hole in the ground will become a big mikva, and the building is really a synagogue?
Time will tell.
.
Meanwhile, for ABC Wednesday, W is for wonderfully weird windows and walls.
.
Posted by Dina at 7:20 PM 13 comments: 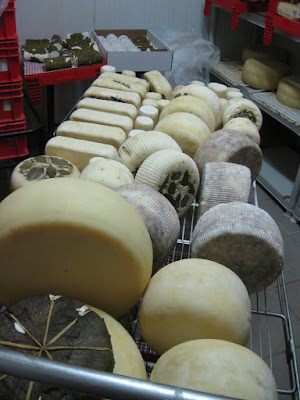 Happy Shavuot!
Today is the Jewish holiday during which we feast on dairy food.
For all kinds of reasons why, please look at Chabad and/or About religion. 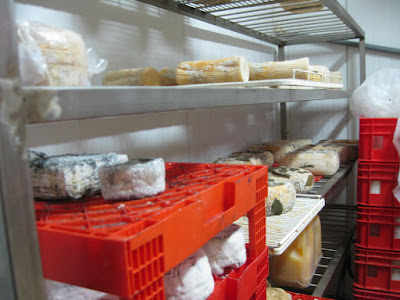 Just recently I discovered this dairy that creates all kinds of goat cheese, yogurt, and labaneh.
It is a 20-minute drive from my town and is really in the middle of nowhere.
This is a rare independent farmer (i.e. not a kibbutz or moshav) and his family raises goats and cattle and does lots of good things.
More about them later, after I can go back for a longer visit.
Meanwhile, chag sameach, happy holiday!
.
Posted by Dina at 9:55 PM 8 comments: 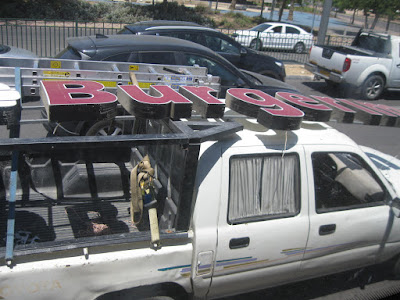 Seen from the bus in Beer Sheva, a sign on the way to a Burgerim fast food place?
It's an unusual contribution to Lesley's meme,  "signs, signs, a weekly meme of interesting, funny, ridiculous and unexplainable signs."

Burgerim opened its first place in Tel Aviv in 2008 and is now a successful Israeli franchise, with more than 80 stores in Israel.
The idea is to sell to each customer several different kinds of small burgers instead of one giant (and messy) one.
In Hebrew, burgerim is the plural of burger.
I've never eaten there, but here is a short video telling the story, if you really want to know.  :)
.
Posted by Dina at 5:18 PM 10 comments: 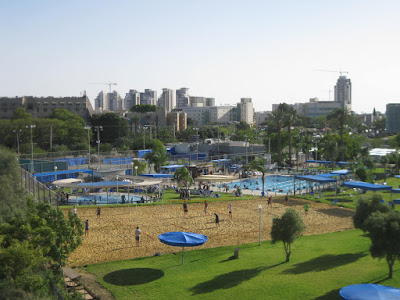 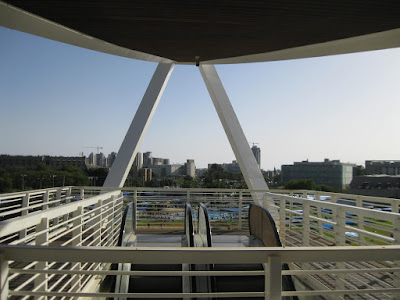 It was the view from the bridge this afternoon.
I think all those fun things are part of the Ben Gurion University of the Negev sport complex.
I've never really seen them before; lucky I climbed up to the Double Helix bridge and looked down.
.
(Linking to Our World Tuesday.)
.
Posted by Dina at 9:28 PM 8 comments: 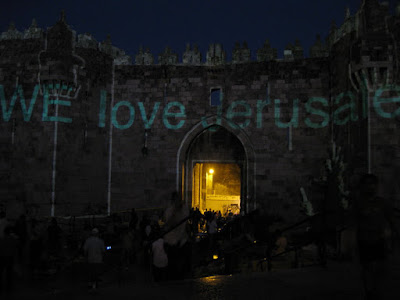 Happy Jerusalem Day!
"We love Jerusalem" on the Damascus Gate (from a light festival a few years ago).
.
Posted by Dina at 10:26 PM 7 comments: 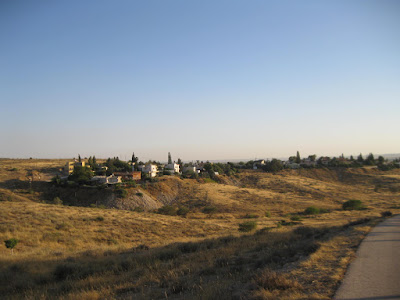 Here's the 6:00 pm summer-blue sky over my town in the Negev desert. 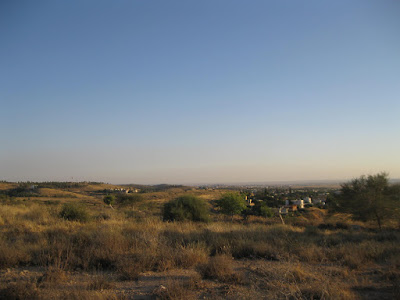 And this is the same angle but from a higher elevation, after we walked up a hill.
If you enlarge the photo, you can see our Northern Neighborhood on the right.
It was the first section of Meitar, begun in 1984.
To the left is the Southern Neighborhood, which followed.
Off in the distance is Hura, a Bedouin town about three times bigger than Meitar in population.
Meitar has over 8,000 souls.
.
Shabbat shalom and happy Sky Watch Friday.
.
Posted by Dina at 10:52 PM 7 comments:

Almost-evening light in the Austrian countryside 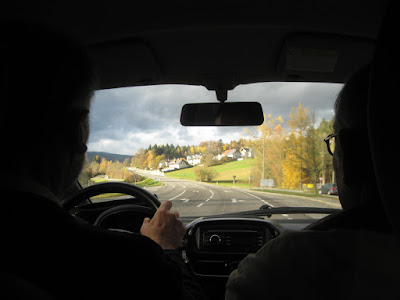 A late afternoon in November in the Austrian countryside gave nice light for today's Theme Day on Highlight and Shadow.