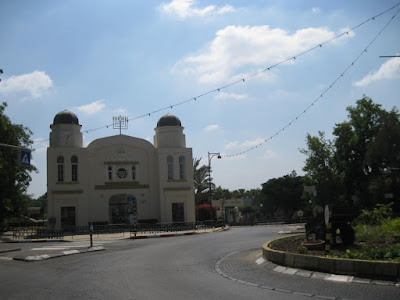 On a Beit Harav Kook study tour we visited the old "colonies" of Mazkeret Batya (originally called Ekron), Rishon LeZion, and Rehovot in central Israel.
Mazkeret Batya was founded in 1883.
In 1927 its first synagogue had to be razed, due to structural problems; and in 1928 the new Great Synagogue was built instead. 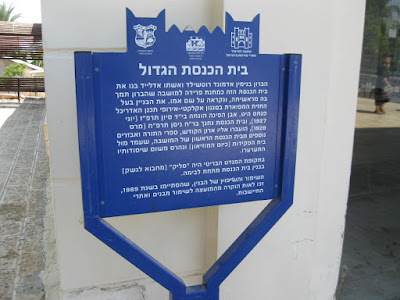 The sign notes a surprising fact: toward the end of the British Mandate, in the period leading up the war and to Israel's independence in 1948,  the Haganah force had a "slick," a secret weapons cache hidden under the bimah (the table on which the Torah scroll is unrolled and read).

Pictures of the interior of the synagogue after its 1989 renovation can be seen here. 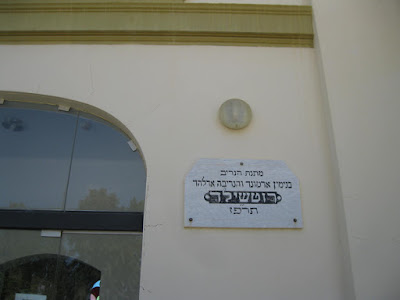 Baron Rothschild  and his wife, Adelheid, were great supporters of early Zionism.
He purchased huge tracts of land from the Arabs and got the Jewish pioneering families started in working the land.
Rothschild changed the name of the Ekron community to Mazkeret Batya in remembrance of his mother, Batya, who had just died.

You can learn more about Mazkeret Batya in this nice article by a tour guide
and/or at Wikipedia.
.
(Linking to inSPIRED Sunday.)
.
Posted by Dina at 1:37 PM 10 comments: 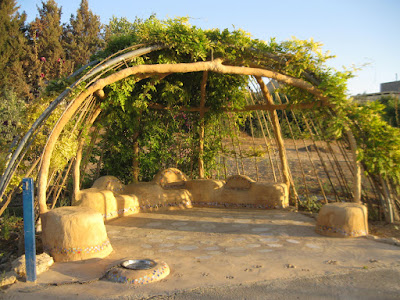 In honor of National Dog Day (in America, at least) and for Camera Critters meme, here are some fresh photos of our town's dog training promenade. 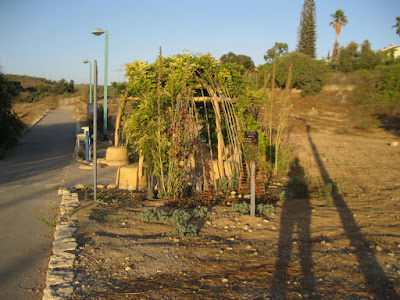 It is a work in progress, made by volunteers, friends of our local veterinarian Dr. Doron Avishai,  who died before his time. 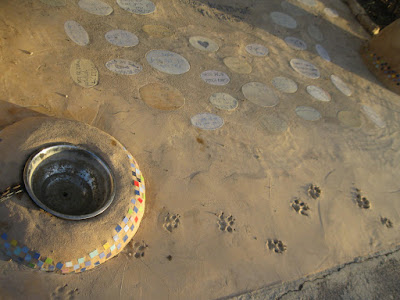 The builders left their names and messages in the concrete next to the water bowl.
To see how much has been added lately and to check out the various wooden training things, see my post from 2015.
And here you can enjoy pictures of the happy Dog Day that was held there in cooperation with the vet's widow. 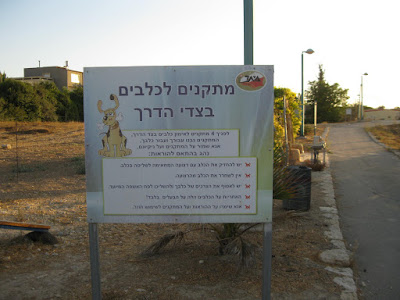 The main rule listed here is to keep your dog on a leash.
This is in contrast to the official bare-bones Dog Park built by the Meitar Local Council right across the path; see the difference here. 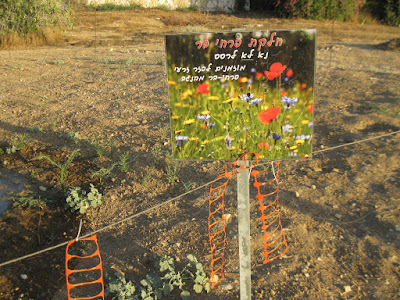 Another welcome new addition is a patch of bare land where the sign invites you to scatter seeds of wildflowers from our own Negev desert region.
There's also a caveat: Please do not spray here.

Pigeon in a bad place 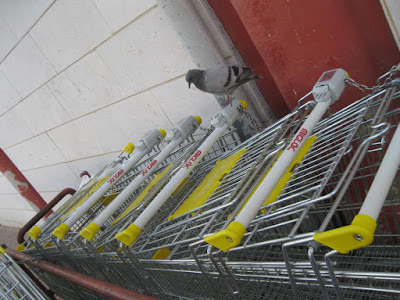 This is the first time (fortunately!) I've ever seen a pigeon on the shopping carts just outside our town's Shufersal supermarket.
It was standing on the slot where you put in your 5-shekel coin deposit.
The poor bird looked like it could not fly, as if its tail was too short or something not quite right.
Poor thing. . .
.
(Linking to Camera Critters.)
.
Posted by Dina at 10:54 PM 7 comments: 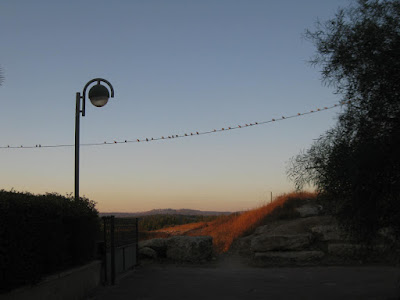 This is the spot where I often walk out of Meitar and into Nature.
It was Friday just before sunset, Sabbath Eve, and all these birds were on the wire as if in a long prayer line. 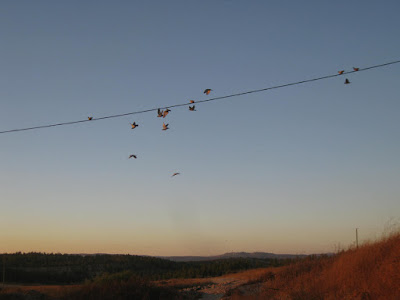 I approached quietly, slowly, respectfully; but there came a point at which they could no longer abide my presence.
And they took off.

(Linking to Camera Critters and to SkyWatch Friday.)
.
Posted by Dina at 10:45 PM 7 comments:

Being comforted on Shabbat Nachamu 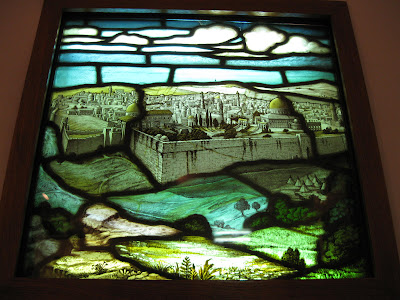 After going down to the depths on Tisha B'Av, mourning the destruction of the Temple and of Jerusalem [in my 9 B'Av posts], we are brought back to the light by Isaiah's visions of a better future.
He tells us that Jerusalem has paid the price for her sin and is now forgiven.

Are they not lovely and welcome words?!

The other verses are equally lovely and well-known.
You can chose your preferred translation of the Isaiah chapter:
"The Message" in modern English or NIV or the translation used by Chabad or the Hebrew with classic old English.

The painted stained glass window is exhibited at Hechal Shlomo museum of Jewish art in Jerusalem.
It was made in England in 1907, one of twelve windows that graced a synagogue in Manchester.
It is based on sketches made by 19th century pilgrims to the Holy Land.

Dean and Dina down by the sea 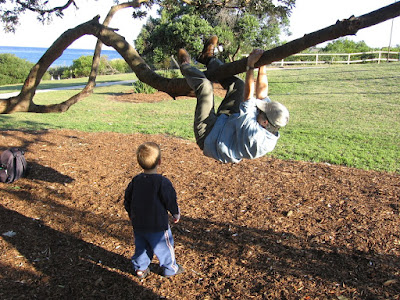 Number One grandson Dean and I were talking about sloths and how they hang upside down.
I decided to throw decorum to the winds and demonstrate, despite my grandmotherly age.
This was about ten years ago, in Australia, but I still remember the fun of acting young at heart in a public park!

Visit the gallery to see what other City Daily Photo bloggers dared to post for our August theme, "young at heart."