.
I am in a quandary whenever Q day comes around at ABC Wednesday. So today I have no qualms about not using Q words in English.
Instead I give you qamats and qubbuts. These are two of the vowels used in Hebrew. 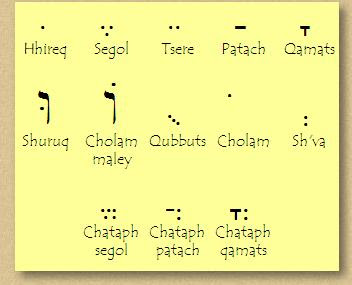 See them on the chart? 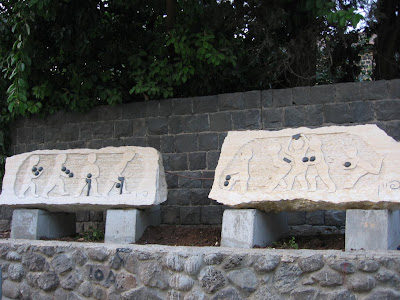 In Tiberias I was delighted to find a new (2008) sculpture, by David Fine, near the Sea of Galilee. 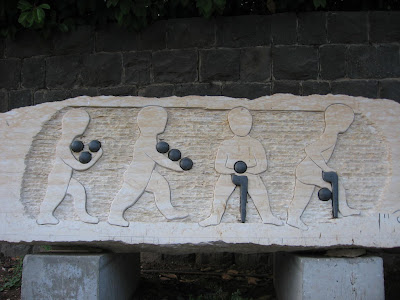 The vowels, in black basalt, are shown in playful positions! 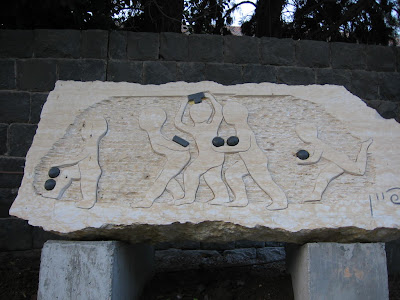 Actually, in modern Israeli Hebrew, we don't write the vowels very often. You will see a pointed/vocalized/voweled text only for some poetry or young children's books or a printed Bible or a newspaper in easy Hebrew for new immigrants.
Otherwise we just have the consonants and we have to "guess" how the words in context should be pronounced. If we left out the vowels in English, this blog would be from the Jrslm Hls. 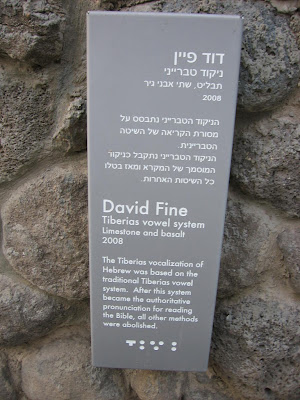 As the sign says, "The Tiberias vocalization of Hebrew was based on the traditional Tiberias vowel system. After this system became the authoritative pronunciation for reading the Bible, all other methods were abolished."
That was the short explanation.
Here are parts of the long story, if you prefer, quoted from Wikipedia (here and here):

After the Talmud, various regional literary dialects of Medieval Hebrew evolved. The most important is Tiberian Hebrew or Masoretic Hebrew, a local dialect of Tiberias in Galilee that became the standard for vocalizing the Hebrew Bible and thus still influences all other regional dialects of Hebrew. This Tiberian Hebrew from the 7th to 10th century CE is sometimes called "Biblical Hebrew" because it is used to pronounce the Hebrew Bible . . . .
Tiberian Hebrew incorporates the remarkable scholarship of the Masoretes (from masoret meaning "tradition"), who added vowel points and grammar points to the Hebrew letters to preserve much earlier features of Hebrew, for use in chanting the Hebrew Bible. The Masoretes inherited a biblical text whose letters were considered too sacred to be altered, so their markings were in the form of pointing in and around the letters. . . . The Aleppo Codex, a Hebrew Bible with the Masoretic pointing, was written in the 10th century likely in Tiberias and survives to this day. It is perhaps the most important Hebrew manuscript in existence.
. . .
The Masoretic Text (MT) is a Hebrew text of the Jewish Bible (Tanakh). It defines not just the books of the Jewish canon, but also the precise letter-text of the biblical books in Judaism, as well as their vocalization and accentuation for both public reading and private study. The MT is also widely used as the basis for translations of the Old Testament in Protestant Bibles, and in recent years also for Catholic Bibles.
.
Posted by Dina at 8:11 PM