A veneer of Jerusalem stone

Since the 1920s, when the British (as in British Mandate) made it mandatory, all new buildings in Jerusalem must be cladded with Jerusalem stone. 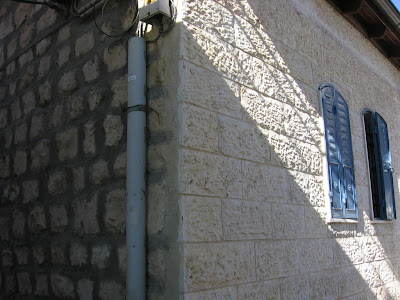 But as we can see with this little 19th century house in the old Jerusalem neighborhood of Nachlaot,  "It's all a facade."
What faces the street is handsome Jerusalem stone, maybe recently added;  but in the shadows lurk the original thick, simple, strong building stones.

You can click once or twice to enlarge the photo and decide which side of the house you like more.
.
Posted by Dina at 9:54 PM

I knew the British have a lot to answer for but I didn't know about this. I feel the plain stone is more pleasing.

How interesting, Dina. There are plenty of similar rules here in the UK in some towns and villages. Love the shot. I like the more 'finished' look to the front.

That's really interesting Dina, never thought of what was there before the beautiful Jerusalem stone. I just know that you can tell the difference between the old and the new stones.

more than a good image, informative!

It does have a beautiful antiquity sort of look to it and keeps the original look of the city... perhaps?

Very interesting and it's nice of you to show us both "in one".

I am all for the Jerusalem stone!

Very nice textured photo. I love the shadows and colors.

I like both, but maybe the added layer of Jerusalem stone insulates the house even better?

Loving the history lesson. I can't decide if I like the 'natural' stone better than the 'finished' stone. If I were building here, I'd want finished - fewer places for rain and snow to lodge and do their work. But there... hm.

Too many bare, cemented stone blocks here, so it's good to see a city that cares what it looks like, even if it's just a facade.