My most unique Christmas ever!

.
"Today the virgin gives birth to the transcendent one,
and the earth offers a cave to the unapproachable one"


--from the Byzantine Kontakion on the Nativity Tell me, what were the chances of me being led to a hidden ancient grotto in the desert davka on Christmas day?! 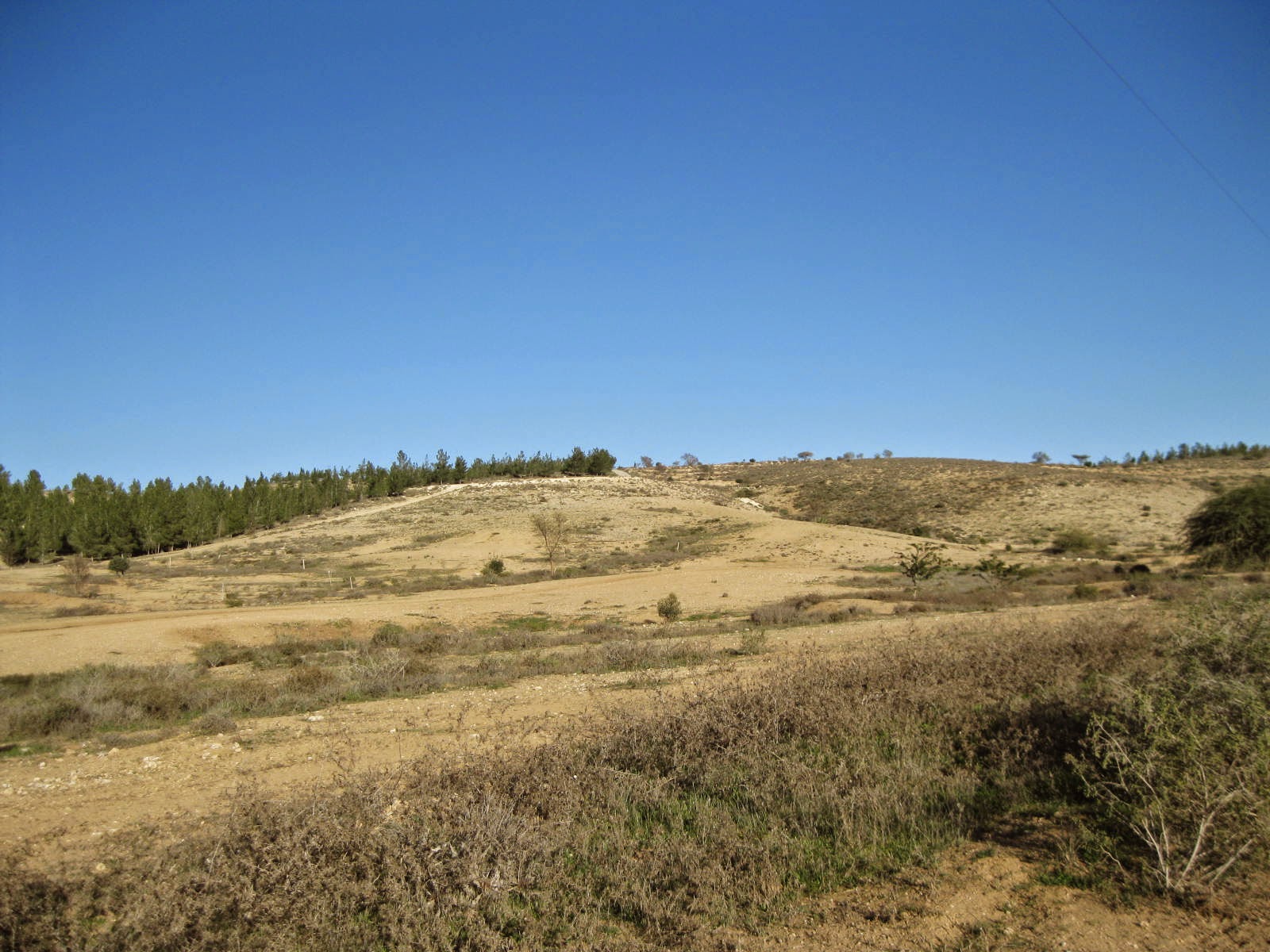 I woke up feeling sad that this would be my first Christmas far away from Jerusalem and from the smells and bells of  her old churches, far from any Christian friends, far from my nun-friends' Christmas roast chicken and panettone.
Because now I live in the Negev desert, in the middle of nowhere, alone.
(Yes, even we Jews enjoy the drama and mystery surrounding Dec. 25, once a year.)

Over morning coffee, a new video episode from the inimitable Sr. Dr. Vassa popped up on Facebook.
She spoke of loneliness being more acute on Christmas and how we can turn things around by focusing on certain things that can liberate us from the rut of self-pity.
(Try this brilliant young  Orthodox nun's on-going video series, you'll love it.)

So I left the cold apartment and walked into the warm sun.
Two short blocks brought me to the end of Meitar, to the edge of the desert.
I vacillated -- nu, which direction to take, -- east, west, or north?
Finally I said "OK God, it's your call.  Lead on."
He did;  we turned  to the East.

In the photo above, if you click on it a few times, you'll be able to see a strange bit of whiteness inside the fold of that hill. 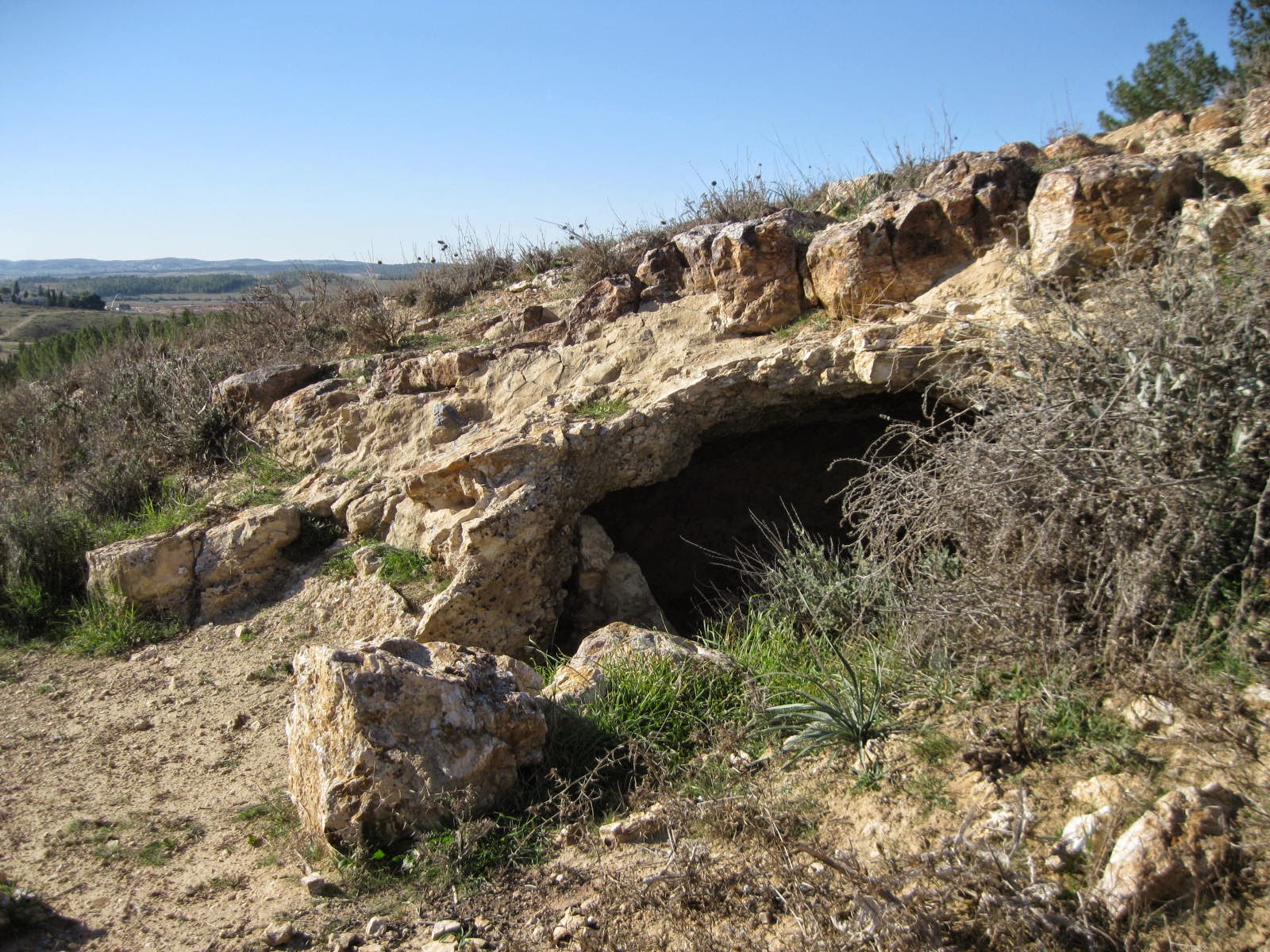 I traversed afar over zillions of sharp dark flint stones scattered on the earth and suddenly, above that whiteness, I came upon a cave!
To enter?  Of course Dina, throw caution to the winds! 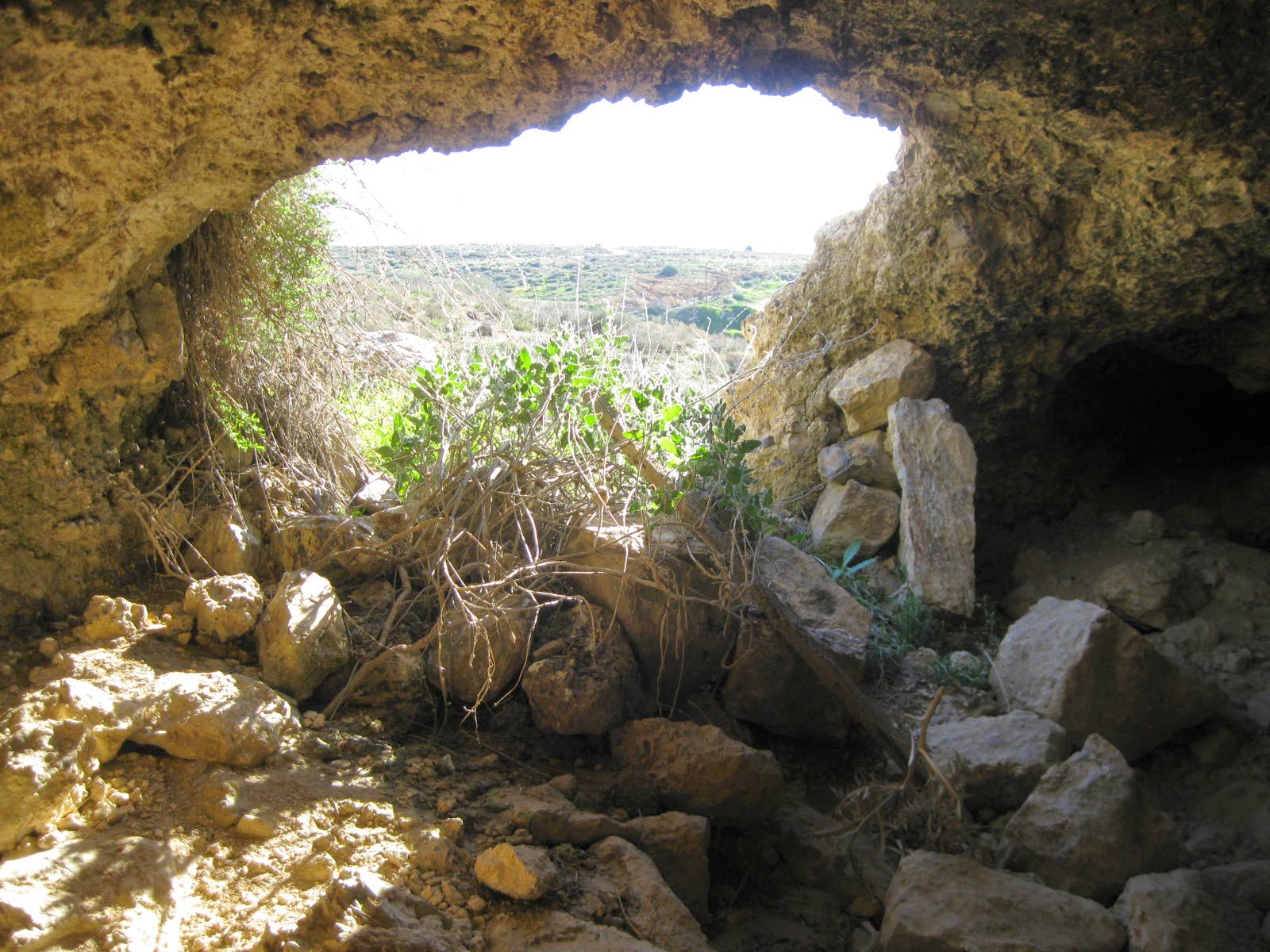 That's it! I was inside, looking out.
Nothing or no one attacked me, this is, except for a great feeling of awe and excitement! 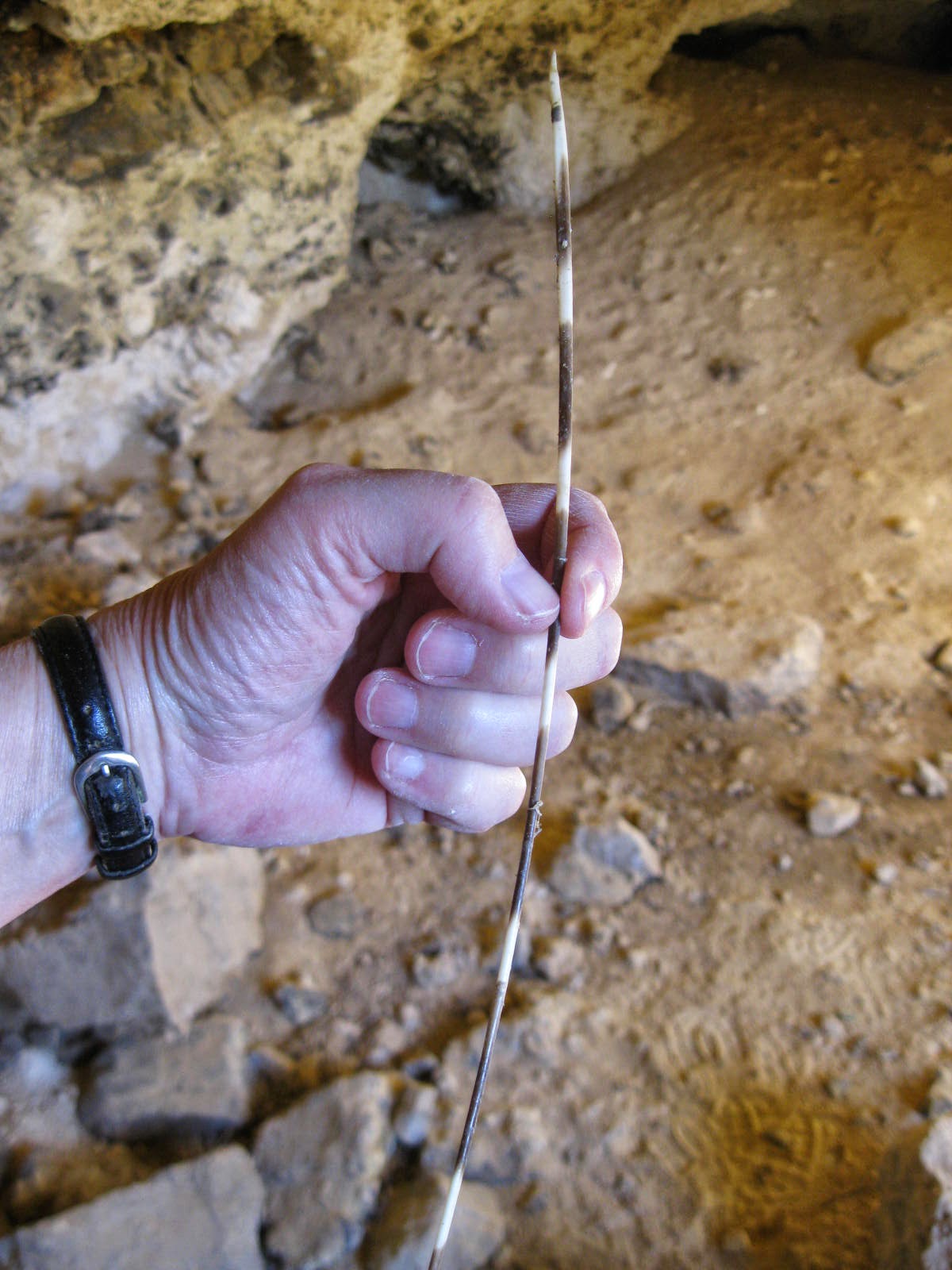 There was no ox or ass, but other animals had been there.
Like a porcupine! 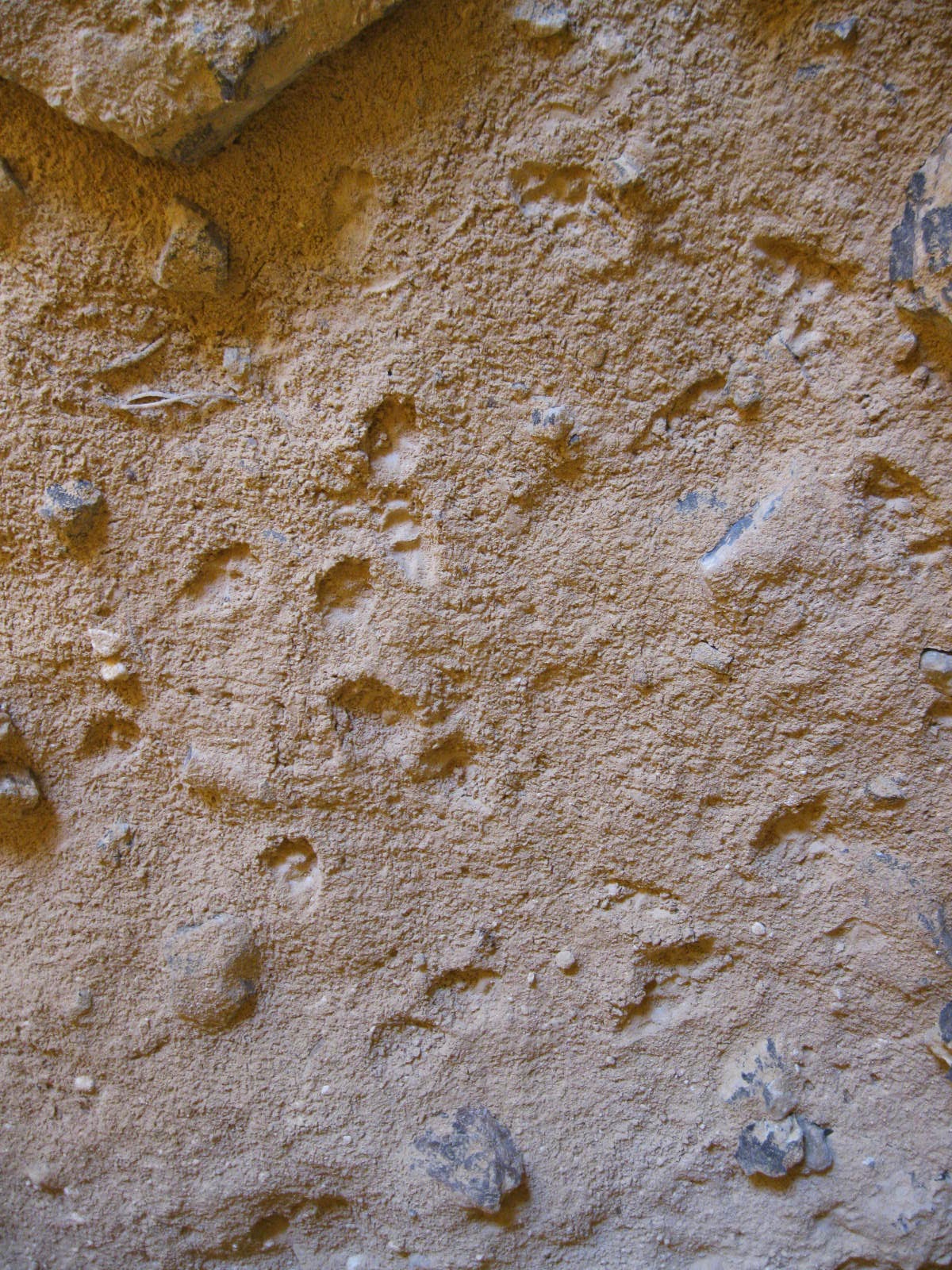 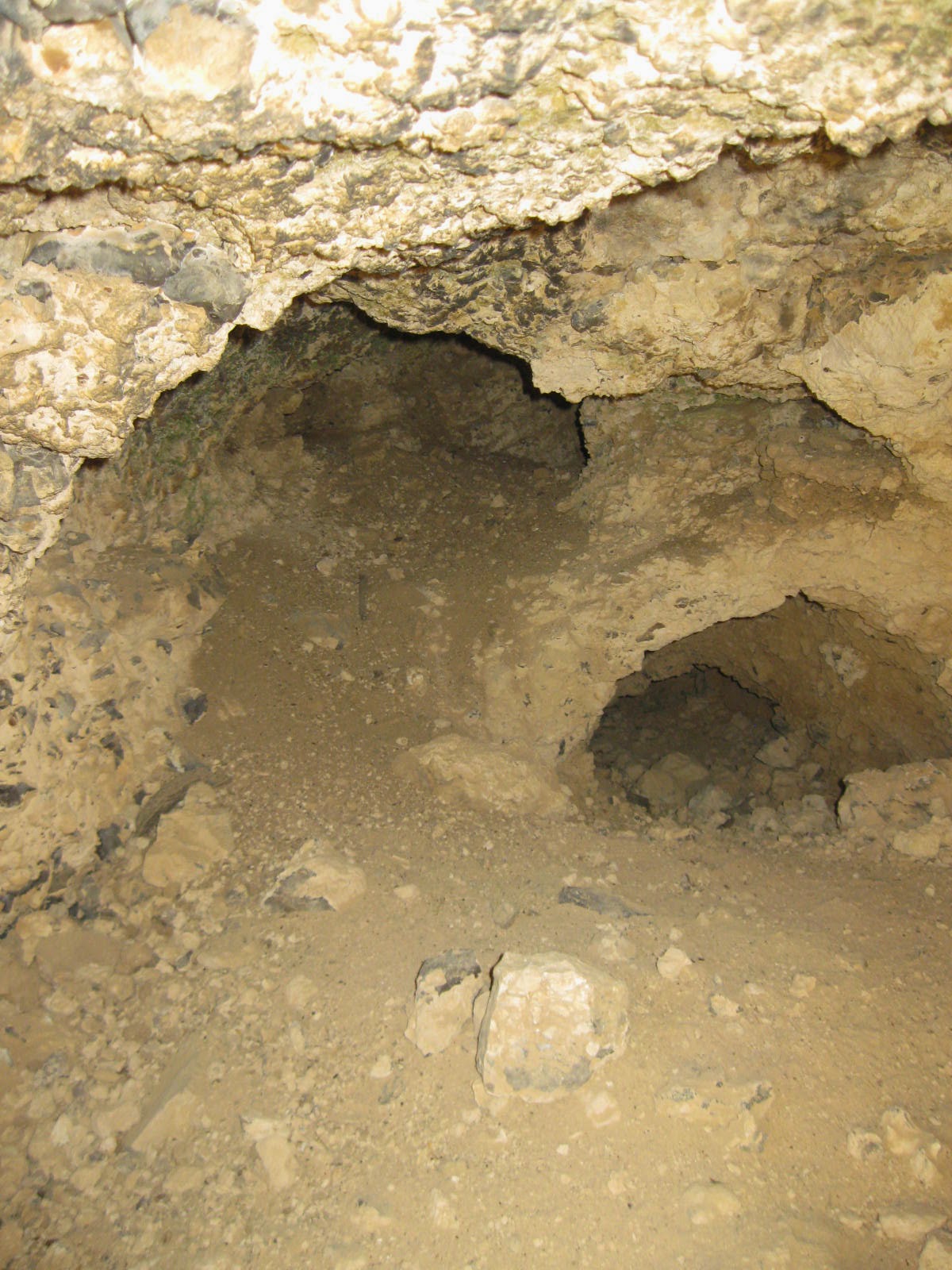 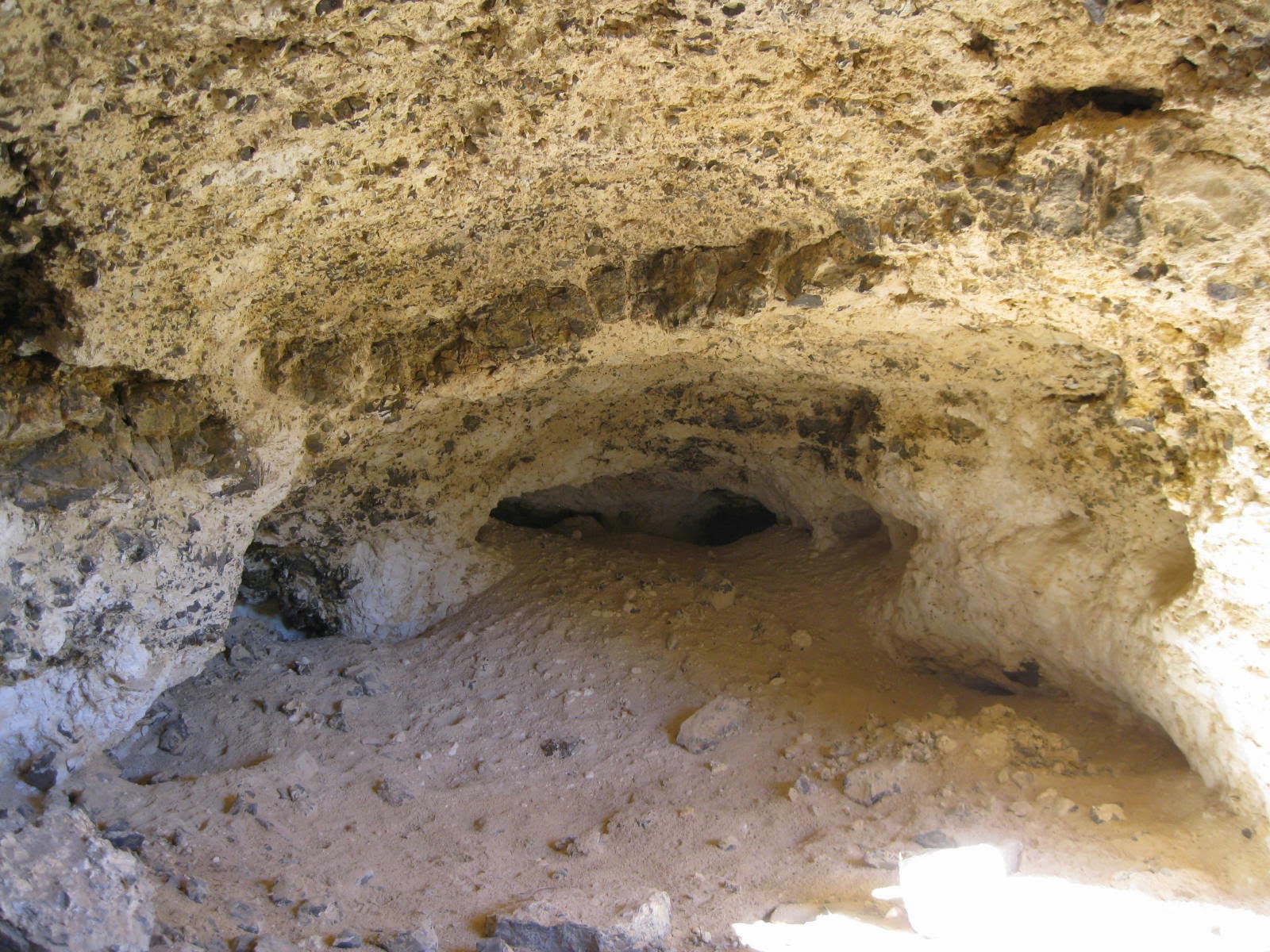 I hated to disturb the layer of dust of the ages by trodding on it.
No one had been in this cave for a very long time. 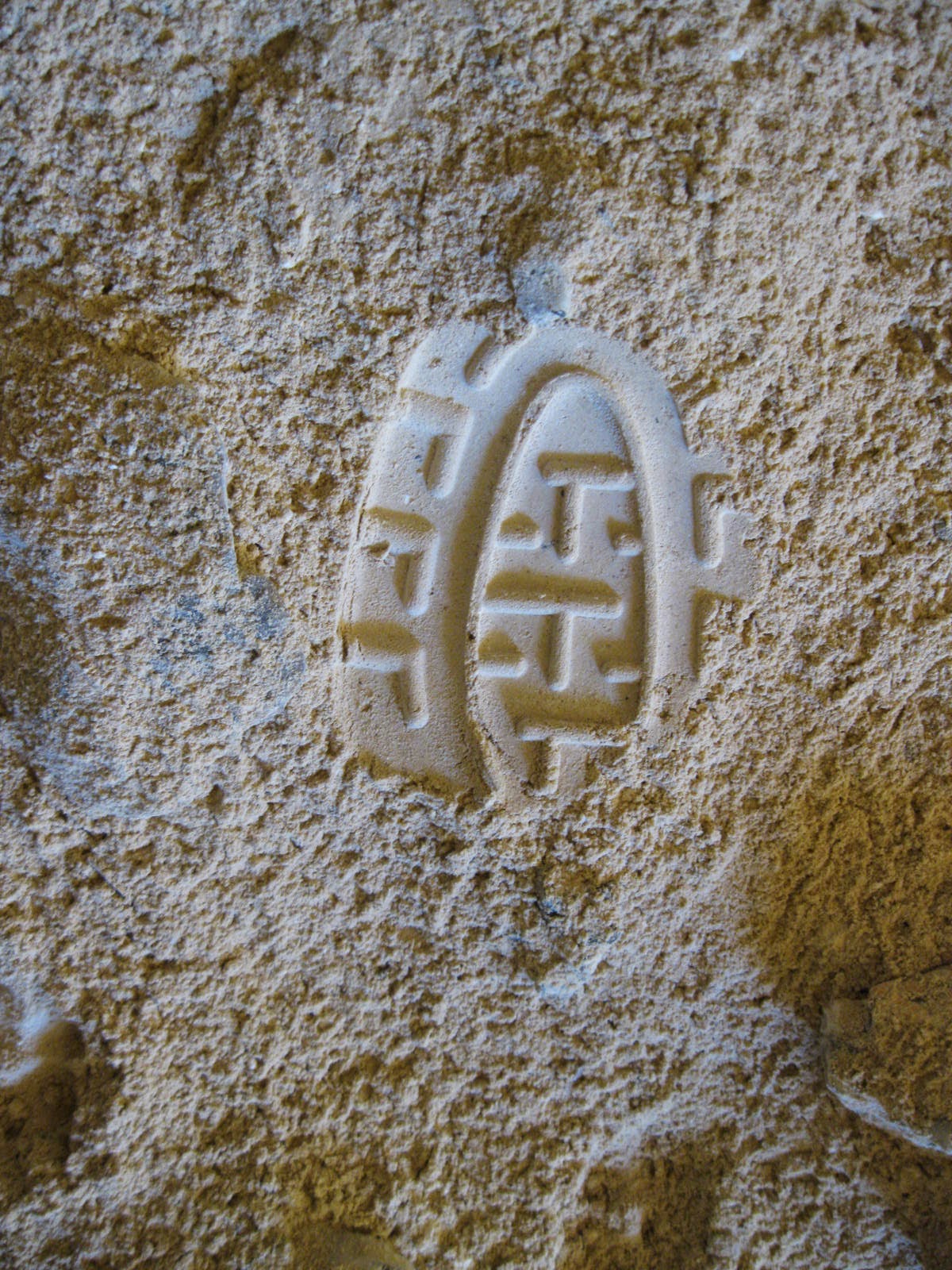 I made just a few footprints. 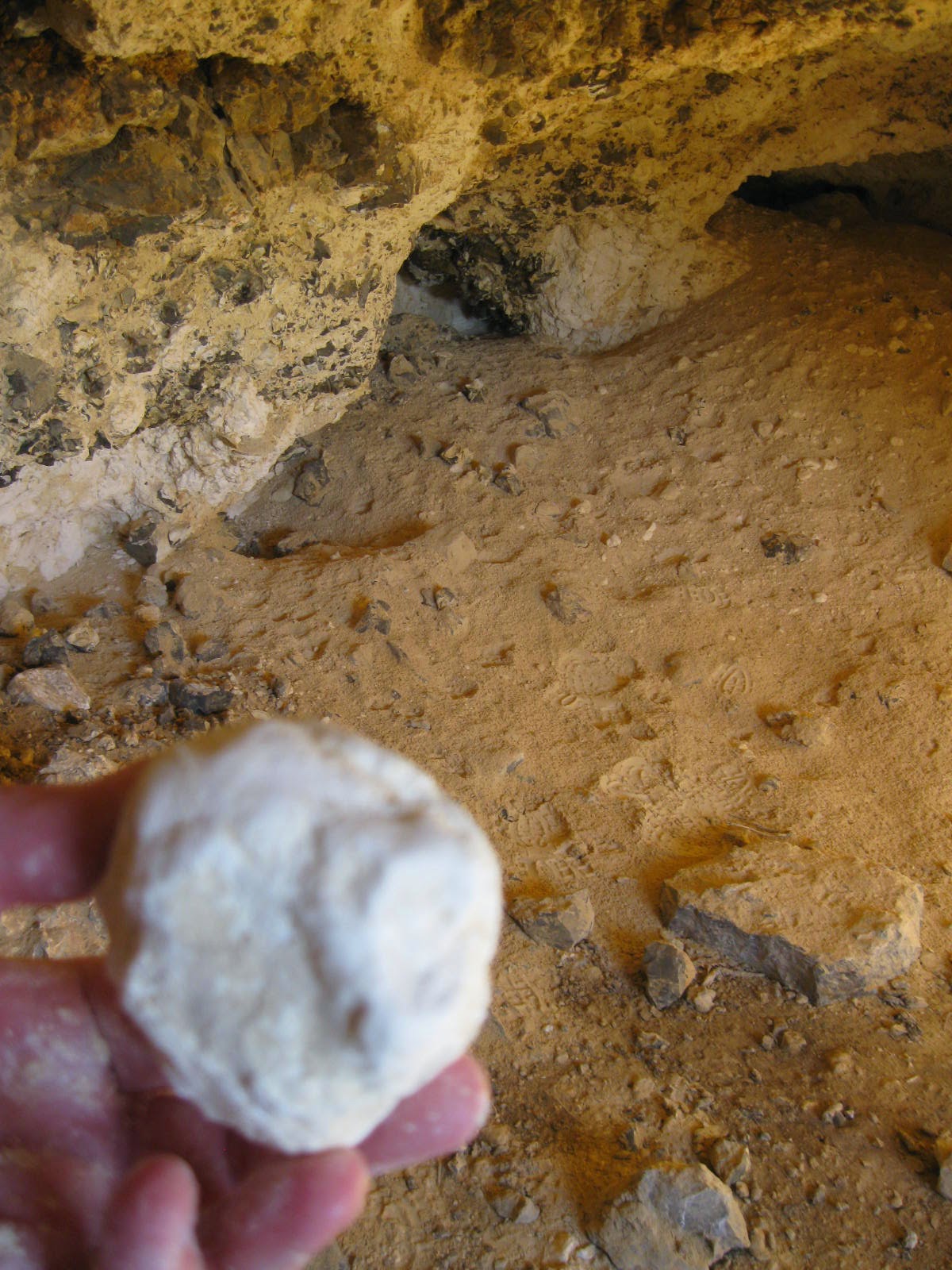 A ball of chalk on the floor!
You could crumble it with your hands. 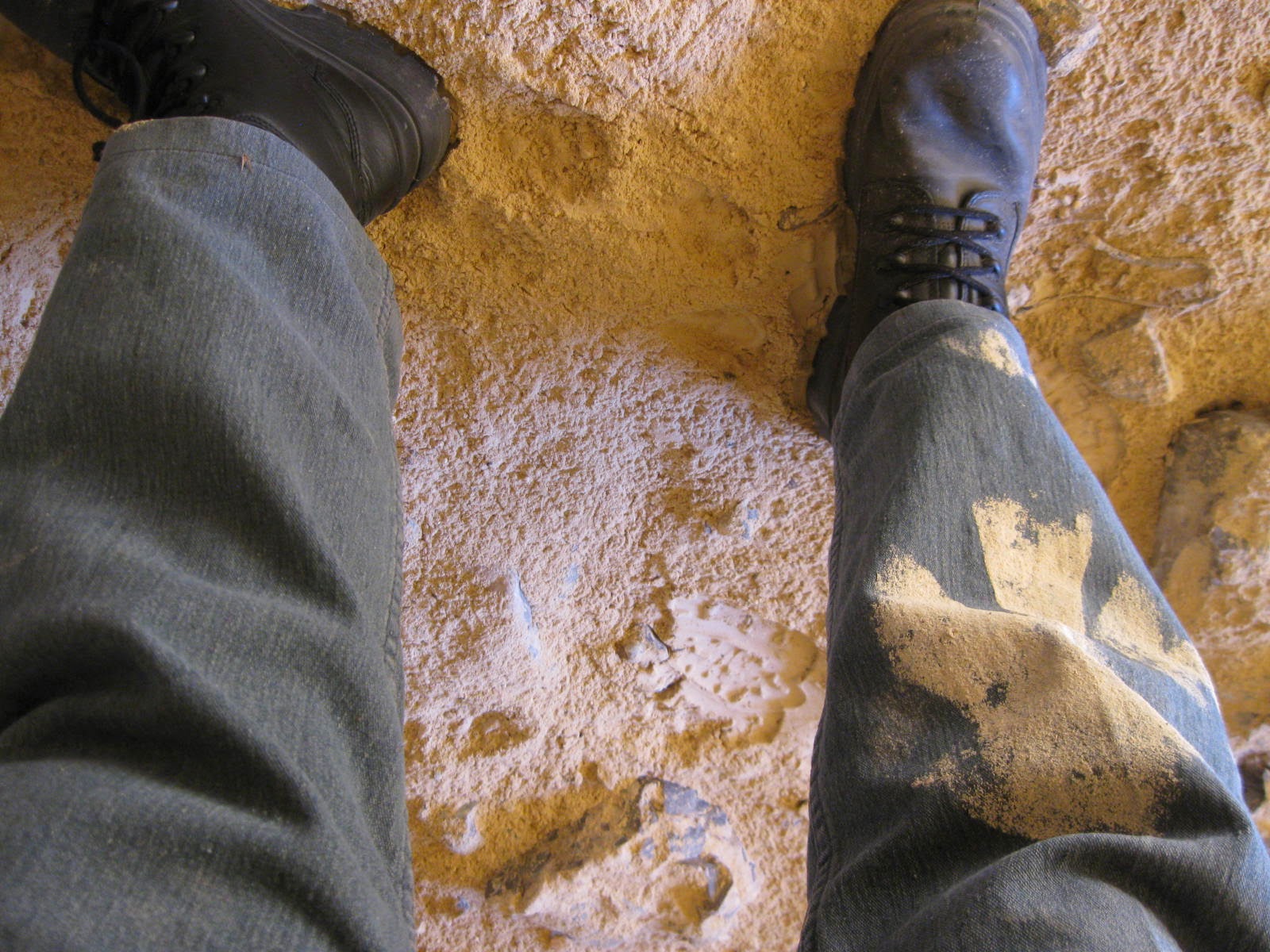 The stuff clings to you, were you to kneel.
Well, I was just doing a tiny bit of archaeology down there, honest.

After surveying the floor, the niches, the walls and ceiling of the very ancient place,  I knew the time had come to finally sit down on a rock and be quiet and attentive.
To reflect on the pathos of the nativity.
To imagine how Miriam-Mary felt,  having to give birth in just such a cave.
.
As Orthodox Christians sing in today's Kontakion,
"Today the virgin gives birth to the transcendent one,
and the earth offers a cave to the unapproachable one . . ."
.
Posted by Dina at 9:17 PM

what an awesome way to spend xmas!

Wow, so exciting Dina and a great way to spend Christmas day. Be happy for a quiet moment alone, often life all too hectic.

Surprises at Christmas are some of the most fun!
Happy holiday, Dina, and may the new year bring at least 365 surprises as wonderful as today's!

Quite a lovely cave for a spell of respite!

How transcendent & moving! I felt the age of the cave and the creatures that passed that way. Then you brought it home in the loveliest way. Beshert. You are blessed. <3

I giggled at your archaeology comment! What an adventure Sr. Dr. Vassa sent you on . . . and I'm so glad you ventured forth and shared your discovery with us. I LOVE the Orthodox celebrations for this season . . . so glad I found them. And, wow, I did not know porcupine quills were such deadly looking things.

You writer was sooo correct. She spoke of loneliness being more acute on Christmas and other special days.

I was overseas on my birthday one year, no family, no friends, no-one who knew what the date meant. I never want presents or cake with candles. But my loneliness that year was not about presents.

I live on a street called Fern Grotto,people are always asking what grotto means,this is a perfect example & love this post,thank-you for sharing & making me feel especially close to Jesus tonight,phyllis

A beautiful moment of quiet privacy, Dina. Thank you for sharing the story and photos with us.

Lovely post and photos, Dina! Thanks for sharing...My hubby would love to explore the cave.. Wishing you all the best in 2015!

This is a beautiful reflection Dina. Perhaps you discovered what it might have really been like that night.

A srtange an quite moving adventure!

What a good Christmas you had!

Now that was quite a Christmas adventure with a little bit of mystery thrown in for good measure.

What a fantastic experience, Dina! Great post, loved it.

How wonderful to read this post about an ancient grotto, similar to the one in which Maria gave birth to the Word of God.
Thank you Dina!
Wil.!
Happy holidays!

What a super find on Christmas day!