A coat of many colors 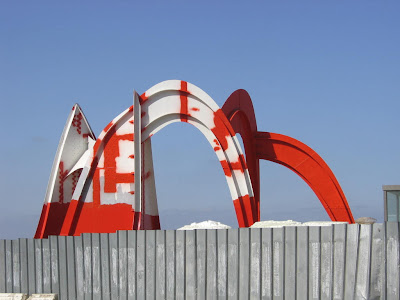 "Homage to Jerusalem - Stabile" was the last statue planned by the famous American artist Alexander Calder (1898-1976) and was installed in Jerusalem, on Mt. Herzl, in 1977.

Three years ago it had to be moved because an underground parking lot for Jerusalem's still under-construction tram line had to be built just there. Now it has been returned. To see slides on how the 65-ton metal statue was transported click here. 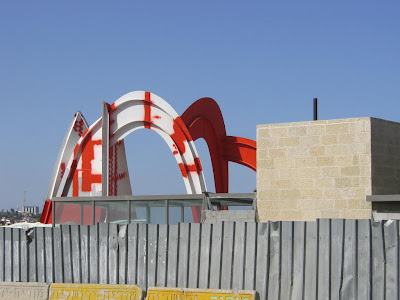 The by-now rusty looking metal was supposed to be restored to its original bright color with "Calder Red" paint, especially ordered from abroad. So what's with this white paint?? Is it some kind of Grundfarbe (base coat?)?
It looks funny. You can even see it from my house, across the valley, sticking out like a sore thumb on Mt. Herzl.

Calder was a mechanical engineer [as is my dear daughter, who also carries the artistic gene].
He pioneered the stabile, an abstract construction that is completely stationary. His examples were termed stabiles to distinguish them from mobiles, their moving counterparts, also invented by Calder.

In a catalogue essay Marc Glimcher writes that “Calder's invention of the stabile set the stage for a major revolution. The nature of his compositions along with the materials and construction allowed the idea of abstraction to expand beyond the gallery, the studio or the museum and spill out onto city streets… This unprecedented accomplishment simultaneously restored the place of monumental, public art and claimed it for abstraction. Scores of artists in the following generations have taken up the challenge of monumental abstraction, and in doing so have generated many of the ground-breaking developments seen in the last forty years of contemporary sculpture.”

I agree with Saretta, it looks like a candy cane. Great info and I hope they restore it to it's former beauty soon.

Saretta and Chrisss, oh yeah! I KNEW the colors reminded me of something. Thanks! Gosh, I haven't seen a candy cane in many a year.

Hi Dina! Great to see Calder back! Hope to see his red also back!Meanwhile Blogtrotter has now moved on to Mykonos! Hope you enjoy! Have a great week!

i suppose the white is the primer paint before the final colour is laid; at the moment, now that's it's surrounded by corrugated iron, it looks a little bit of a mess...

Kiwi thanks! Primer, yes, that's the word I always forget as a translation of Grundfarbe. When the State was young, many German words entrenched themselves in Hebrew.
You think THIS is a mess? I should publish pics of the rest of Herzl Boulevard, torn up for laying the train tracks.

petra michelle; Whose role is it anyway? said...

Hello Dina!
Someone once asked which is more beautiful manmade or natural? The question is an oxymoron and/or like comparing apples and oranges.
Yet there are structures such as these which are so worth noting. In Manhattan are the NYC Waterfalls which are comprised of 4
man-made falls. They're wonderous
and a constant reminder of the beauty we can create and instill.
Hope you had a wonderful Holiday, Dina!

i'm sure that herzl boulevard couldnt possibly come close to the mess that entrenches itself on our roads when they are being reconstructed - sometimes my town, even the outer part of it, is a nightmare to drive in

It looks like primer, yet there is a certain pattern to it too. I wonder what's going on with that.

Hello Dina !
Thank You for the explain, also...

I smile because "the giant candy" is very, very strange... No ?

The red represents the bleeding of Zion, and then the white pure exalted form.

I love to give my interpretation of abstract art. Thankyou for the opportunity from sacred Jerusalem.