.
Today Israel marked the 105th anniversary of the death of Benjamin Ze'ev Herzl (1860-1904).
This menorah greets visitors to the highest spot in Jerusalem, Mount Herzl, where Herzl's body was reburied after being brought to Israel in 1949.
Following the Dreyfus Affair young Herzl concluded that the Jewish people required an independent state of our own. His book The Jewish State detailed the Zionist vision and he founded the Zionist Movement.
. 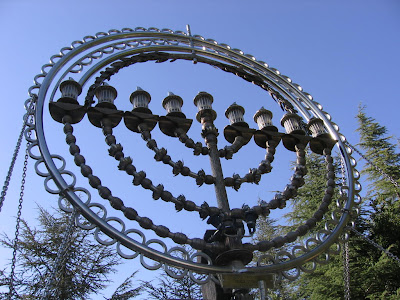 But two things he got wrong.
First, he believed that once Jews had a homeland, anti-Semitism would end.
Second, he thought that Hebrew could never be revived as a modern language for the new country. 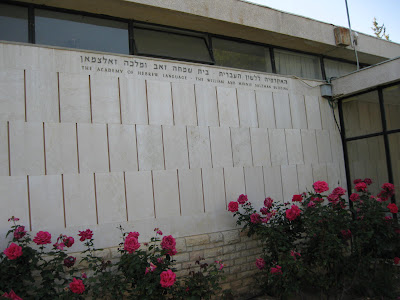 This building proves that Hebrew is now alive and well. It is the Academy of the Hebrew Language on the Givat Ram campus of the Hebrew University of Jerusalem.

"Brought into being by legislation in 1953 as the supreme institute for the Hebrew Language, the Academy of the Hebrew Language prescribes standards for modern Hebrew grammar, orthography, transliteration, and punctuation based upon the study of Hebrew’s historical development.
The Academy’s plenum consists of 23 members and an additional 15 academic advisors, all outstanding scholars from the disciplines of languages, linguistics, Judaic studies, and Bible.
Its members also include poets, writers, and translators.
The Academy’s decisions are binding upon all governmental agencies, including the Israel Broadcasting Authority."
. . .
"The scientific secretariat answers queries from the public on a broad variety of Hebrew linguistic matters ranging from pronunciation and spelling to suggestions for Hebrew children names.
It also oversees the work of specialized committees that develop technical terminology for a wide spectrum of professional spheres.
Over 100,000 terms have been coined by the committees on terminology established by the Academy and its predecessor, the Language Committee.
These terms are available to the public in dozens of published dictionaries and lists.
. . . The Academy invites you to participate in the realization of the dream of renewing the Hebrew language."
.
Posted by Dina at 10:08 PM