Remember the Roman antiquities in the basement that we posted about yesterday? 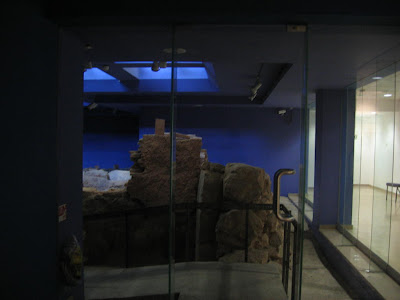 Preserved under and behind glass are two kilns used by the Roman Tenth Legion 1,900 years ago. 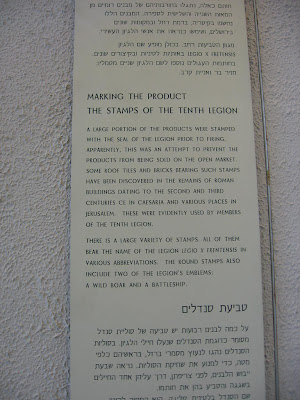 If you wouldn't mind, click and enlarge this and the other photos of signs. They tell the whole story. 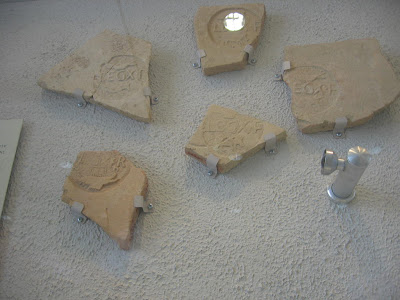 Stamped on the tiles are the symbols of the Legio X Frentensis--a warship and a wild boar.
I read elsewhere that the Romans added the unclean, traif, unkosher boar/pig just to anger the Judean subjects of Caesar. Maybe . . . 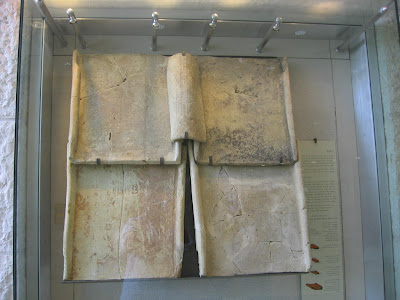 Here is how the tiles were hung on a slanting roof. 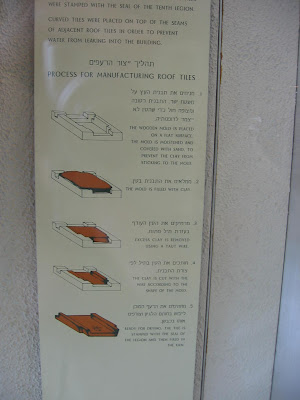 Here's how the tiles were manufactured. 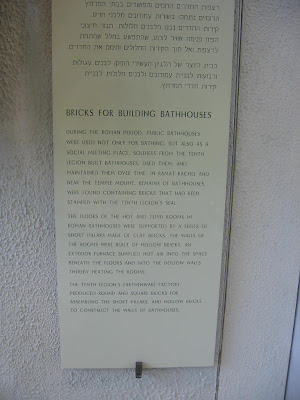 Much like the sauna in today's Northern countries, the Roman bathhouses served as a social meeting place. The Legionaries built, used, and maintained them. 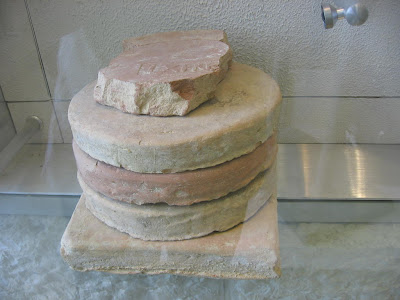 Pillars of round or square bricks supported the floor of the caldarium, the room with a hot plunge bath. 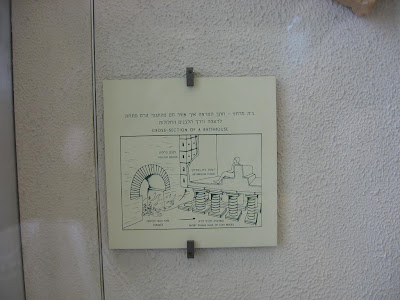 Hot air from a furnace circulated under the floor and in hollow bricks in the wall, heating the caldarium. 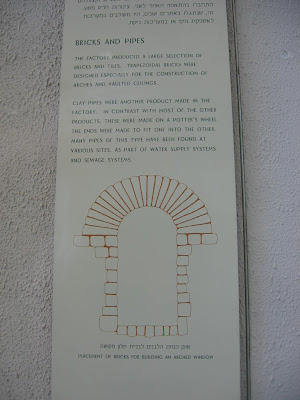 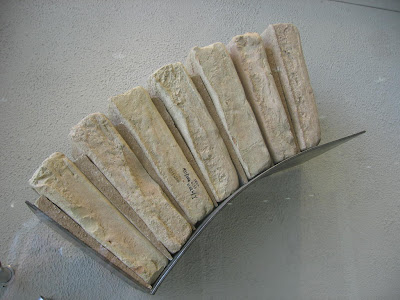 Trapezoidal bricks were designed especially for arches and vaulted ceilings. 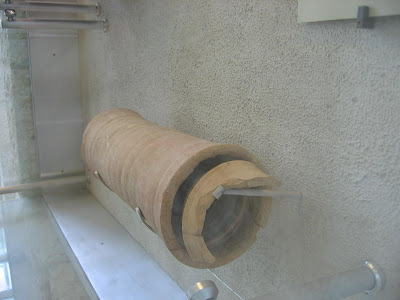 Each segment fit snugly into the other, forming pipes to carry either water or sewage. The pipes could stretch for miles.
.
Thankfully, the Roman soldiers in Jerusalem knew how to build as well as do battle. And thankfully, the Israel Antiquities Authority had the good sense and the vision to preserve part of this site right here in the middle of modern Jerusalem.
Posted by Dina at 6:17 PM

History is just wonderful. Thanks
Patsy

so enjoyed this post...
i just love the past and all that it has to share with us.
have a lovely week

What an interesting post. I love learning new historical facts and your pictures are very good, the text is easy to read.

Interesting history lesson.
Surprisingly there is even a sauna in there.
Wonderful builders they must of been.

I like places with layers and layers of history. Its something I miss in Australia.

I have always been fascinated by the building of ancient structures. This gives really good insight. Thanks for the explanations, too.

A very interesting post, Dina. While reading it (text and images) I almost thought I was watching a video!

It's fascinating, isn't it?

I wonder what temperature the kilns went up to. These are considered earthenware and the clay from the area?
Thanks for taking all those close ups. A thrill to see ancient potters and Roman stamps.

Wow. This is an interesting post. Very informative. I like history but also always wonder about the people themselves who made this history. Where are they now? I understand all of the religious explanations and the biology but still I wonder.

This is all so remarkable, Dina. I loved looking at all your incredible pictures.

So very, very interesting, Dina! Thanks for directing me to these kiln posts. You've increased my delight in tile making (I didn't think it possible!). Beautiful. Thanks...
David

Thanks for sharing this interesting & informative post and some great pictures to illustrate it! Looking forward to your future posts.
Regards from Cape Town,
Pierre