Down to the river 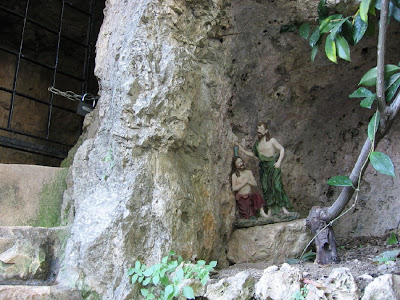 For the Roman Catholic Church and the churches in the Anglican Communion, the Feast of the Baptism of the Lord is observed on the first Sunday after Epiphany. Ya'ani, today.
For one thing, it is meant to remind Christians that the public ministry of Jesus began with a consecration--his baptism by John in the Jordan River.
.
Here are two pictures from our local monastery, which honors John the Baptist.
. 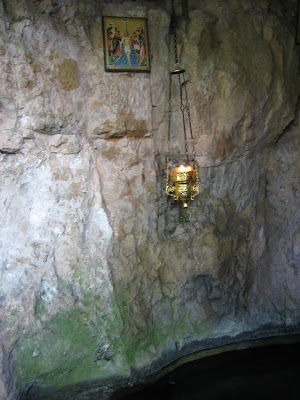 Click on the photo to better see the water and the traditional icon for the day.
.
While digging in the Internet I discovered a 5-minute movie trailer from Ten Thousand Films.
You can get a stunning aerial glimpse of the Jordan where it meanders and of the desert and of the dig going on at Bethany Beyond the Jordan.
.
(If it takes long to load, try going straight to YouTube.)
.
Here is what they write about the video:
.
"An archaeological-detective story uncovering the pieces of the ancient mystery of where Christ was baptized. Christians around the world know Bethlehem where Jesus was born, and Jerusalem where Jesus died and was resurrected, but no one knows the location of his baptism. This being one of the three holiest places of Christianity.
Where was he baptized? Why was the site lost? How was it discovered and what was found there? The remarkable story of how the actual location of Jesus’ baptism had disappeared from human memory, lost in time for almost 1000 years; And the fascinating story of its rediscovery and the ongoing excavations taking place there. Only 5% of the area has been dug until today. Who knows what else lies beneath this place and what it could reveal about Jesus Christ and the birth of Christianity.
.
The 53 minute documentary is concerned with the recent discovery of the baptism site of Jesus Christ in an area known as ‘Wadi al-Kharrar’ on the east bank of the river Jordan, the 'Bethany Beyond the Jordan' of the Gospels. A complex of unique churches, baptismal pools and monasteries are amongst the important discoveries uncovered so far.
.
The area, since the 1967 Arab-Israeli war, was a military zone and heavily mined making it impossible of access. However in 1994 after Jordan and Israel signed a peace treaty, archaeologists begun their excavations. . . ."
.
Posted by Dina at 7:08 PM

Wasn't John the Baptist supposed to have been Jesus' cousin? This sounds like a very interesting historical detective story.

The Documentary brought your post into 3D for me, Dina. What a beautiful and captivating trailer... I've got to see this thing now. Why is it I haven't heard about this dig before? Ignorance always turns to education for me here at JHDP.
Thanks again, Dina
David

Thank you so much, Dina, for showing this fascinating video. I didn't know that today the baptism of Jesus was celebrated. We, protestants read about it, but celebrate only X-mas, Easter and Whitsunday. Of course we have first advent to prepare ourselves for Christmas, and the 40 days before Easter to prepare ourselves for the death and ressurection of Jesus. Thanks for this post!

Ahh yes, I've seen this before. Thanks.

The video is interesting, but when I was there in '92 they showed me another places and I still have some pictures. It was on the Jordan near lake Kinneret, but I don't remember the name...

Yes, Mary and Elizabeth were cousins, so I guess that would make Jesus and John second cousins.

Today throughout the Christian world, catholic and protestant (not sure about the orthodox)commemorate the Baptism of Jesus. It's another manifestation of God incarnate, like the Epiphany, which was last week.

Shalom VP and all: The place where groups of pilgrims/tourists inside Israel go for immersion/baptism in the Jordan River is a specially-built, orderly, safe place called Yardenit. It is just south of the Sea of Galilee.

A video of it:
http://www.yardenit.com/yardenit2008.wmv

Some traditions say that the baptism of Jesus was in the Galilee.

But the more likely spot is the one I posted about, the place east of Jericho that we call Qasr el Yahud. But it is now unfortunately situated in the middle of an international border (the Jordan River being the border between Jordan and Israel).

Only on a few holidays like Easter and the Greek Orthodox Theophany does the Judea and Samaria Civil Administration open the approach to the border and let pilgrims walk up to the river and the baptism site.
Then there is a long procession, sometimes with 10,000 pilgrims, and maybe a mass baptism.

Your postings never cease to amaze me! They're loaded with interesting tidbits of information, history, etc. Shalom my friend!

I learn a lot from you, Dina. Thanks! I have bookmarked the trailer to watch tomorrow when there will be fewer distractions, I hope!

It is the place where mysterious power seems to be provided.

Many thanks for this fine post, Dina. I think that speaking about Jesus, also only from the human point of view, is always a sublime experience.
Happy new week!

Yes, it was Yardenit, I remember now.

We lived on that kibbutz for a while, I used to really enjoy seeing all the groups come to the Yardenit, especially the ones who would sing gospel songs and really get into the spirit of it all.

Very fascinating, Dina! «Louis» sent the link to this post to some of his friends.

Thank you for consistently taking us to the holy places of faith.

Dina, cannot thank u enough for your blog.It transports the Holy land right into our homes as travelling there is prohibited by our passport. Please keep on blogging.