.
With today's Z, ABC Wednesay has completed yet another cycle of the alphabet, thanks to our much-appreciated host Denise (Mrs. Nesbitt). 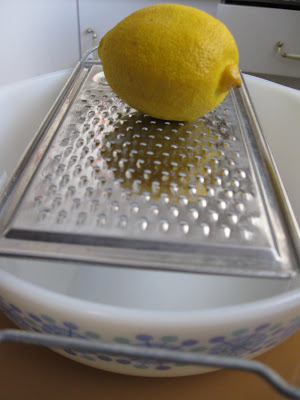 .
"Zest, also known as citrus peel, is a food ingredient that is prepared by scraping or cutting from the outer, colorful skin of citrus fruits such as lemon, orange, citron, and lime. Zest is used to add flavor ('zest') to foods." (Wikipedia) 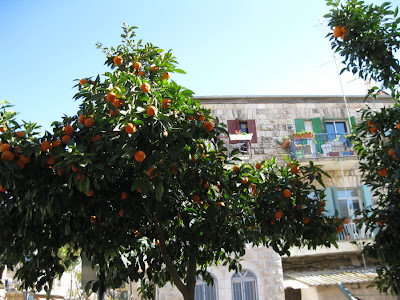 Yesterday I was amazed to see two orange trees growing in urban Jerusalem!
Right in the sidewalk in one of the old neighborhoods near Nahlaot.

Seeing a tree full of fruit adds zest to life!
.
In fact there is a lovely mitzvah called Birkat Ilanot, the blessing on the trees, which is done once a year, in spring, with awe and gratitude, the first time you see a fruit tree blossoming.
Its source is a gemara in the Talmud, Masechet Berachot 43b:

“A person who goes out during the days of Nisan and sees trees in bloom, says,
Blessed are you Lord our God, King of the Universe, who did not leave anything lacking in His universe, and created in it goodly creatures and goodly trees, to give pleasure to mankind with them."

What a great idea for the letter "z"! I like the capture, also, with its varied textures and the yellow so bright.

You have got zest when you tell me that zest also means citrus peel ;-)

Very nice photo of the orange trees in the city!

I knew of someone who wanted a zester, and for the life of me, couldn't figure out why. Maybe it's that *I* wouldn't use it much, but that person swore by it.

Ah, I have yet to think of my Z. I haven't evne posted my Tuesday world since I accidentally deleted the photos I had taken for it.

I so love lemon if only it will grow here in Michigan I will definitely plant this fruit. Thanks for sharing!

Good one, Dina! Lemon is one of «Louis'» favorite flavors.

Even better is the prayer!

I could have some of that zest to bake a cake. In Auckland , i have a tree and I make lemon honey drink. I am not used to using the zest though I watch it on cookery shows on TV.

An excellent Z. Love the photos too, very nice.

Zesty! I can smell that wonderful fragrance from here!

I love the smell of the zest!

It's indeed good to add a little zest to life!

Now it's time for me to go upstairs and get some zzzzzzzzz!

I saw oranges on a tree few days ago, it was unexpected and pleasant.

Wonderful! Can you pick the fruit? Do they allow that?

Zest is a very great ingredient in several dishes. I used it for a kind of pancakes, together with grated apple.
Very good Z for this week! Have a nice week, Dina!

Great take on the alphabet.
Never knew zest is for the citrus peels.

Very clever post and clear, bright photo! Citrus crops are taking a beating now in Fl because of the record-breaking cold temperatures. Consider yourself lucky!!

Beautiful picture of the lemon and very interesting about the blessing. Maybe I should go out and try it on my little lemon and orange trees! (They were just planted a year ago.)

Sorry to sound obtuse but why were you so surprised to see the orange tree? I would have thought the climate would allow for many citrus trees!


Oh...and thanks for the translation, I was expecting something ummm.... slightly naughtier! ;-)

Thanks everybody, for your fun comments.

To answer Kay--
I wouldn't pick them because I assume the trees belong to the house owners in the building next to the trees.

Ciel--
You see a few orange trees here and there in people's private gardens but not on the streets of Jerusalem.
Most of our big citrus groves are to the west, nearer the Mediterranean coast, where it is warmer and the land is flat. Here in the mountains it wouldn't work.

Thanks Dina. I keep thinking of the orange trees everywhere on the streets of Seville...

Praise the Lord for the bounty. That looks like a lot of fruits in one tree, Dina. Does anyone own the tree? Or is it a "public" tree?

I love the composition of the picture with the lemon and the grater!

Orange trees are also growing in the middle of Rome and l even spotted some in Venice, with ripe oranges!