Japan and a joint Jordanian-Jewish exercise

.
Jolted by the level of devastation in Japan, Jordan and Israel are getting together to prepare for our own expected big earthquake.
. 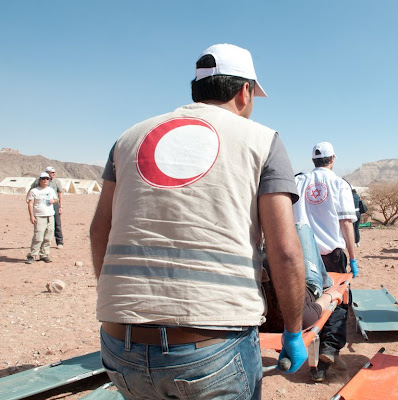 All photos by Dani Machlis/BGU
Is this not a heart-warming picture?
One stretcher-bearer from the Jordanian Red Crescent and one from Israel's Red Magen David.
. 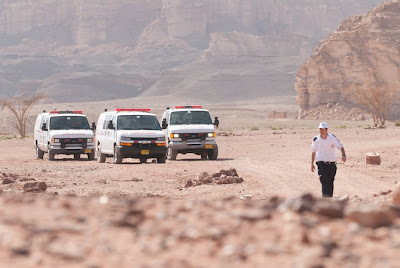 Photo by Dani Machlis/BGU
.
One week ago the two medical organizations and Ben-Gurion University of the Negev held an "Exercise Simulating a Response to an Earthquake" in Timna, down south in the Arava valley.
.
Ben-Gurion University's photographer, Dani Machlis, covered the event and he has very graciously agreed to share his beautiful photos with us for this post.
Thank you, Dani!
. 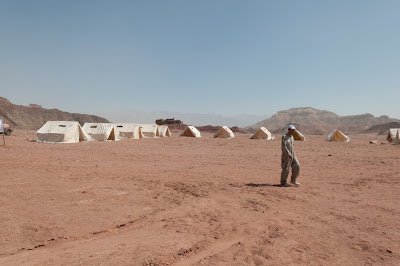 Photo by Dani Machlis/BGU
.
Two hundred people took part, including trained professionals that included academic faculty and students at BGU.
Together they treated the simulated "wounded" and set up a tent camp for those who would have been made homeless by a quake, for example, in the nearby cities of Eilat and Aqaba.
.
Students (including Jordanians) can study for a bachelor's degree in emergency medicine at Ben-Gurion U. medical school.
.
Please see more about the joint exercise in the Jerusalem Post.
. 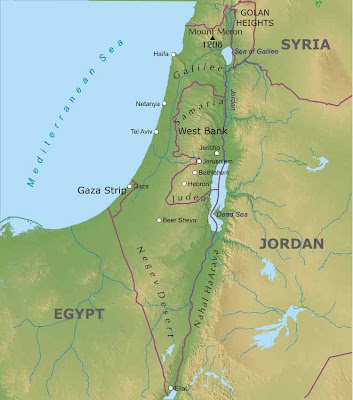 The earthquake-prone Great Rift Valley (the Syrian-African Rift) runs along the shared border of Jordan and Israel.
.
The Israeli city of Eilat and the Jordanian Aqaba are on the bottom of the map.
.
These troubled days we are greatly admiring Japan's embedded culture of preparedness and we will try to learn to be more like the Japanese.
Meanwhile, an Israeli team is setting up a field hospital in a hard-hit fishing village north of Tokyo and we are sending mattresses, blankets, coats, gloves and chemical toilets.
Our hearts and prayers are with the Japanese people.
.
.
(The J theme is a contribution to today's ABC Wednesday meme. )
.
Posted by Dina at 6:01 PM

How wondeful it would be if the first photograph were not so unusual.
Jane x

Nice photos. Let us not forget the ongoing trauma and unfathomable situation in Japan.

That's great everyone working together, let's hope it stays as a simulation

Its wonderful how they are working together. How sad that we have to make notice of it, that it doesn't seem to come naturally.
Very interesting and encouraging post Dina. Thanks for sharing.

Cooperation on all levels is a goal.

Such a wonderful initiative, for so many different reasons. May it be the first of many more.

Robin, actually it is not the first.
Yes, let's hope for continued and growing cooperation with Jordan.

What a hopeful situation. It's nice to see some good things happening.

Very interesting J and so pretty too.

Please come and meet the J's in my Family, hope to see you around, thanks!

It's wonderful to see people cooperating to prepare for a disaster. Hopefully, the Japan disaster will get the whole world evaluating how they should prepare for any calamity.

goodness; such common sense is so uncommon.

Israel hospitals have always taken in patients who need high level medical care, especially from Africa and the Middle East. And every young Jewish doctor in Israel had to do part of his/her Junior Residency year in an Egyptian or Jordanian hospital (does that still happen?).

But you are talking about something even better.. _shared_ health care and emergency programmes. I love that idea.

Wishing you all, that it will remain an exercise.

The first picture indeed in incredible. Maybe writing history in the making.

Please have a good Wednesday you all.

All those J's were destined to come together! Too bad it has to be centered around a crisis.

Also, thank you for sharing the map. We Americans tend to be geographically challenged regarding the Middle East.

I have just read on the front page of Haaretz: 'Israel must stop ignoring earthquake warnings', says the State Comptroller...

Hello.
I started to write blog in English.
I will write about everythinkg, will be a lot of pictures, reviews of books, films, songs etc.
So it would be nice if you visit my blog sometimes :)
(Sorry for mistakes, I'm still learning English)
http://biaanchi.blogspot.com

Great post. I just hope you are OK after the the terror attack in Jerusalem today...

My heart and prayers go out to all of you in Jerusalem.

Shalom friends. I am happy to read your ideas.

Helen, I never heard of that residency program but I'm checking on it with some doctor friends. Will let you know.

VP, Israel is woefully unprepared for a major earthquake.

Bianchii - Dawid in Poland, shalom and welcome! Your new blog looks very promising. And you are only 16?
Good luck with your writing, photography, and English.

Meryl, thank you.
I was happy to go start reading your valuable blog.