Life on the Cardo

.
The Old City by night is very different from the daytime version. 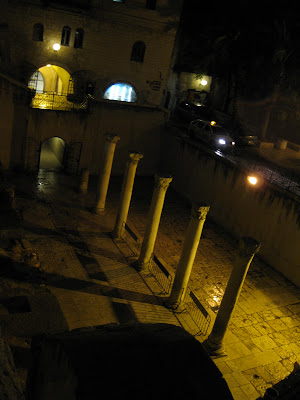 The tall columns of the Byzantine Cardo cast spooky shadows. 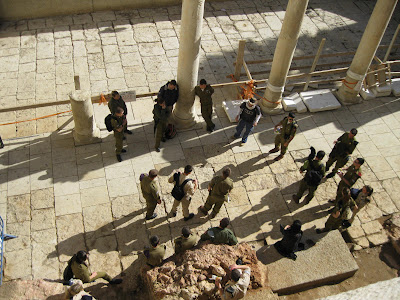 As part of their training, soldiers learn about Israel and Jerusalem.
The guide is probably telling the young men and women that they stand on the 6th century Byzantine Cardo, which was the continuation of the Roman Cardo. 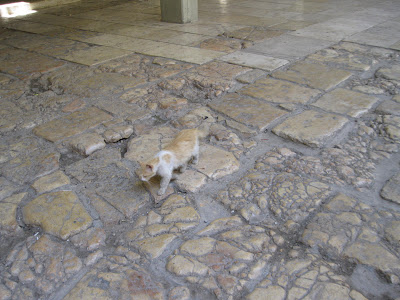 The Latin term cardo means pivot/"hinge"/axis, and by extension, the street around which city life revolves.
.
I wonder if pagan Roman Jerusalem had as many cats as the Old City does today.
. 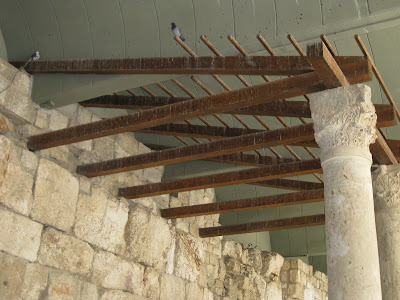 The Romans were big on urban planning and almost every city they built throughout the Empire had a cardo crossing the city from north to south.
You can see Jerusalem's main cardo, secondary cardo, and the recently discovered decumanus on the old Madaba mosaic map.
.
Jerusalem's Cardo Maximus was a wide stone-paved road with sidewalks, colonnades (a series of regularly spaced columns supporting an entablature and usually one side of a roof), and shops along its length.
.
These wooden bits in the photo were reconstructed to show how a shop would have been covered to keep merchandise dry in the winter and to shield merchants from the blazing summer sun.
The pigeon up there thinks it's a perfect perch!
How do you say pigeon in Latin?
.
.
With its animals and shadows, this post is for Camera-Critters and Shadow Shot Sunday memes.
.
Posted by Dina at 2:33 PM

Jerusalem it`s a lovely place in day and night, but different. I remember that place very well. You taking the atmosphere with your beautiful pictures.
Hope you have a happy weekend:-)

Interesting...I learn so much by visiting with you!!

LAKESIDE GEESE [and ducks] is my Camera Critter Link for this weekend.

Have a great day.

Wonderful shots. Love the soft light of the first one.

the contrast between the night and day shots are lovely...

Of the two photos (night/day), I prefer the night shot for its mystery and intrigue.

A shadow for one?
What fun, what fun!

A shadow for two—
In black or blue?

A shadow for five?
Coming alive!

I didn't know they have discovered the decumanus. I think the Latin word for pigeon is columba.

I love the yellow light in the first, and the spookiness of the shot. it wasn't until I enlarged that I noticed the wet on the stones. I love the kitty shot too. these are wonderful images Dina. happy SSS and have a beautiful weekend.

Jerusalem has more traces of the Romans than any northern European city. Every stone or rock has played a role in history! How interesting, Dina! I learn a lot by visiting your blog!

The latin for pigeon is columba.

Very interesting! And you are right, the night shadow at the top is sort of spooky. Then again, I find military training spooky too, in its own way.

WOW great shots!
I particularly love the night one!
Thanks for all the interesting info.
----
Daniela
http://isreview1.blogspot.com

Awesome, both the photos and the history. Jerusalem is one of the places in the world I must visit some day.

The Roman civilization really was incredible despite its excesses, among other things.

Thanks for the mini lesson! Very interesting.

I love inside the Cardo, during the day. It must have been elegant when it was built and has been restored to elegance now.

As if time stood still.

Please have a good Sunday you all.

That cat looks like it would like to meet up with one of those pigeons.
Your posts are always informative, Dina. I thoroughly enjoy them.
-- K

And fabulous shadows, too, Dina.
-- K

I love seeing the comparison between the day and night shots.

The first night shot is wonderful, great post and photos.

I like the night shot and the one taken from above.