(Photos can be enlarged with two separate clicks.) 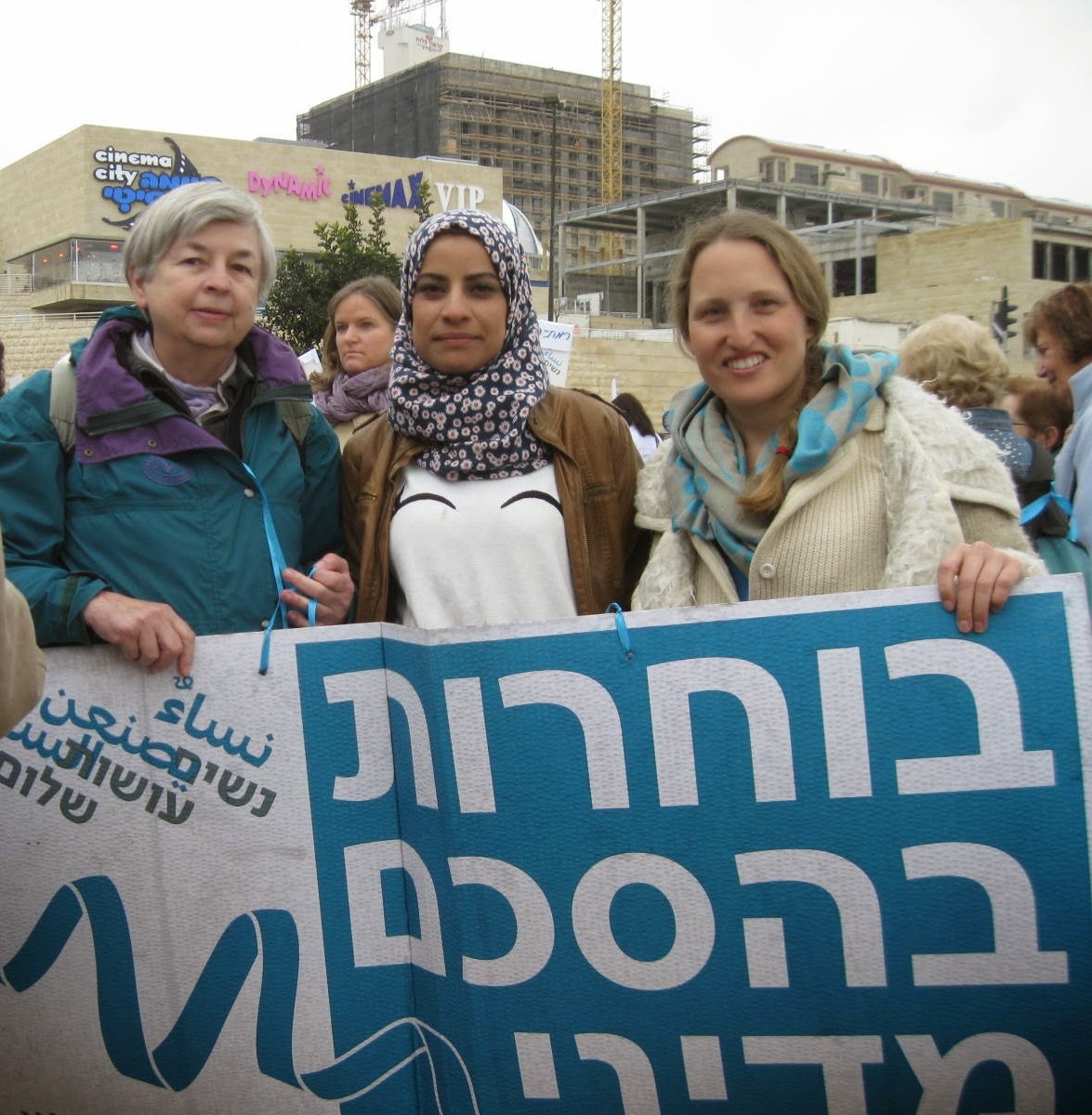 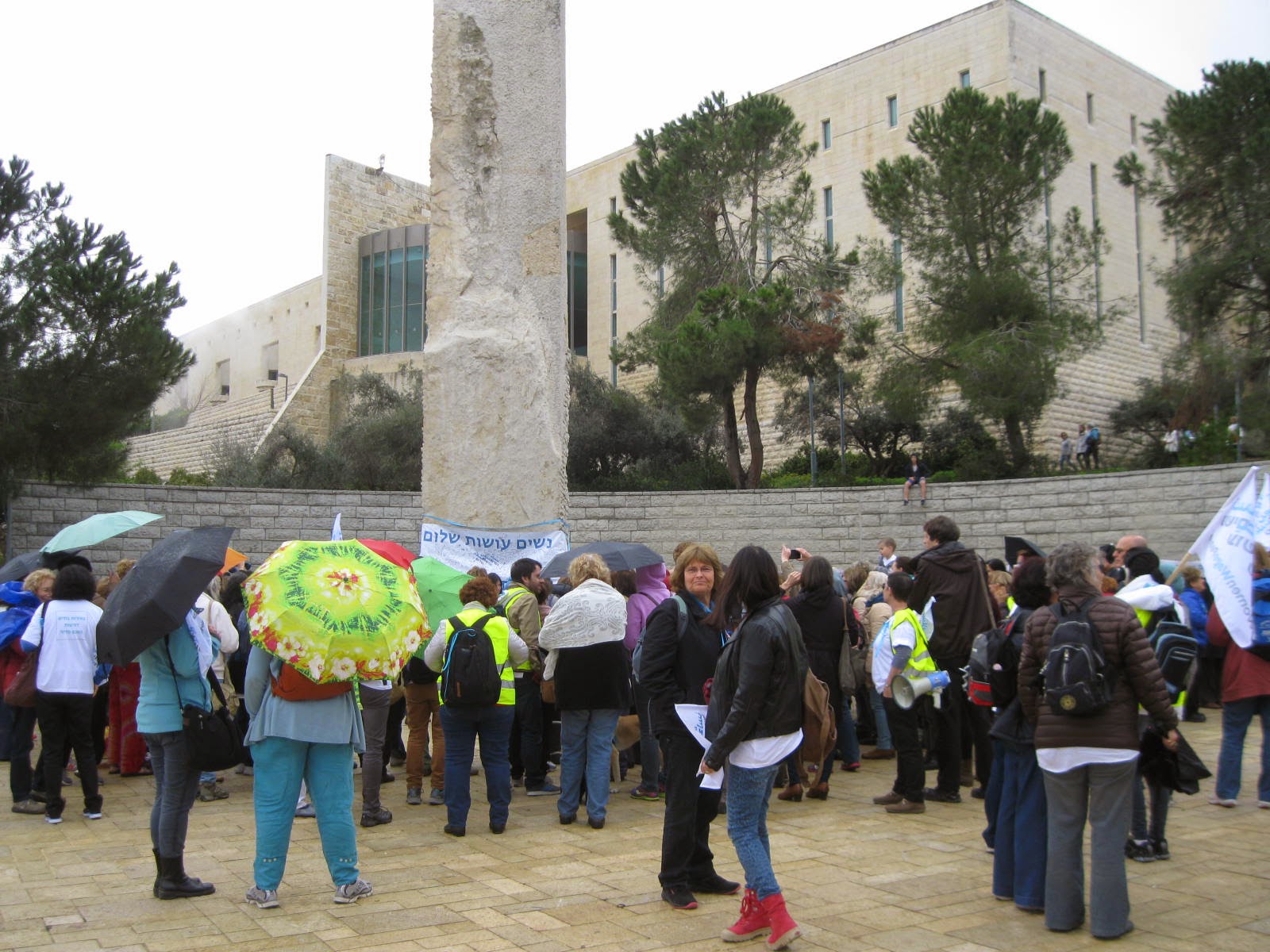 We met yesterday at the women's peace march in Jerusalem organized by the new non-political  NGO Women Wage Peace / Nashim Osot Shalom.
Thousands of women, both Jews and Arabs, came from all over Israel to make their voice heard.
We gathered at the memorial pillar in the square next to Israel's Supreme Court building. 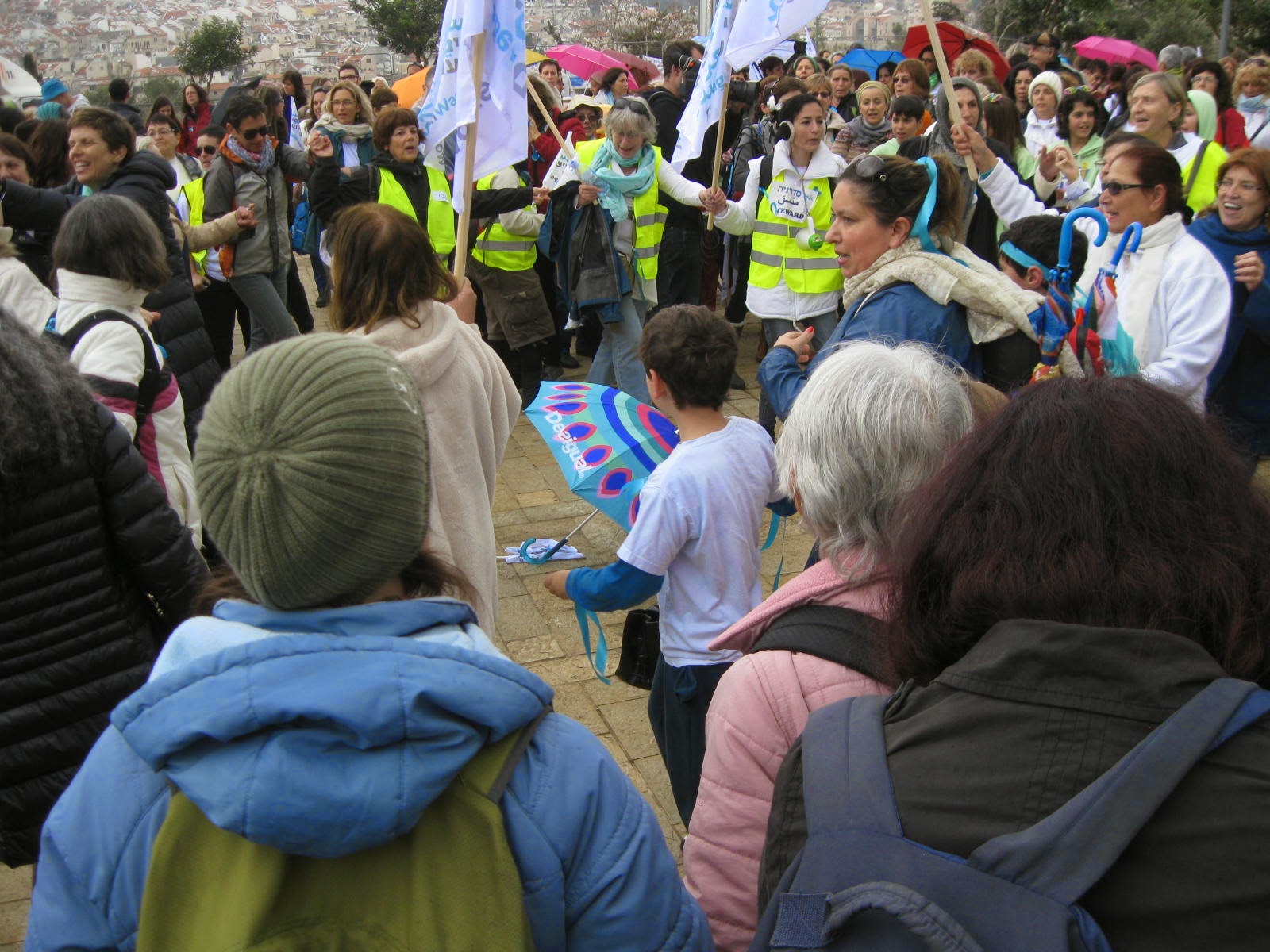 The warm-up on a cold Jerusalem day: circle dancing, music! 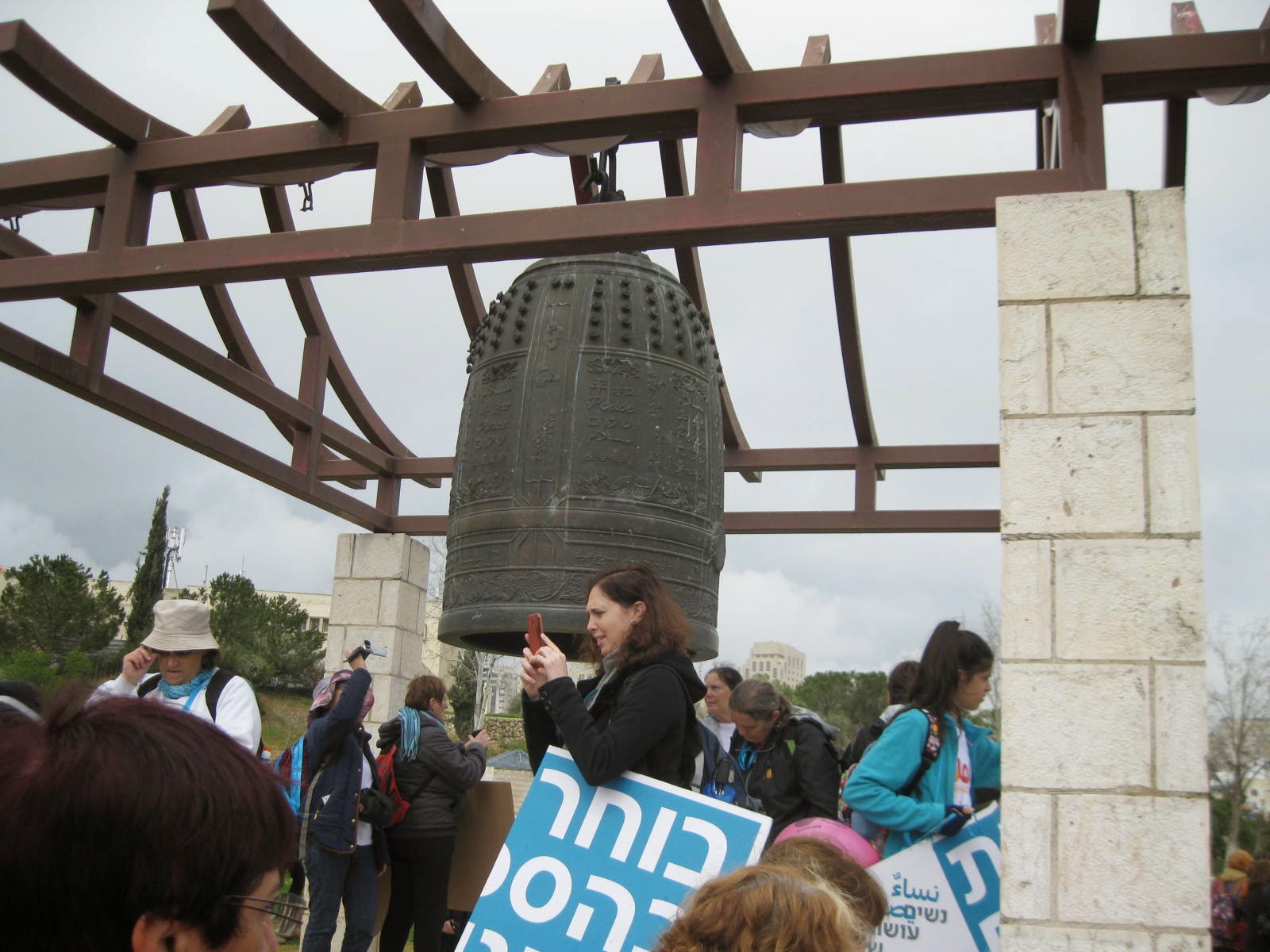 We set out on the march, pausing for photos at the Japanese bonsho peace bell. 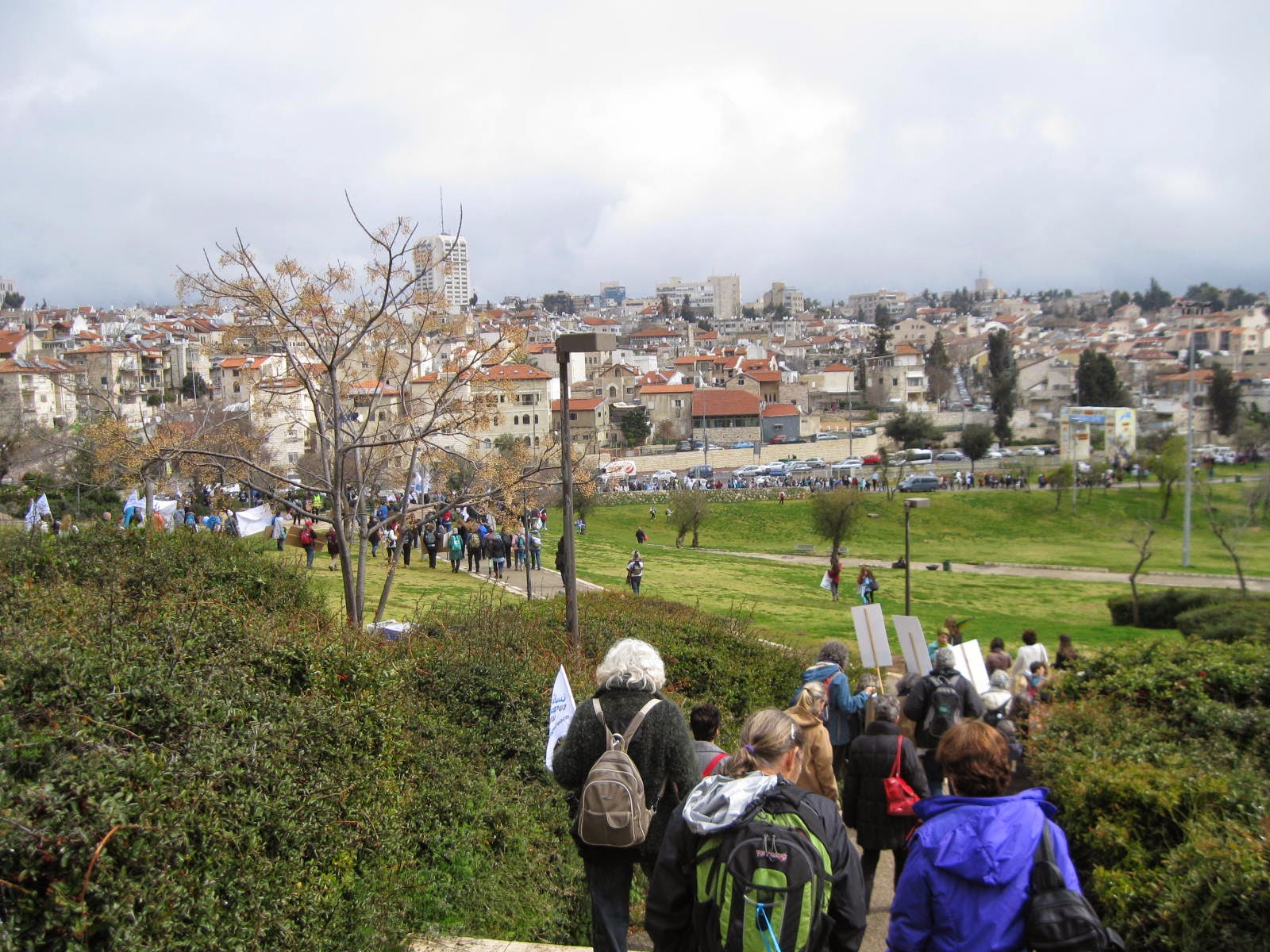 Down the hill and through the big Sacher Park. 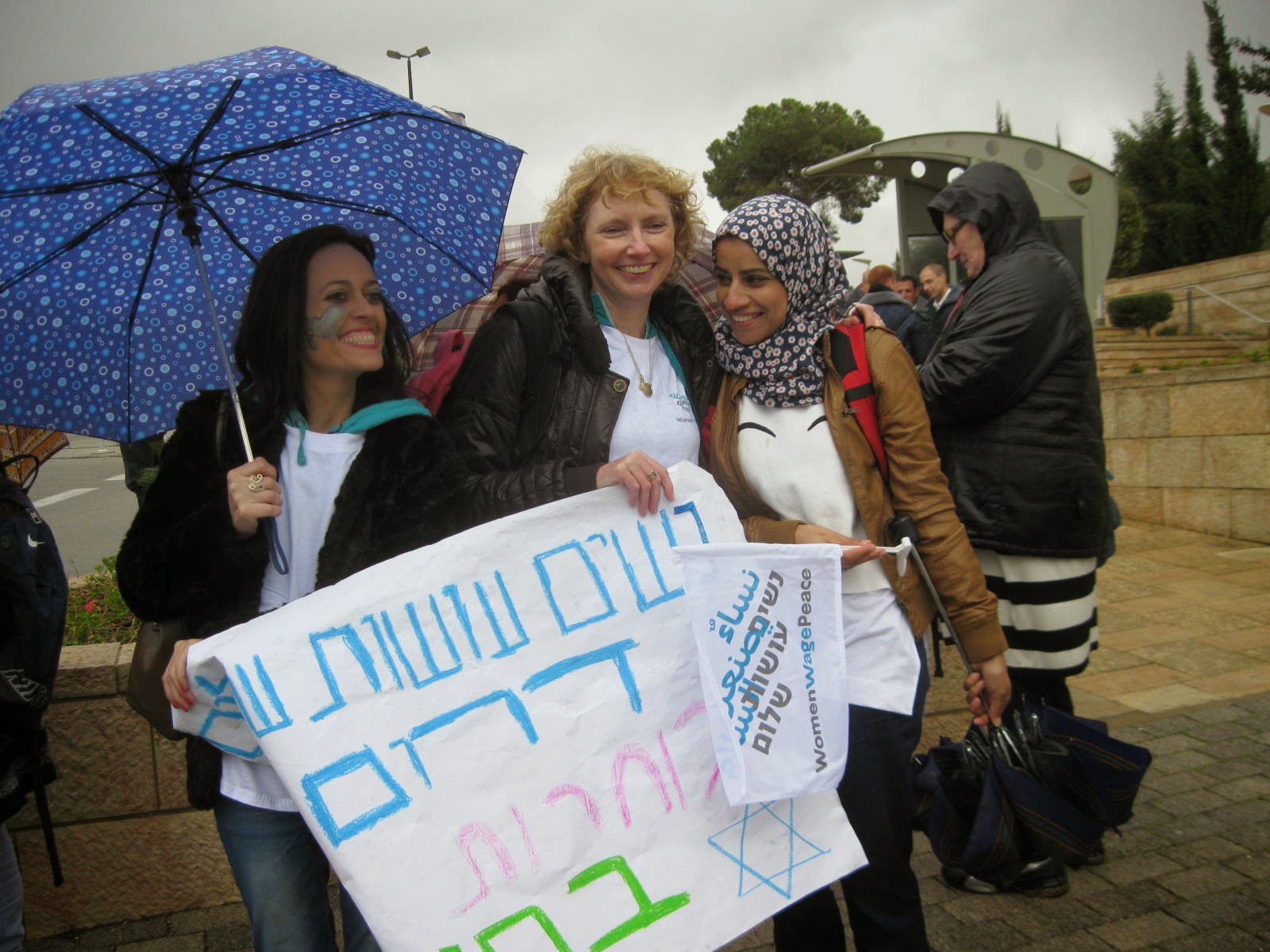 Women Wage Peace SOUTH.
Two of the organization's guiding lights from Meitar and our neighbor from the Bedouin town Hura. 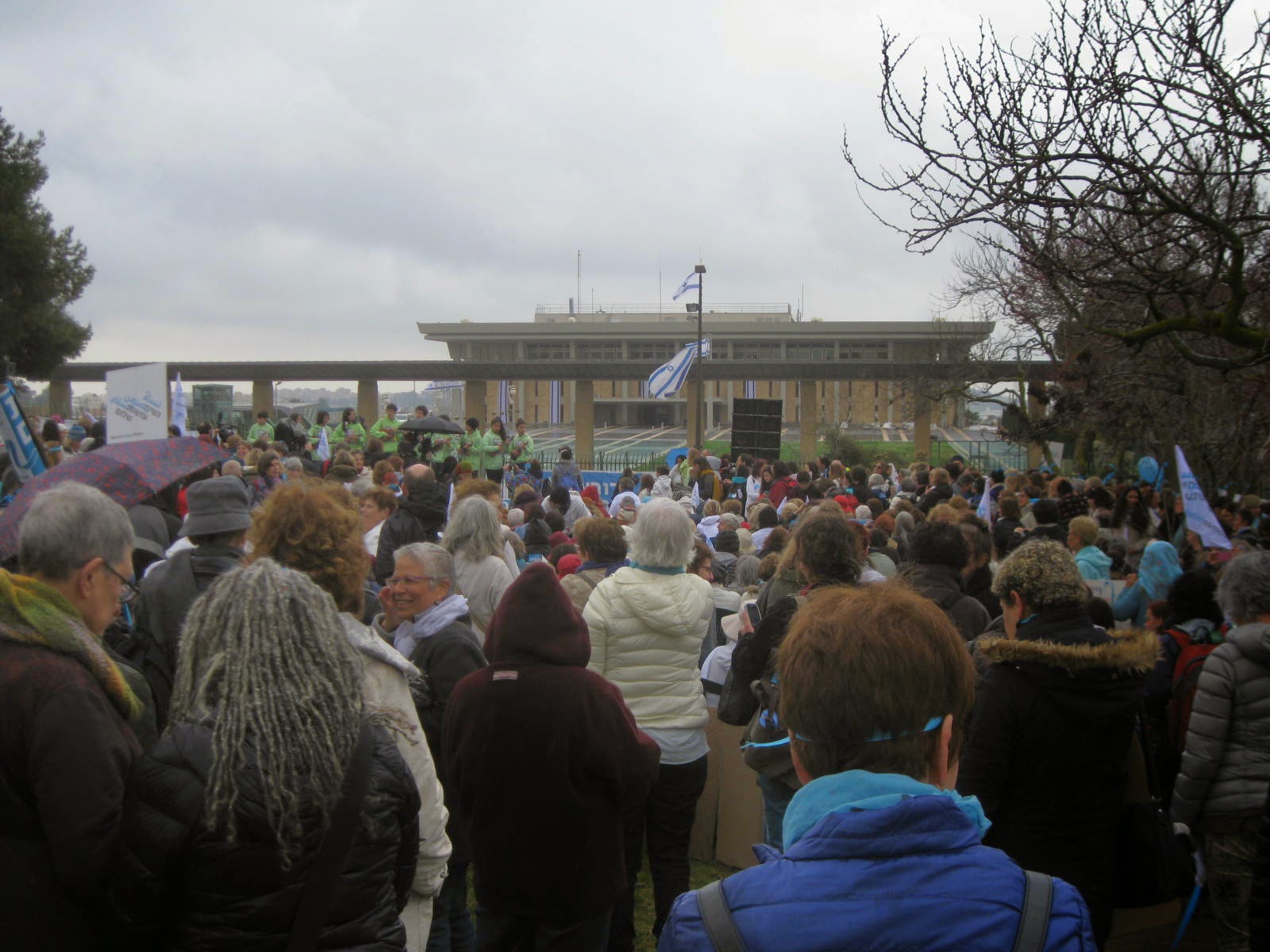 Facing the Knesset building, singing in the rain, and hoping our speeches, cheers, and applause would be heard and taken to heart by the country's lawmakers, policy makers, and voters.
Start talking peace so we can stop fighting wars, that is the message of many mothers, grandmothers, and wives of soldiers. 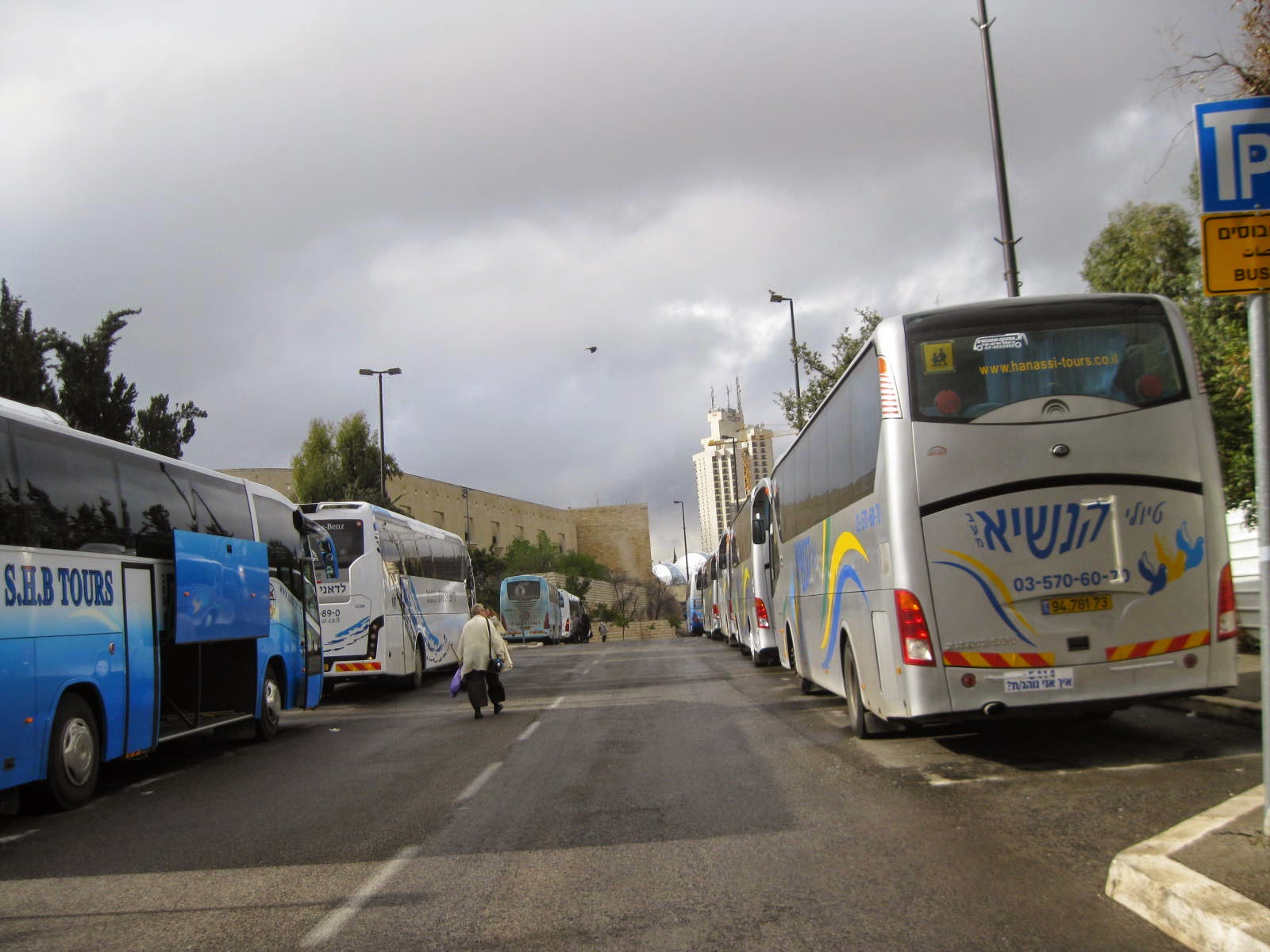 After hours of walking, circling the Knesset, and standing to hear speeches, we returned to the Supreme Court, where our buses waited to take us home, whether south to the Negev or north to the Golan. 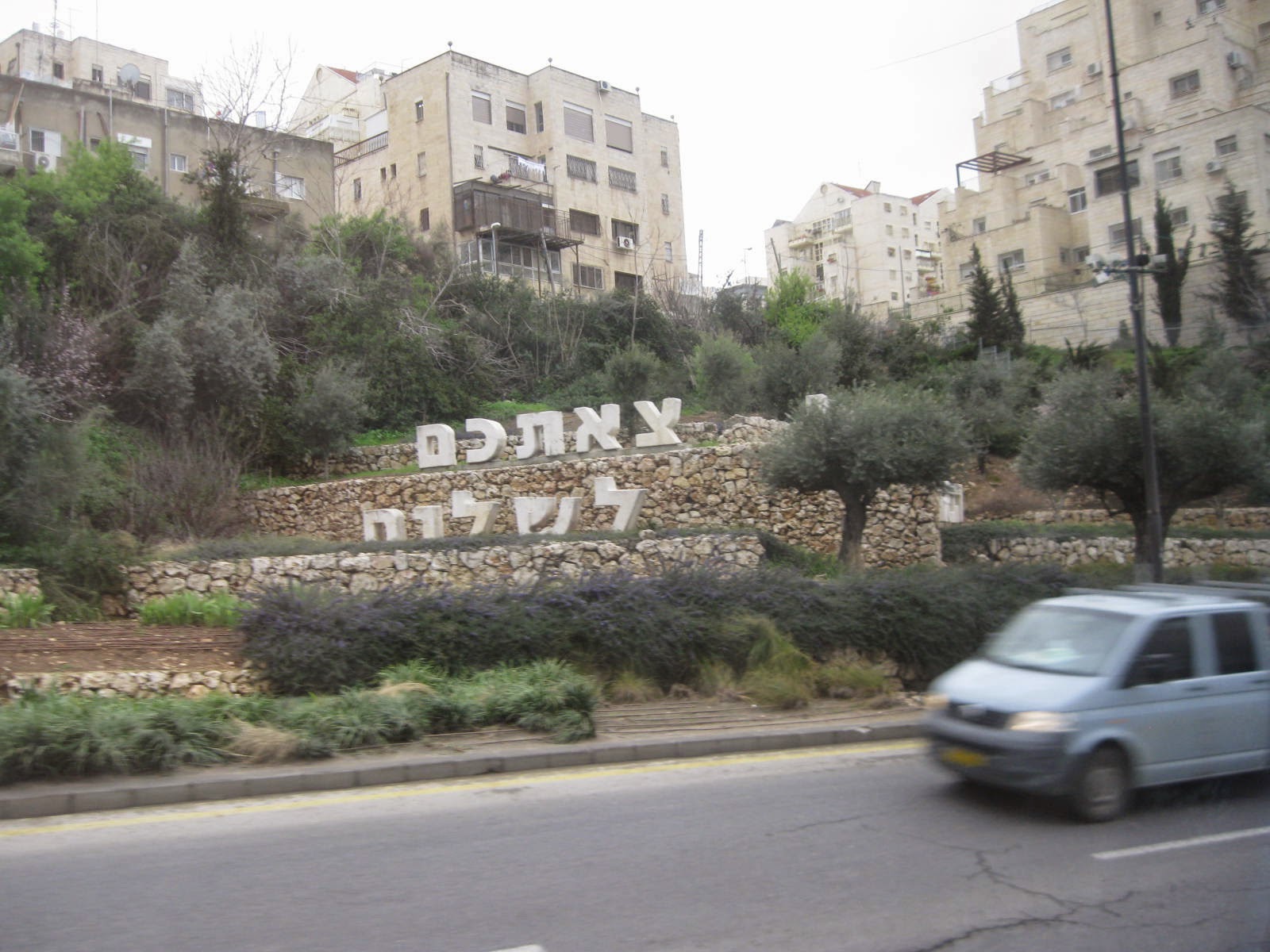 The message one sees when driving out of Jerusalem was especially poignant and hopeful yesterday.
Written in stone, the Hebrew says "Tsetchem la-shalom," literally, May your going out be toward peace.
.
A news video about our demonstration: http://www.i24news.tv/en/news/israel/politics/63184-150304-israeli-women-protest-for-peace-ahead-of-election

Newspaper reports:
http://www.jpost.com/Israel-News/Thousands-of-mothers-gather-at-Knesset-to-demand-Israeli-Palestinian-peace-accord-392948   The best expert quote here is " “Israel as a state is going through a kind of collective PTSD post traumatic stress disorder … and it’s time to help our people heal.”

And one in French: http://www.afp.com/fr/info/israel-un-mouvement-de-femmes-veut-reveiller-le-camp-de-la-paix

More photos of the march and more info at Women Wage Peace on Facebook.
Shalom!
.
Posted by Dina at 11:33 PM

If only they'll listen to voices of reason.

I'm struck by the expanse of the Knesset property.

William, I saw a video once about the wild animals which find refuge in the green areas within the Knesset's fenced periphery. It is the most guarded place, where no one will hurt the animals. There are even wolves!

Go sisters! I love it when women become politically active, motivated and noisy!

That sounds like a really worthwhile endeavor, whether it ends up bearing fruit or not.

"Sisters" is right, Hels. You go, Dina. Wage that peace for all the world.

Yes, may your voices be heard and heeded!

Amazing! When they are going to do the same in Tehran or Damascus?

Now, will the MEN who hold office and rule, please listen to these voices of reason?

Thumbs up. And nice to see a good picture of you.

I like that this occurred. But some commenters want you to do it on their behalf. That is some of the problem, in my mind. Those of us who vote with our mouse. We should get ouyt and wage peace, too. Peace, and equality. Many thanks for this post, Dina. It is inspiring. There are many marches, and demonstrations in Sydney, but I only ever seem to hear about them whrn they are covered in the evening news, ie post-fact.

I visit courtesy of the CDP portal (v4.0) newly released. Visit and see what you think ...

Julie, the new City Daily Photo portal is very clear and pleasant to the eye. So many bloggers from all over the world there.
Thanks for all your good work for CDP!

When women work together they can work wonders.. There was a situation here up in the Kimberley region where the Aboriginal women were so fed up being beaten up after their men drank too much, they got together and made their voices heard until full strength beer was banned in the town, resulting in a huge drop in domestic violence. Woman power!

Good on ya Dina!

I love seeing you, Dina. I wish those leaders would listen to the women. It's fabulous that women of so many faiths got together to call for peace. This is wonderful! I really love seeing the bonsho bell!