The Boat Chapel on the Sea of Galilee 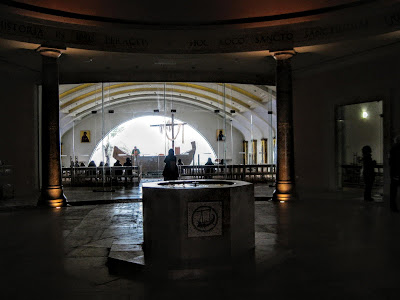 Continuing our posts on the Duc In Altum spiritual center at Magdala, here is the scene that greeted our large Jewish group when we entered the atrium.
Beyond the baptismal font and behind the glass doors--the unique Boat Chapel. 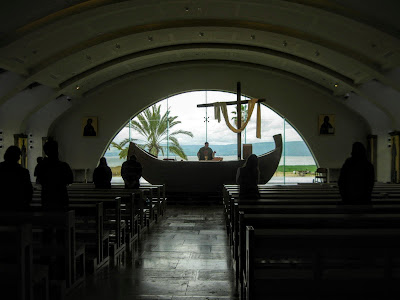 Mass was in progress so we did not go in. 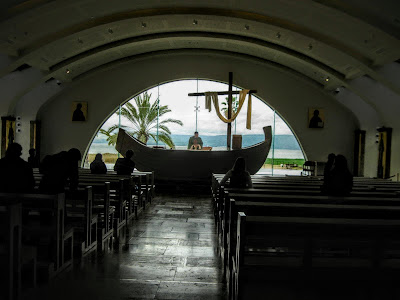 But still, I could see the priest with his hands over the chalice.
We could see the outline of the boat-shaped altar, as if floating on the blue waters of the Sea of Galilee right behind it. 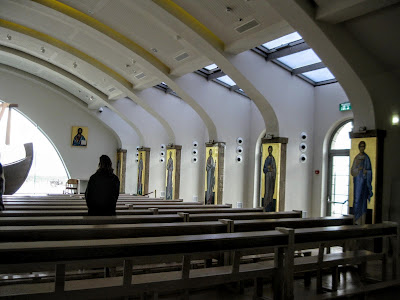 The 12 apostles on the sides.
And icons of Mary and of Jesus as Pantocrator in the front. 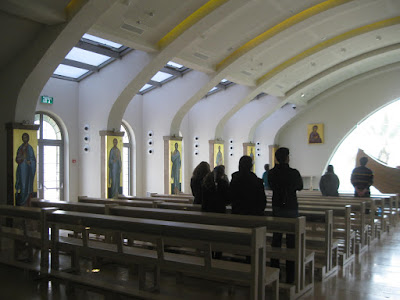 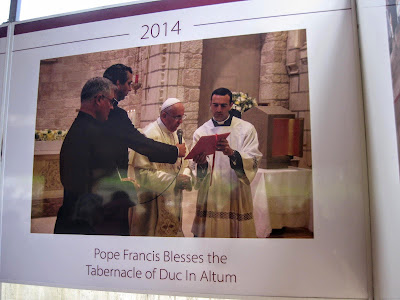 The square box to the right of the boat's cross (or mast and sail) is the tabernacle (where the Blessed Sacrament is kept).
Pope Francis blessed it during his visit to Israel in late May 2014.
Duc In Altum was dedicated in 2014.
On the left of the photo is Mexican priest Father Juan Solana, the driving force behind the whole conception and construction of the Magdala Center, which began in 2006 when he found and purchased these 20 acres of shoreline property for 16 million dollars. 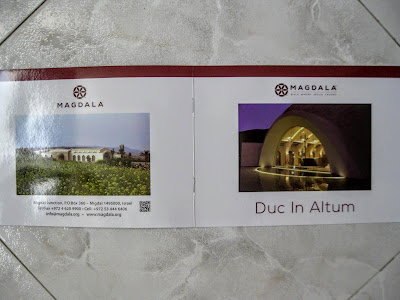 The glossy brochure shows the Boat Chapel from the outside looking in.
.
If you are still with me, here is a bonus, some really interesting points from the brochure:


So, dear readers, I think we can feel how some very dedicated Roman Catholics have invested much time, thought, prayer, and money in their vision of building, and also writing about, Duc In Altum.

(Linking to inSPIRED Sunday and Our World Tuesday.)
.
Posted by Dina at 11:19 PM

What a beautiful sanctuary!

Thank you Dina, for sharing this. I was wondering if there was any connection to the "Jesus Boat" and you answered that question. It would be a very inspiring and reverent place to visit. And being a "word" person, I looked on their website to find out what Duc in Altum means .... launch into the deep .... put out into deep water ... as Jesus instructs Simon Peter in Luke 5:4 (quoting from their literature).

I must say this is looks very original and inspiring.

Would ordinary parishioners have known the meaning of the boat chapel? It is modelled after the 1st century Jesus boat, but would the locals have been familiar with that story?

Hello Dina!
Another great post. I watch every picture with great attention.
When I was in Israel, I visited the Museum in which there is a boat from the time of Christ.
It was a huge impression.
Greetings from cold Poland.
Lucja

That does look a beautiful church love the altar

This must be a spectacular place to visit. Thanks for posting the photos and all the relevant information.

...lovely views into this beautiful church, thanks for sharing.

How creative to design the church so different from the usual. It is stunning. Thank you for the photos and interesting information.