.
The previous post talked about the ancient Lower Aqueduct system.
Today let's look at a huge reservoir that received the water that flowed through the Upper Aqueduct.
. 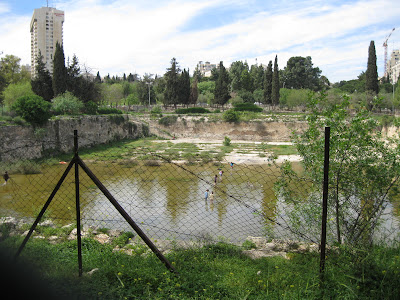 In April I was so surprised to see some water in Mamilla Pool!
Our heavy rains of February must have produced this rare phenomenon.
.
And what's more, a group of kids was wading around, searching the water!
Their teacher was there too. Maybe looking for tadpoles?
Please enlarge the photo; you will enjoy it!
. 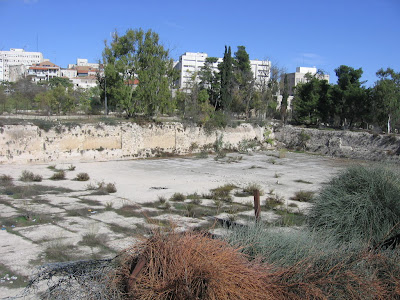 Normally it looks like this, dry as a bone.

Mamilla Pool is one of three reservoirs constructed by Herod the Great during the 1st century BCE.
Water passed slightly downward, through a channel 750 meters long, from the pool to another reservoir inside the Jaffa Gate. 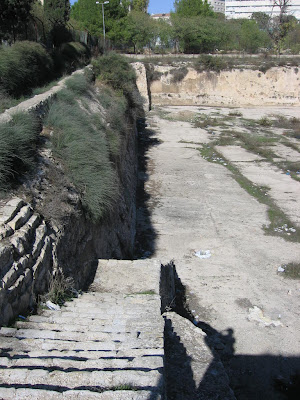 Mamilla Pool still served as a municipal reservoir during the British Mandate period.
It can store 32,000 cubic meters of water.
.
When the British left, in 1948, and the War of Independence broke out, the Jewish inhabitants had to use this water while the city was under siege. The Arabs had cut off Jerusalem's normal water supply.
. 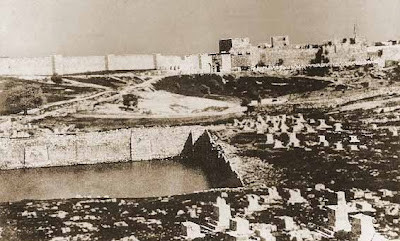 Photo from Wikipedia
This photo, probably from 1854, shows the pool with water, the city wall of the Old City, and the Jaffa Gate before a breach was made in the wall for Kaiser Wilhelm's entry.
.
Strange to see no buildings in the area.
The pool is in the middle of the Mamilla Muslim cemetery, which was in use from the 7th century until 1927.
.
Independence Park is just across the street.
.
Posted by Dina at 7:44 PM

Thanks for this interesting piece of history! I know so little of Israel and it is so important to learn these facts to understand more of our religions.

Thanks Dina, wish I had known this when I was there. Guess there should be another trip in my future.

I love reading your blog and enjoy the photos of beautiful Israel. How exciting to be part of these many digs and see firsthand remnants of history.

There is no doubt whatsoever that this piece of land belongs to the Jewish peoples, it was theirs, and is theirs and will be theirs forever.

I hear the thunders of war again for Israel, it just never ends does it, and I am so sad for all the innocent lives that will once again be lost. You don't mention anything regarding this soon coming conflict. I do hope that you are making preparations for your safety.

What an oppotunity for these children , to use an historic place as a "playground". I like the antique stair for the access.

To sum up, it has always been used from Herod up to nowadays !

Very interesting posts about the water system! And I bet those kids were having a lot of fun! :-)

Very interesting. I love the old photo, it shows how things are changing around us so rapidly..

Wow! What a neat find! Is it a problem when something that old is discovered in a cemetery?

This photo from the 1880s shows the arches already partly covered. Do you know if that was just the soil accretians over decades and centuries, perhaps with new building over the top? If it was intentional, it seems some seriously decent architecture was lost.

I like the comparison of then and now. The photos are wonderful, as is the educational factor.

I love how you combine the two, and it is one of the reasons I so love your blog.

These photos are absolutely fascinating, Dina. It's even more amazing to see these photos through the ages.