The picture that couldn't die

.
(Inspired by artist Pasadena Adjacent's fascinating weekly blog post called "Trash Tuesday: where getting it cheap is part of the esthetic.")
. 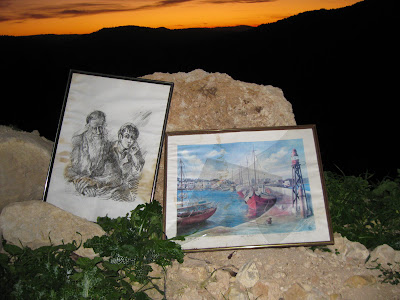 There's a lonely place over on the western edge of our mountain where I often walk to watch the sun set behind the far ridges.
The resident jackals always seem startled to see a human.
.
Well, one evening last January I was startled--to see this propped up against a rock.
Someone must have driven up, thinking to dump the slightly damaged pictures over the cliff, and then couldn't go through with it.
.
I had pity on the two Jews, the old man and the boy, and rescued them. 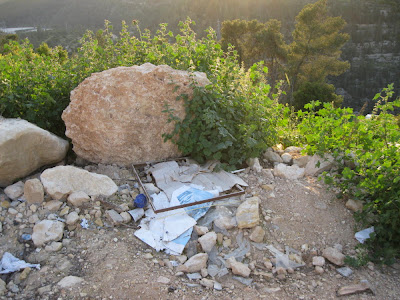 Sure enough, this was the fate of the other, the boat picture, two months later.
.
"Mine" turned out to be a numbered and signed sketch by well-known Israeli artist Yossi Stern, who died in 1992. Not that that matters. I simply became fond of the two souls he portrayed.
I thought Pasadena Adjacent would approve.
.
Posted by Dina at 4:34 PM

In a similar vein, «Louis'» mother once rescued a print that turned out to be a genuine Utrillo.

«Louis», liking ships and boats, would have grabbed BOTH prints!

Life is often a mystery, but not this time. :)

The one you rescued is great - perhaps you regret not rescuing the other too.

A nice story and a good idea!

What a very strange find! And look at the sky colour on the top pic!

Good art has a way of making itself found, doesn't it. What a lovely find for you.

There are some people that don't appreciate neither art nor other peoples work. I'm glad you managed to rescue at least one of them.

I enlarged your pic for a better look, and Denise I'm so happy you picked up the drawing of the old man and the boy - it's a very good sketch -wish I could scold the person who threw away the art.

Thankful that in the US there is a law against the destruction of an artwork.

It is amazing what one finds discarded sometimes. Good for you for giving this art a new home. Sad seeing the remaining piece in pieces.

You are right: The picture was worth while rescuing!