.
In my wanderings yesterday near the German Colony neighborhood, I was delighted to see the progress that has gone forward in the creation of the Jerusalem Railway Park.

I remember not so long ago when the Emek Refa'im section of abandoned tracks  was overgrown with brush; it had sat desolate since 1998.
In June 2011 I saw first signs of the railway's rehabilitation, although at the time I didn't realize  just how big a project was planned. 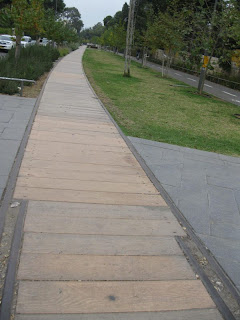 Now people can stroll on it and bikers can ride on the new bike path.
The Tichnun-Nof Landscape Architects'  guiding principle was "to create a harmonious sequence of pedestrian promenades, bicycle lanes, and a linear park creating an interlock between the neighborhoods on both sides."

The space between the 19th century iron tracks has been covered in colored architectural concrete with wooden overlays on the moldings.


More about this unique urban park:
the philosophy behind it  (and photos!)
and
practical information
.
Posted by Dina at 11:00 PM