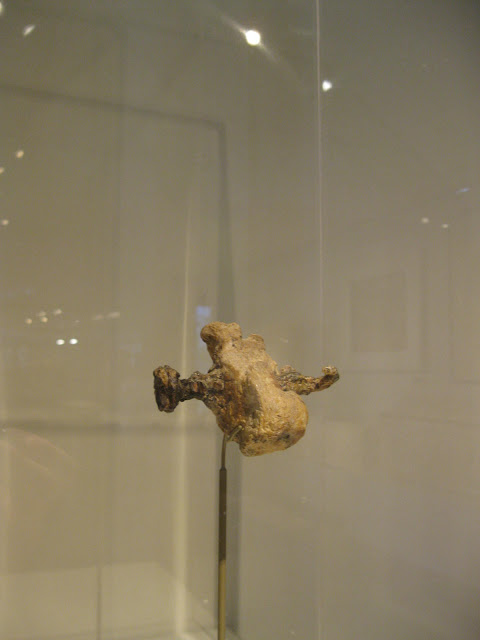 A heel bone with a spike driven through it.
Found inside a 1st century  ossuary in a burial cave in Jerusalem.
Our only archaeological evidence (so far)  of a crucifixion. 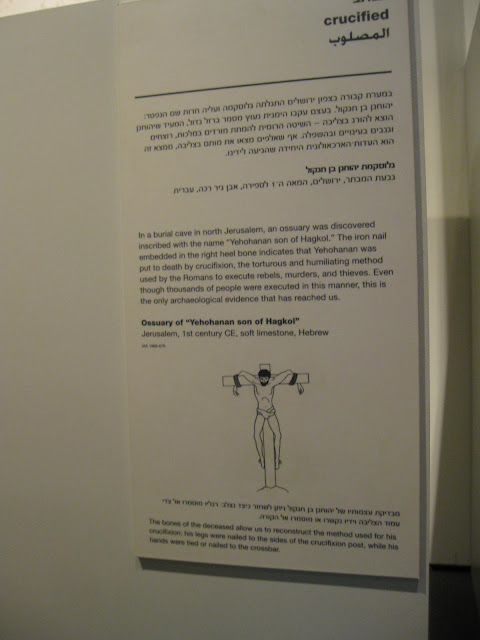 The Israel Museum sign for this gruesome discovery says

In a burial cave in north Jerusalem, an ossuary was discovered inscribed with the name "Yohohanan son of Hagkol."
The iron nail embedded in the right heel bone indicates that Yehohanan was put to death by crucifixion, the torturous and humiliating method used by the Romans to execute rebels, murderers, and thieves.
Even though thousands of people were executed in this manner, this is the only archaeological evidence that has reached us.
. . .
The bones of the deceased allow us to reconstruct the method used for his crucifixion:
his legs were nailed to the sides of the crucifixion post, while his hands were tied or nailed to the crossbar.

.
You can watch a live telecast on your computer soon of the Way of the Cross of Good Friday, from the Colosseum of Rome, at http://www.vatican.va/video/index.html
Pope Francesco will preside.
The meditations for each station of the cross were written this year by Lebanese Christians.
It starts a little after 21.05 Rome time (7.05 in Sydney, 13.05 in California, 10.05 in Hawaii).
Afterwards it will be available on video at the same Vatican Player website.

The printed Way of the Cross meditations are online now.  Very appropriate for the Middle East.
.
.
Posted by Dina at 10:10 PM